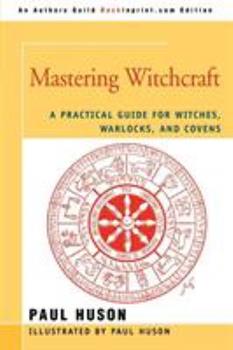 Mastering Witchcraft: A Practical Guide for Witches, Warlocks, and Covens

An enduring classic since its publication in 1970, Mastering Witchcraft is one of the best how-to manuals for those wishing to practice traditional European Witchcraft as a craft rather than a New Age religion. Starting from first principles, Huson instructs the novice step by step in the arts of circle casting, blessing and banning, the uses of amulets and talismans, philters, divination, necromancy, waxen images, knots, fascination, conjuration,...

The original is still the greatest!

Published by Thriftbooks.com User , 14 years ago
I'm one of the oldsters who purchased this very book in the early '70's. I was (and still am) entranced by the soaring prose that this book embodies. It set me on a life course that meandered ofttimes, only to return me to itself. I recall very well how the myriad burgeoning neo/pseudo-Gardnerians of the '70's and '80's turned their noses up at it and always bashed both the book and its highly knowledgeable author. I recall reading all of the literature that began to appear under the aegis of Mother Ll and felt a pervasive sense of disappointment in that not one other book resembled in any way Huson's masterpiece, neither in content nor in the soundness of his recommended practices. And this was before the (so-called) "Wicca" emerged in the '90's, striving to "teach" those good little girls and boys who actually wanted to be like the "good witch" Glenda: behold - a great tradition trivialized and emasculated to serve a number of sociopolitical agendas that have nothing to do with true Traditional Witchcraft, such as that which Mr. Huson promoted. I am gratified that in this first decade of the "new millenium" various and sundry exemplars of bona fide European, particularly British, Traditional Witchcraft groups of great antiquity are coming forth and challenging all the pink fluffy bunny crap and rhetoric we've been subjected to for over 3 decades. Mother Ll has tried to keep up with this challenge by its offerings in "goth" and "nocturnal witchcraft," but these too fall short. "The emperor in new clothes" and all that. Over and over again Huson's original work continues to enthrall new audiences just as it did me over 35 years ago. As I said, the hauntingly beautiful prose that one finds in "Mastering Witchcraft" stands in sharp contrast to the teddy bear writings of the self-styled "Wicca" authorties. The book appears in a few editions but (as far as I can tell) it has never had to be edited or modified in any way. Its longevity and ability to stand on its own merits attests to its great value for all Trad Witches, new and long-established. If you're a newcomer, read this book first. Then go to authors like Cochrane and others who have expanded our understanding of Traditional Witchcraft where Huson left off.

Published by Thriftbooks.com User , 15 years ago
For most of the past four decades, Paul Huson's seminal work "Mastering Witchcraft" has remained in print. That alone should be a testament to its worth on the subject of witchcraft. An early reviewer in the 1970s called it a "genuine vade mecum" (do it yourself guide). The reviewer? Catholic Weekly. From the opening pages to the resources and bibliography, this book contains much to set your mind thinking and your magic brewing. Yes, parts of it are dated somewhat (the recitation of "the Lord's Prayer" backwards as a breaking ceremony has fallen much out of use to my knowledge, but back then it was fairly common) and the book is very much Not Politically Correct, which is just fine with me! It is my firm belief that without this book, it is unlikely that we would have other fine texts such as those by Mike Howard, Nigel Jackson, and others who write on the subject of traditionalist witchcraft. If you are looking for yet another Wicca 101 book, head over to the Big Ll Publishing Company and find the latest by Ravenwolf. If you are looking for something with substance, you will likely not find anything better than this to begin with.

Should be in every real Witches collection!

Published by Thriftbooks.com User , 17 years ago
This was my very first real witchcraft book, way back in 1974 when I turned 9. It is a wonderful little book and a good introduction to the practice of real witchcraft, unlike many "cotton candy", new-agey titles out there these days. I will always have a soft spot for it! As for the word "warlock", which did come to mean "oathbreaker", scholars can trace the origins of "warlock" back to the Old Norse "vardlokkur", meaning, "song that conjures spirits". Educated Witches know this, so the word is not a problem for them. (Check out Wikipedia and it's links on "warlock" for more information~http://en.wikipedia.org/wiki/Warlock) This book helped to spare me the hideous fate of being sucked into the modern glitter-fluff, spell-kit commercial mill, and for that I am *most* thankful. Simply a classic! For more non pop-wiccan craft, check out Robert Cochrane, Nigel Jackson, Evan Jones and "Witchdom of the True" by Edred Thorsson as well as a wide selection of heathen books now available... Enchanted be!

The First and Best book on Witchcraft Ever!!

Published by Thriftbooks.com User , 18 years ago
Mr Huson is a Genius in my eyes. Mastering Witchcraft has nothing to do with Religious Witchcraft movements, it has nothing to do with Karma or the Three Fold Law, in fact it has nothing to do with the New Age Witchcraft movement of modern times. This book does not hold its punches back, the book is well balanced with both positive and negative magic, what New Agers label as Black and White Magic. I am a big fan of Mr. Huson's work and enjoy his other books and novels. "The Offering" is a must read for those who want a Horror based on African Macumba (Vodou) magic, laced with Santeria. But this by far has to be one of my favorite books of all time. While more receant books on Witchcraft have to do with Religion, and Karma, Mastering Witchcraft has to do with the ancient art of Witchcraft, leaving the religion aspect out of it. There is one part of the book though that made me laugh a bit. The "Our Father" backwards. Being Hispanic a Santero, Espiritista and a Brujo I often use the old Padre Nuestro, "Our Father" as is, because in itself it is a very powerful prayer in working Magic as are may Psalms. But besides the Our Father backwards, this is your choice if you use it backwards or not, the book is a must have for all Witches. Many people ask me if I could recommend an English book on Brujeria as practiced by Hispanics, well this is as close to brujeria as you can get. Many people who gave it a negative are basically Wiccans. I respect Wiccans I just hope that they someday realize that all that is Witchcraft does not make it Wicca. One Wiccan reviewer talked like a Christian when he stated. "The Book tells you that in order to practice Witchcraft you have to sell your soul-- and that the book never tells you to whom. Basically as a Brujo we are taught that God rules over all things, Negative and Posative, Good or Bad. When you decide to practice Magic and Witchcraft you are in a sense selling your soul. Or dedicating your Soul. If you are a Christian Witch you sell your Soul to Yhvh, if you practice Lukumi you sell your soul to your Ruling Orisha. (Selling your soul is dedicating your soul.) In the same if you are a Satanist you sell your Soul to Satan. But all things are of God, evil and good. So if Satan is of God, and you sell your Soul to Satan, you sell your Soul to God. Anyway this is a good book, a bit controversial, but a must read to all Occultists, Witches, and yes even modern day Warlocks, they exist in Spanish they are called Diableros. I someday hope Paul Huson one day writes a second book on the subject, but until then, check out his other great books.

THE BEST WITCHCRAFT BOOK - EVER!! HANDS DOWN!!

Published by Thriftbooks.com User , 19 years ago
I see a lot of debate here about "Mastering Witchcraft". That alone is good, because the more homogenized I see Wicca get, the farther I distance myself from it. I own a metaphysical store and give tarot readings for a living. I've been a high priest for over 20 years. This was the first book on witchcraft I ever read, and nothing since even compares to it. Yes, there are flaws - and you have to consider the time in which it was written. The late 60's. People did not have to be politically correct then, and they weren't. Paul Huson took the best information he had, and in step with his times, he presented it in a better way than anyone has since. It is a little arrogant sometimes. He doesn't back away from the dark side of magick or pretend it doesn't exist like a lot of Wiccan writers that followed him. Huson is not writing about Wicca, he is writing about practicing a craft that may or may not be attached to a religion, a crede, or a system of morals. I am not a child. I don't need my magickal instruction sugar-coated. His version of the symbology is used by almost every witch and Wiccan to this day, even thse who decry his "amorality". Huson has done a lot since. "Mastering Herbalism" is one of the best herbals out there - and he has a book on ESP, two books on the Tarot, and a good horror novel from 1979. As far as I know he's still alive. In the years following his books, he did a lot of producing and writing for television. "Family" with Kristy McNichol, et. al, and "James at 15" in the late 70's, "The Colby's" in the 80's (a spin off of "Dynasty"). The man is quite prolific and diverse in his talents...I am glad that someone put together what he did, when he did it because there's nothing like it now. He has compiled more solid, and yes - amoral - information in 256 pages than most people can do in a thousand. Every practitioner of magick should have this book in a treasured place on their shelf. Learn from it, take what you like, reject what you don't, and enjoy the read and the concise reference.
Trustpilot
Copyright © 2022 Thriftbooks.com Terms of Use | Privacy Policy | Do Not Sell My Personal Information | Cookie Preferences | Accessibility Statement
ThriftBooks® and the ThriftBooks® logo are registered trademarks of Thrift Books Global, LLC