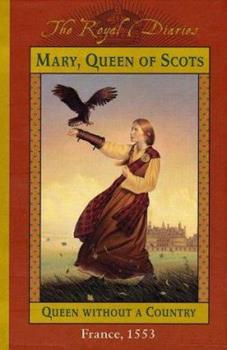 Mary, Queen of Scots: Queen Without a Country, France 1553 (The Royal Diaries)

(Part of the The Royal Diaries Series, My Royal Story Series, and Mon Histoire Series)

Mary, the young Scottish queen, is sent a diary from her mother in which she records her experiences living at the court of France's King Henry II as she awaits her marriage to Henry's son, Francis.

Great addition to a wonderful series!

Published by Thriftbooks.com User , 19 years ago
I love the royal diaries! It is great to see how famous queens and princesses once lived. This book was great!Mary Queen of Scotts talks about Mary Stuart, who even though is the Queen of Scitland, she lives in France! Her best friends (4 of them) are not only her lady-in-waitnings, but they also share her name! Mary calls them the Queens Mary's, or her lucky 4-leaf-clover. It also shows Mary's cousins, Elizabeth and Mary. This book is a great addition to the Royal Diaries, and if you are a fan, you defiantley should read this book!

Published by Thriftbooks.com User , 19 years ago
Mary Queen of Scots is a great new Royal Diary Series. It gives meaning to the "royal" in Royal Diaries. For this girl is a Queen at 9 months, but life as a queen is not all fun and games like a queen or princess is often portrayed. Before reading this excellent book, I would recommend reading Elizabeth I first. In Elizabeth, it talks about Mary Queen of Scots as a young infant and in reading elizabeth it will connect the series for you. Enjoy!!

the Queen of Scotland is a kind person

Published by Thriftbooks.com User , 19 years ago
...This edition to the Royal Diaries series presents Mary Stuart, Queen of Scotland. Yet, she doesn't live in Scotland at all. She lives in France, where she lives amoung the king's court and is friends with his children. I thought this book was exellent. It comes from a person that sounds like a nice friend. My favorite part(s) of the book is when she talks about the king's children(Fransis, Elizabeth, Claude, and Margurite) and her ladies-in-waiting like if(and they are) the best of friends. That makes you think of Mary more as an adolesent girl rather than the Queen of Scotland

Published by Thriftbooks.com User , 19 years ago
11-year-old Mary was only nine months old when she was crowned Queen of Scotland, succeeding her father. However because of many conflicts she is separated from her mother and Scotland to live with the French. To forge an alliance with France, she is bethroled to Francis, the son of King Henry II. Mary is sent then to France to live with her new "parents" King Henry II and his vicious and jealous Queen Catherine de Medici. It is there that Mary begins her chronicle of her journal. Life there in France is pretty much every day life for Mary. She enjoys going to dances, and playing with her future husband Francis. But she loves hawking the best. However the charming Mary's life is made very difficult by the vicious jealous Queen Catherine de Medici. She finds confort though in Henry's mistress Diane de Poitier who was quite the lady and gave Mary strength and inspiration through good and bad times. This was another ideal great Royal Diary. Like any other Royal Diary it had a part that explained the real history of Mary and it was sad to learn of her tragic ending. Like Francis said he and Mary were really chess pieces on a big chess board and a wrong move could ruin things.

A great new book from the Royal Diaries series.

Published by Thriftbooks.com User , 19 years ago
Mary became Queen of Scotland when she was just a baby, after the death of her father. But in a time where alliances among the powerful nations of Europe are important, Mary is sent away from her home at age five to live in the court of King Henry II of France, where she will be educated and live as one of the family until she old enough to marry Henry's son, Francis. The year is 1553, and Mary is eleven. She longs for her homeland, and for her mother, but is good friends with nine-year-old Francis and the other royal children. In her diary, Mary describes her daily life over one year. She may be a queen, but in many ways Mary is just like any eleven-year-old girl, enjoying fun and games. but at the same time longing to return to her home and mother. I really enjoyed this wonderful new Royal Diaries book, and I recommend it to all fans of the series.
Copyright © 2022 Thriftbooks.com Terms of Use | Privacy Policy | Do Not Sell My Personal Information | Accessibility Statement
ThriftBooks® and the ThriftBooks® logo are registered trademarks of Thrift Books Global, LLC