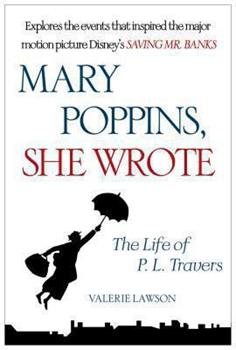 Mary Poppins, She Wrote: The Life of P. L. Travers

The remarkable life of P.L. Travers, the creator of Mary Poppins. An arresting life...Lawson is superb at excavating the details. - Library Journal The spellbinding stories of Mary Poppins, the quintessentially English and utterly magical nanny, have been loved by generations. She flew into the lives of the unsuspecting Banks family in a children's book that was instantly hailed as a classic, then became a household name when Julie Andrews stepped...

Some Light on and Elusive Personality

Published by Thriftbooks.com User , 15 years ago
Lawson provides some information on a fellow Australian, who despite protestations to the contrary, may have wanted someone to present a biography of her. Travers left notes and diaries but it appears to be information and not real knowledge. Her life was mirage, down to her name, national allegiance and way of relating to her mentors, adopted son and sponsor, Walt Disney and his staff. The book tells the story as much as it can be told.

Published by Thriftbooks.com User , 15 years ago
Valerie Lawson has done something P. L. Travers claimed she didn't want anyone to do: write her biography. It's a very good book. Travers discouraged personal questions in interviews, and preferred to discuss her work and, in later years, her philosophy of life -- the essence of experience as opposed to the mundane details of living. Lawson makes the case that if Travers had been serious about this she would have destroyed her papers -- which she decidedly did not do. Whatever her true feelings on the matter, this is a fascinating book, filled with insights into Travers' life and work, and with a respectable amount of attention to the work itself, especially the meanings and importance of the Mary Poppins books. I think Lawson gives somewhat short shrift to Travers work with Parabola magazine, which is some of her most brilliant writing -- inspiring to thousands of her readers, and collected in the now out of print "What the Bee Knows." (Note to publishers: bring it back!) You may also find out more than you want to known about her endless toing and froing with Disney, and the ways in which the movie deal echoed through the last thirty years of her life. But Lawson also gives the first comprehensive account of Travers' private life, her involvement AE and Gurdieff, her adoption of one twin, her son Camillus, and her early career as an actress. Her love affairs are touched on. I'm not sure, in the end, if all the private matters, interesting as they may be, really add to our understanding of Travers' work, though Lawson makes some persuasive connections between the fantasy and the reality. Mary Poppins herself, the Great Exception, survives the biography with her mystery intact, and in spite of Lawson's sympathetic and thorough craftsmanship, so does Travers. For those of us lucky ones who count Travers as a touchstone in our lives, that's just fine. Questions without answers can often be more satisfying than the other kind.
Trustpilot
Copyright © 2022 Thriftbooks.com Terms of Use | Privacy Policy | Do Not Sell or Share My Personal Information | Accessibility Statement
ThriftBooks® and the ThriftBooks® logo are registered trademarks of Thrift Books Global, LLC