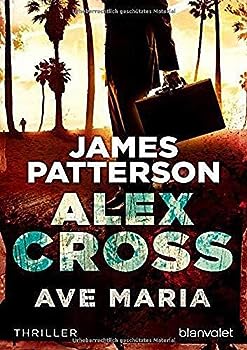 FBI Agent Alex Cross is on vacation with his family in Disneyland when he gets a call from the Director. A well-known actress was shot outside her home in Beverly Hills. Shortly afterward, an editor... This description may be from another edition of this product.

Published by embossing , 1 year ago
iv'e always like patterson i like that the plots are entertaining but well thout out

Published by Thriftbooks.com User , 15 years ago
Alex Cross decides to take Nana Mama and his kids on a much deserved vacation to Disneyland. He needs this time off with his family, but alas, who should he run into while he's there, but James Truscott, a pesky magazine reporter who seems to think Cross is the guy he needs to cover. Needless to say Truscott is not Alex Cross' favorite person. And par for the course, Cross' vacation is cut short when he gets a call from the FBI director. A famous actress has been murdered in Beverly Hills and he'd like Alex to investigate. Then the editor of the L.A. Times gets an e-mail from a mysterious Mary Smith describing the murder. More famous stars are murdered and more e-mails arrive from Mary Smith and now Alex is on the hot seat as people begin to wonder who's next on Ms. Smith's hit list. She's a serial killer, that's for sure, but is Mary really a she? Most serial killers are men, so what is going on? Maybe Mary's an actor trying to weed out the competition. Can Alex sift through the messages, find the clues, catch the killer, while dealing with his own stalker, that reporter Truscott? What do you think? But like with all James Patterson's Alex Cross books, it's not the ending we crave so much as the ride and this is one heck of a ride. Oh yes, the ending just might surprise you.

Published by Thriftbooks.com User , 15 years ago
James Patterson delivers another wonderful story in the Alex Cross series. I can't wait to read the next one! As usual, it's edge-of-your-seat suspense in Mary, Mary!

Quite Contrary - here's a little note for you ...

Published by Thriftbooks.com User , 16 years ago
Women on Hollywood's A-list are being murdered. The kills are vicious, and therefore personal. A good twist in this story is the You've Got Mail aspect as an entertainment writer receives missives written to the dead women through his email. The messages detail exactly how the murder occurred even to the surprise on the victim's faces; they are signed Mary Smith. Alex Cross takes his family on a vacation to Disney's California Adventure. Christine (his x-fiancée) allowed him to bring his son Alex, who is about three-years old here. Some of the points that hurt the verisimilitude of the story are: there are very few rides for small children at the California Adventure, and Disneyland would have been a better choice; he is taken on a 40 minute drive to Los Angeles in rush hour traffic - that trip, though no further than 40 miles, during rush hour would take closer to 80 and sometimes 120 minutes; and lastly the 405 freeway was referred to as the San Diego freeway - it doesn't go to San Diego -- it is a junction freeway between two sections of the 5. Since Alex headed north it would be referred to as the Santa Monica Freeway. However, these little nits that show a lack of research do not detract from the mystery. Several story lines are intertwined with the gory murder. One is a romantic encounter with his current flame Jamilla, who flew down from San Francisco for an afternoon tryst with her lover. Next is a serious and ugly custody hearing about the fate of Little Alex. The Mary Smith vignettes, which show she could not possibly be a killer, and the murders themselves. Alex Cross is up to the challenges and this is one of the better books in the series. Patterson lost the strong character connection in London Bridges, Four Blind Mice, and The Big Bad Wolf, but hits the target here. What I love about the Alex Cross novels, and I have read almost all of them, is the character development. Patterson is so masterful a writer in these books that I wouldn't be surprised to discover there is a family living in the DC area. The plots are strong and different in each of these books. This was a one day read. An absolute page turner filled with angst and joy. Alex Cross solves the murders with strong and creative investigative skills. A five star book.

Quite Contrary, How Does Your Alex Cross Adventure Grow?

Published by Thriftbooks.com User , 16 years ago
Well I must admit I did wonder if Patterson had another great Alex Cross adventure in him after recent efforts where he seems to have got confused between his star character being Alex Cross or James Bond. I am happy to say though that this is another excellent traditional style Cross adventure with one of the best serial killers yet, that will have readers guessing their identity until it is revealed near the end. Speaking of the ending though I thought it was a little but unrealistically convenient so Alex could be around for the next sequel. That's all I'll say on that though so as not to give it away to anyone who actually reads these reviews before making a decision to purchase books. Overall I was very pleased with Mary, Mary and recommend it to any fan of quality Alex Cross adventures. I also recommend Patterson's previous novel (not an Alex Cross Adventure) Lifeguard which shows he can still write great stand alone novels as well, again some in this line have been rather average of late. Anyway its great to see Patterson back and hopefully he has learnt from the extensive criticism he got from his mediocre novels and will continue to put the time into producing the great work that we know he can and we all want to read.

Hooray! Patterson is back in form with another great Alex Cross thriller!

Published by Thriftbooks.com User , 16 years ago
Through a friend in the industry I was able to get an advance copy of Mary, Mary. To be truthful I had given up on Patterson (even though I have met the man and find him to be a great interview). His five books a year written in collaboration (actually written by others with him stamping his name on them!) Just never did it for me, and his last Cross novel "London Bridges" was way off the mark. Anyway this book is Classic Patterson, think "Kiss the Girls" in La La land. A crisp, fast moving thriller with awesome twists and turns that keep you turning pages right up to the surprise ending! "Mary, Mary" is a perfect gift for your favorite thriller lover this Xmas!
Trustpilot
Copyright © 2022 Thriftbooks.com Terms of Use | Privacy Policy | Do Not Sell or Share My Personal Information | Accessibility Statement
ThriftBooks® and the ThriftBooks® logo are registered trademarks of Thrift Books Global, LLC