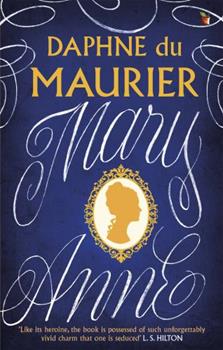 This description may be from another edition of this product. The highly anticipated reissue of the du Maurier classics American fans have been waiting for "Daphne du Maurier has no equal." Sunday Telegraph " Likely to rank as the author's best book." Saturday...

Published by Thriftbooks.com User , 11 years ago
I'm a bit conflicted about this book, I liked it and I'm glad I read it, but at the same time it really bothered me, it was depressing and I found myself alternating between being really proud of Mary Anne for being so strong and smart and being angry with her for being so foolish. Mary Anne Clarke was Daphne Du Maurier's great-great grandmother. She was clever, witty and beautiful. She was a mistress to Frederick Augustus Brunswick the Duke of York and Albany, son of King George III. She was also the star witness for the opposition when the House of Commons launched an investigation into allegations that the Duke had been accepting payments in exchange for military commissions. Mary Anne had an interesting life to say the least. The history in the story is sometimes difficult to follow, but at the same time it's not imperative that you know all the political details. I recently read 'The Secret Wife of King George IV' by Diane Haeger and was really glad I had some understanding of the references to the Prince of Wales and Mrs. Fritz, his wife and mistress. Du Maurier writes about Mary Anne's relationships with a subtlety that can escape the reader if they aren't paying close attention. Mary Anne had guts to stand up to the government's cross-examination and the public scrutiny during the investigation, I admired her bravery. I thought it was fascinating that memorabilia was being produced and sold with Mary Anne's likeness during the scandal. So many things were as they are now. I am a fan of Daphne Du Maurier, I just love her writing and I'm also very curious about her family history. There's a lot of really fascinating stuff in the Du Maurier family tree. I wanted to read this book and get an idea about the Du Maurier family past. It took some courage to write this story the way that Du Maurier did. I'm sure I would have taken the sugar coated path if I had been writing about my great-great grandmother. Du Maurier describes the facade Mary Anne created to give people the impression she was living a luxurious and carefree life, the reader has to wonder if the same is true for the author. Was she living a life with a facade that was very different from reality, the more I read about her the more I think so.

Published by Thriftbooks.com User , 11 years ago
I became interested in this book after reading du Maurier's earlier works, "Rebecca" and "My Cousin Rachel". This book differs in the sense that there is not the whole murder mystery aura overriding the story. However, it is just as riveting because of du Maurier's excellent affinity for creating compelling yet restrictive dialogue between characters. The entire book seems to be a well-played game between two societal camps at war with each other, and this is reflected even at the level of polite banter among the characters. The fact that this fiction is based on a very real relative of du Maurier's makes the story even more attractive. This book provides numerous hedonistic pleasures from its veiled references to sex to its focus on scandal and exploitative trends in society. To be more explicit, if you like to pick up the occasional tabloid in the grocery store for some unknown reason, you will feel a very rich reward along those lines when reading "Mary Anne". Though fiction, it's stunningly exact in details and makes one wonder about du Maurier's own personal experiences w/the aristrocratic society of early 20th Century England.

Published by Thriftbooks.com User , 12 years ago
A bit different from your usual Du Maurier novel, in this one she tells the story of her great-great-grandmother Mary Anne Clarke. Borne into a poor London family, Mary Anne marries Joseph Clarke who ends up drinking and gambling away any money he gets from his family. Disgusted with the marriage and desperate to support her children, Mary Anne finds herself tempted by a *cough* broker for the wealthy nobility and becomes mistress to Frederick Duke of York. Although being a mistress of a prince with no head for money brings on its own dilemma - how to run a household and a lavish lifestyle on the meager allowance the Duke gives her. With a war looming, men eager for commissions seek preferable treatment through Mary Anne, as the Duke is also the Commander-in-Chief and an offer of money gets a word in the right ear. Eventually the Duke tires of Mary Anne and she finds herself out in the cold with massive household debts and no pension from the Duke, her brother unjustly cashiered out of the army and her finger is very much in the pie when the scandal of selling commissions hits Parliament with a full blown investigation including the testimony of one very disgruntled ex-mistress. I won't be a spoiler, but further actions taken by Mary Anne in revenge against those who "done her wrong" don't work out as planned and sets her on a nine-month path of harrowing consequences. Du Maurier is superb as always, she had me hooked from the very unusual opening reflecting back on Mary Anne's life (do go back and reread it after you've finished) to the very end as she makes a very final and fitting farewell to the man who had such an impact on her life. The kind of woman you either love or hate, Mary Anne was most definitely a woman who did what she had to do in order to survive in a man's world and make a better life for her children. Du Maurier doesn't sugar coat her image either - she's presented as is, warts and all. I loved the relationship between her and the Duke, particularly their first meeting in the *cough* broker's parlor where not knowing who she's set to meet she natters on about the latest court gossip (priceless!), to their first dinner and the popping buttons (you'll know when you get there) although tops was the way the author worked in Mary Anne getting those officer's names out there in between seducing the Duke. Its so refreshing to see that an author can write a sex scene so subtly that it isn't staring you in the face with blow-by-blow details but you know what's going on at the same time. The only parts that did drag were the court scenes, with endless pages of testimony and dialogue, and for that I'm knocking off 1/2 star - 4.5/5 stars.

Excellent window onto the Regency

Published by Thriftbooks.com User , 13 years ago
Mary Anne gives a wonderfully detailed look at England in the tumultuous years right before the Regency. This was the exciting time of Nelson, Napoleon and Jane Austen. As an armchair historian, I enjoy a well-crafted story that allows me to see the decadence available during this time. And it helps that Du Maurier is writing about her own ancestor, and being rather honest as to Mary Anne's ethical and moral failings to boot. But as with all such true stories, there is no happy ending. Still, it is well worth your time and effort if you enjoy history.

This is her dream

Published by Thriftbooks.com User , 16 years ago
Opened in a flashback style, beautiful and tempting, the biography of Mary Anne Clarke, the notorious heroine, unfolded. Based on her great-great-grandmother, Ms. Du Maurier weaved a story of a woman's power struggle and web of intrique played in society dominated by men. Set in London at the time when Paris was being ruled in Terror regime, London was in parliamentary turmoil and both countries are in war at the end of 18th century. Mary Anne, with her cunning wit and unbeatable Irish blood, was born in London slum neighbourhood. With her resourceful mind, she determined to be a success in men's world by playing the same game, with the same rules. She first tried to find a wealthy husband but got a big-mouthed, good-for-nothing one instead. Not to be beaten by circumstances, she left her husband and started to use her unique beauty to make connection, to be a 'social climber', in order to provide food and shelter for her 3 children, a mother, a half-sister and a brother. As time would have it, she was introduced to The Duke of York, became his mistress and the scandalous dealings began. Being a mistress to a prince didn't mean she would have unlimited income. On the contrary, to maintain the house, lifestyle and servants, she must do 'side job' by promoting soldiers to the Duke with some amount of fee. This would lead to the most scandalous trial(s) in England concerning royal family. The dialogs and the statements were beautifully written (but no ramblings) while the characters each had their own strength and weakness. It was said that there are some resemblances between the author's life with the main character which added to the substance of the story. All I can say is I admire her wit and I see the reasons behind her every move. Feel the spirit, see the dreams and understand the love of life which came from a woman named Mary Anne.
Copyright © 2020 Thriftbooks.com Terms of Use | Privacy Policy | Do Not Sell My Personal Information | Accessibility Statement
ThriftBooks® and the ThriftBooks® logo are registered trademarks of Thrift Books Global, LLC