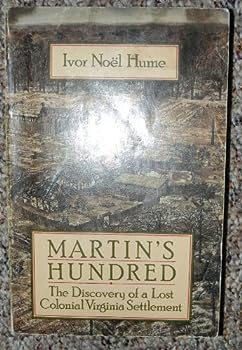 Martin's Hundred : the discovery of a lost colonial Virginia settlement

The author describes his archeological excavation of a seventeenth-century English settlement in Virginia and his discovery of evidence of the early colonial way of life. This description may be from another edition of this product.

Published by Thriftbooks.com User , 16 years ago
It is rare that an academic book, no matter what the subject, will both inform as well as entertain. This book does both in spades. It details the four-year excavation project (much of it supported by the National Geographic Society) of part of the Carter's Grove plantation, near Jamestown, Virginia, in the hopes of finding evidence of earlier inhabitation and clues to the 1622 Indian "massacre" that occured there. Before it was all over, a fort, a lost town (Wolstenholme Towne), and the skeletal remains of at least three victims of the Indian attack were unearthed. Hume tells of the archealogical excavation in great detail, yet avaoids the ho-hum pitfalls such detailed scientific explanations might produce by utilizing a very approachable style, filled with humor and good cheer, especially when the weather got bad. Even archeologists are human after all, and false leads, wild goose chases, and seemingly endless unanswerable questions plague them as much as the rest of us; Hume's dealing with that in very human terms we all can appreciate makes this book a welcomed exception to the general rule. An excellent book. One small quibble: in discussing the wooden palisade that surrounded the fort, Hume refers to a "Fort Laramie-style wall of pointed tree trunks." It's true that many American forts in the West had that kind of protective wall around them, but Fort Laramie never did; it had no wall around it at all.

An outstanding book for the non-archaeologist

Published by Thriftbooks.com User , 19 years ago
I purchased this book on a visit to Williamsburg and it sat on my shelf for quite a while before I seriously dove in. This book combines a clear explaination of archaeological methods with the building suspense of a good detective novel. As The author and his team uncover the existence of an early Virginia colony and utilize an astounding range of techniques and research to slowly piece together the lives of the inhabitants you will be drawn into the past. More than that you will be excited to read on and discover with these archaeologists what really happened. I.N. Hume writes eloquently on all aspects of organizing and proceeding with a project of this scale and mixes those details regarding administration and method with the fascinating story of the settlement of Martin's Hundred flawlessly. I could not imagine a better introduction to the discipline of archaeology for the layperson.

Published by Thriftbooks.com User , 21 years ago
While you might think that a book about historic archaeology would be dry and boring (and many are!), Ivor Noel Hume's story of the archaeological dig, the background research, and the people of the 17th century who lived at Martin's Hundred is fascinating. This is probably the only archaeology book that you won't be able to put down because you will want to find out what happened next. If only I could write as well!

Life and Death in a Virginia Colony

Published by Thriftbooks.com User , 24 years ago
I first read Martin's Hundred when I was in the hospital waiting to give birth to my first child. I managed to stay interested between my labor pains, and that says a lot about Mr. Hulme's writing! I've re-read it four times since. The archaeological details and interpretations are utterly fascinating, especially those of the pointed-roof coffins and poor "Granny's hairdo." The colonists who inhabited the Carter's Grove site really came alive for me. This is an all- time favorite book of mine.

Published by Thriftbooks.com User , 25 years ago
Just a little ways upstream on the James River from Colonial Williamsburg and Jamestown, is Carter's Grove, a recreation of a Virginia plantation. But on this beautiful spot is not only that plantation and all its history, but a settlement hundreds of years older, predating much that has been recreated elsewhere. This book leads you through the discovery of Wolstenhome step by step, and as each new artifact is discovered, the story of this forgotten town unfolds in vivid detail. No dry academic, Hume is so excited by his subject that you can't help but be carried along as well. Why did the coffins have nail down the center of the roof? What is the meaning of the bones scattered around the site, was it a hurried burial because of sickness, or a massacre?! After you read this mesmerizing book, visit the site. It's well worth a visit
Trustpilot
Copyright © 2022 Thriftbooks.com Terms of Use | Privacy Policy | Do Not Sell My Personal Information | Accessibility Statement
ThriftBooks® and the ThriftBooks® logo are registered trademarks of Thrift Books Global, LLC