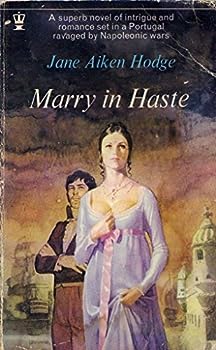 This description may be from another edition of this product. Book by Hodge, Jane Aiken

Published by Thriftbooks.com User , 12 years ago
This is a book set in the middle ages. I guess it would be considered a historical romance. Not sure if there is any real substance in the events that occurred so much as it is set in the time period and "could" have happened. It is a quick read and has a couple of twists at the end. This book has the capability of evoking emotion while reading. You may find yourself getting angry with some characters and frustrated with others. Very enjoyable and actually has a good plot.

Published by Thriftbooks.com User , 18 years ago
Camilla was far too young and lovely to be a governess, but she was quite alone in the world except for a disreputable father, and was desperate for funds. Her first job was going well enough until her employer's young male relative came for a visit. He had the nerve to attack Camilla in the garden...an indiscretion for which Camilla was shown the door. And that is how Camilla's adventure began...all alone in the middle of nowhere waiting for a dreadfully late public stage with no job and little money, Camilla chances to meet an extraordinary stranger with an equally extraordinary proposal... a marriage of conveniece. It seems that he will be disinherited by his grandmother if he does not marry immmediately. And since he is desperate and Camilla has no where else to turn, she agrees against her better judgement.Camilla soon begins to believe that she may actually live happily ever after...until she falls in love with her handsome husband and complicates everything. But worse by far is the shocking revelation that Camilla may not know the truth about her husband at all...could he really be...a spy?Wicked good gothic romance. I have read it multiple times. A must for any Jane Aiken Hodge fan.
Copyright © 2020 Thriftbooks.com Terms of Use | Privacy Policy | Do Not Sell My Personal Information | Accessibility Statement
ThriftBooks® and the ThriftBooks® logo are registered trademarks of Thrift Books Global, LLC