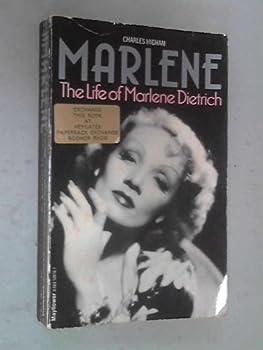 This description may be from another edition of this product. Marlene Dietrich is one of the great liberated women of the twentieth century, a superstar of stage and screen who has lived by her own rules, chosen her own men, and dared to present a bisexual image...

The true meaning of 'star'

Published by Thriftbooks.com User , 17 years ago
I have started to build up a small collection of film star biographies and memoirs, so when I saw this I seized upon the opportunity to read about one of the more glamorous and beautiful silver-screen stars. And star is really the right word for Marlene Dietrich, as I discovered. The picture Higham paints of her early theatre and film outings, her move to Hollywood, and he live post-World War 2 reads like the plot of a movie. Although there seems to be no official sanction of this book from the lady herself, Higham still manages to make the reader fell as if Marlene is right there, evoking vividly many scenes from movies, her time at the front, and after. The only problem I found with the book was that...it's not written by Marlene Dietrich. I have read Lauren Bacall's and Esther Williams' autobiographies, and the feeling of real understanding I got from those books was a little lacking in this book. This is primarily due to the fact that Higham frequently has to insert things like 'This surely led Marlene to think...' etc., which reminds the reader sharply that the author was not there, did not experience these things, and is writing from a distance. I was also curious, after seeing many pictures in other books, about the definite change Marlene's physical appearance underwent post-Der Blaue Engel (The Blue Angel), and the reasons for this. But it is passed over mysteriously by Higham.The writing in this book is generally quite wonderful, but occasionally lapses into tiresome listing: Marlene met so-and-so, and became friends because of this. At this time, she also met so-and-so, and they did this and this and this...this is in contrast to the passages describing pre-World War 2 Berlin and post-war Paris, which ring with a poetic quality which gave me a nice surprise.Overall, though, an interesting introduction, but it does leave one wanting more...more photos in particular! But Higham's portrayal of Marlene inspired me, and I have now found another film star who is not only fascinating but admirable as well.
Copyright © 2020 Thriftbooks.com Terms of Use | Privacy Policy | Do Not Sell My Personal Information | Accessibility Statement
ThriftBooks® and the ThriftBooks® logo are registered trademarks of Thrift Books Global, LLC