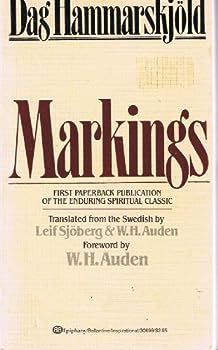 Dag Hammarskjold left behind the manuscript of this book to be published after his death. It is a remarkable record of the spiritual life of a man whose public image was universally known and admired -- a record that reveals the extent of his commitment to the Way of the Cross. Hammarskjold himself described the manuscript as a "sort of white book concerning my negotiations with myself and with God." The first entry is a poem written about 1925; the...

A Journey into the Soul

Published by Thriftbooks.com User , 19 years ago
I like this book. It captures the innermost struggles and thoughts of a man who achieved greatness in many senses. Dag Hammarskjold's musings illuminate that even people of worldly importance wrestle with the same internal conflicts that the rest of mankind does, when we take the time to reflect. That a man as busy as the U.N. Secretary General took the time to engage in such introspection speaks highly of his humility and character. Markings has given me inspiration to continue exploring my own innermost struggles through journaling and taking counsel with my conscience on long runs. If we could all emulate Hammarskjold's ability to capture the essence of a moment, feeling or internal conflict, we would probably be more at peace with the world and ourselves. Highly recommended for any wishing to peer into the thoughts of a philosophical leader.

The profound thoughts of a profound man

Published by Thriftbooks.com User , 20 years ago
Upon his tragic death in September 1961, Hammarskjöld left his diary in the care of a friend, saying only that if the friend thought there was material therein worth publishing, then he was entitled to do so. In the starkest of terms, this book represents a man's search for meaning, faith, virtue, and the Way. He does not engage in fatuous comfort, nor is any illusion created that life is intended to be simple. He does not indulge in the (far too common, to my mind) practice of lamenting his own humanity. Instead, in both the tradition of the Stoicists and Kierkegaard, he embraces it, and looks for the faith and the courage to utilise his capacities to their fullest extent.This is also a work of universal relevance: there is truly much in here worth sharing. This is the one book that stays by my bed. The faith, simplicity, care and stoicism are deeply touching. This I find to be a wonderful book...largely for helping us to reconcile the world as it is, with the world as it needs to be, for reminding us to take joy in our burdens, and not to lament our transitory nature. As near as I have ever found, Hammarskjöld's thoughts encapsulate what I believe it is to be human.

My absolute favorite book of all time

Published by Thriftbooks.com User , 21 years ago
Over the years, in this collection of personal reflections and meditations, I have slowly learned, as Hammarskjold did, "the explanation of how man should live a life of active social service in full harmony with himself as a member of the community of the spirit." Hammarskjold found his answer "in the writings of those great medieval mystics for whom 'self-surrender' had been the way to self-realization, and who in 'singleness of mind' and 'inwardness' had found strength to say Yes to every demand which the needs of their neighbors made them face, and to say Yes also to every fate life had in store for them ... Love--that much misused and misinterpreted word--for them meant simply an overflowing of the strength with which they felt themselves filled when living in true self-oblivion. And this love found natural expression in an unhesitant fulfillment of duty and an unreserved acceptance of life, whatever it brought them personally of toil, suffering--or happiness."This is my favorite quote from the entire book, one to which I have returned many times over the years, but there are many more treasures to be found in this collection. W.H. Auden's foreword I found deeply insightful, and I have returned to it as well many times over the years. How to reconcile our twentieth-century life with what is truly asked of us, when we care to face those questions, is an overarching concern throughout this book. Time and again, Hammarskjold challenges himself, and by sharing in his spiritual struggles, we challenge ourselves as well by meditating on his reflections. His writing is deeply inspiring and sobering, and I feel a sense of grateful humility at the end of each rereading of it. This is a book to keep by your bedside, to turn to when you are in despair and need some soul-strengthening.

Published by Thriftbooks.com User , 21 years ago
Hammarskjold was a Swedish diplomat who served as secretary-general of the United Nations at the height of the Cold War (and whose death in a plane crash in Africa in 1961 may not have been an accident). Throughout his life he struggled with balancing the tension between the active life and the contemplative life that always faces the political intellectual. This book is his private journal, in which he struggles with a deeply personal and private faith in the context of a vocation that called him to one of the most visible and influential offices in international politics. That struggle, which emerges in bits and pieces in entries that span nearly four decades, both celebrates life and indulges deep feelings of doubt and isolation."Markings" is far more a work of philosophy than autobiography. Hammarskjold's frend W.H. Auden contributes a moving foreword that supplies a context for Hammarskjold's writing. But as the foreword notes, Hammarskjold does not "make a single direct reference to his career as an international civil servant, to the persons he met, or the historical events of his time in which he played an important role."

A man for others

Published by Thriftbooks.com User , 21 years ago
Although a man of worldly success, Dag Hammarskjold gives to us in his own words, his in-depth search for the meaning of life. Upon his death in 1961, his request is to have his diary published if it proves to others to be worthy of publishing. This diary is rich with the struggle to live his life without the benefit of thanksgiving from his peers. His deep conviction, which comes after much search and struggle, is to lay down his life for others, no matter the consequence, the praise, the outcome. To live each day by giving up the self and rising above to meet the other on his/her journey. Although Dag Hammarskjold did indeed receive much praise and gratitude as Secretary General for the United Nations, he realized deep down that this was not the true focus of his life but to give without the idea of getting anything in return, this is the real self rising, the spirit of God. Many have given to us "this road less traveled" by their exemplary life: Jesus, Buddha, Gandhi, Francis of Assisi, Meister Eckhart, who is quoted in the introduction to Markings: " Only the hand which erases can write the true thing", Simone Weil, Mother Teresa, Dalai Lama and many other's whose lives are lived in this way but with no recognition. It is a humble way to live with sometimes having to turn the other cheek but the letting go of the ego and the releasing of God's spirit is a gift worthy of the sacrifice.
Copyright © 2022 Thriftbooks.com Terms of Use | Privacy Policy | Do Not Sell My Personal Information | Accessibility Statement
ThriftBooks® and the ThriftBooks® logo are registered trademarks of Thrift Books Global, LLC