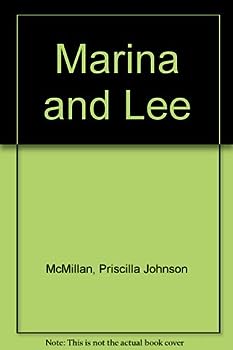 The inside story of Lee Harvey Oswald's path to killing John. F. Kennedy. Reissued to mark the 50th anniversary of the Kennedy assassination, Marina and Lee is an indispensable account of one of... This description may be from another edition of this product.

Published by Thriftbooks.com User , 17 years ago
"Marina and Lee", by Priscilla Johnson McMillan, is without a doubt the the best book available on the mind and personality of Lee Harvey Oswald, assassin of President John Kennedy. McMillian's excellent book sheds considerable light on who Lee Oswald was, how he developed into the man he became, how he thought, how he acted, what drove his actions, how he interacted with his wife and others, his ambitions, and ultimately, his final days before he entered the Texas Schoolbook Depository on November 22, 1963. Although McMillian focuses her attention on both Marina and Lee Oswald, (the book is essentially the recollections of Marina Oswald) the reader's attention is of course focused on learning what Lee Oswald was like as a person, and what forces drove him to act as he did. The reader obtains a very sympathetic viewpoint of Marina, which is natural considering the narrative is from Marina's point-of-view. However, the book strives for day-to-day historical accuracy, and the personalities of both Marina and Lee are presented warts and all. I believe it to be an accurate portrayal of both persons. McMillian, an American writer living in the Soviet Union, interviewed Lee Oswald in the USSR, when he defected there in 1959. She also extensively interviewed Oswald's wife Marina after the assassination. From these in-depth interviews, she is able to piece together the intensely and tragically flawed personality of Lee Oswald, and she ultimately builds to the conclusion that Oswald killed Kennedy on 11-22-63. Folks, this is a MUST-READ if you have interest in the Kennedy assassination, for it is the only book of its kind that lends intricate insight into the mind of Lee Oswald, helping the reader to understand the depravity of conscious that Oswald possessed. You will be amazed at the depth of insights McMillian provides the reader in regards to Oswald! After reading this book, one can come to understand that Oswald was most capable of politically-movitated killing, and must be the prime candidate for the assassination of President Kennedy. The book will grab you in the first chapter and hold your interest to the last chapter. I guarantee that after reading it, you will begin to understand how Oswald was capable of shooting President Kennedy, and how his intense drive to "be someone" led to his ultimate act. Get this book! Jim "Konedog" Koenig

This good book needs to be re-issued.

Published by Thriftbooks.com User , 22 years ago
Shortly after the assassination of President John Kennedy, Priscilla McMillan contacted Oswald's widow, Marina, and spent considerable time with her. McMillan had interviewed Lee Oswald when he defected to Russia and had the added advantage of knowledge of Russia and Russians. She used this to persuade Marina to give an account of her life with Oswald. To this day, 2000, nobody has given a better account of Marina's view of their relationship. It is very worthwhile reading.
Trustpilot
Copyright © 2022 Thriftbooks.com Terms of Use | Privacy Policy | Do Not Sell or Share My Personal Information | Accessibility Statement
ThriftBooks® and the ThriftBooks® logo are registered trademarks of Thrift Books Global, LLC