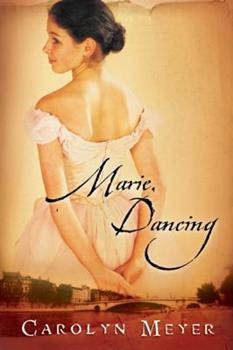 Marie van Goethem, a fourteen-year-old ballet dancer in the famed Paris Op ra, has led a life of hardship and poverty. For her, dancing is the only joy to counter the pain inflicted by hunger, her mother's drinking, and her selfish older sister. But when famed artist Edgar Degas demands Marie's presence in his studio, it appears that her life will be transformed: He will pay her to pose for a new sculpture, and he promises to make her a star. As Marie...

...makes the reader feel as if they are flying through the air, alongside Marie, performing flawless

Published by Thriftbooks.com User , 15 years ago
The year is 1878. Fourteen-year-old Marie van Goethem has dreamed of nothing but becoming a sujet in the Paris Opera since she first joined the company years ago. And now, at the age of 14-years-old, Marie feels that she has the potential to do just that. However, just as she is basking in the glow of feeling light on her feet, she is picked out of her class by none other than prized Parisian painter, Edward Degas. Degas is a regular fixture in Marie's dance classes. Always sketching the dancers in various positions, from pointe to simply lacing their slippers, or adjusting their tutus. But Degas has other plans for Marie. For, as soon as she accompanies him to his studio, she learns that Degas plans on using Marie as the model for his one, and only, sculpture, entitled Petite danseuse de quatorze ans (Little Dancer Aged Fourteen). Marie is only too happy to comply with Monsieur Degas's wishes, for her family has struck poverty since her father passed away, and she could use the money to provide food for her younger sister, Charlotte. Money that her mother drinks away, and her older sister, Antoinette, spends on frivolous items, such as fancy stockings. However, as the years pass, and Marie is no longer summoned by Monsieur Degas, she realizes that she needs to find another way to make some extra money, in an attempt to follow her deceased father's wishes, and provide for her beloved family. And, at both her mother's, and Antoinette's request (and demands), Marie begins following the same path Antoinette has paved for her, attending the foyer de la danse. But when Marie's conscience rebels against what is expected of her at foyer de la danse, and Antoinette stumbles into a bout of trouble, Marie decides to change her path in life, in an attempt to create the home she always wanted for her younger sister; and hold her oft-times troubled family together. I did a report about Degas's Little Dancer Aged Fourteen earlier this year for an art class. Therefore, when I came across it at Barnes & Noble, and received a recommendation from Carolyn Meyer herself regarding MARIE, DANCING, I couldn't pass it up. As someone who has adored ballet since the time I could walk, I found MARIE, DANCING to be an original, awe-inspiring addition to the historical fiction world. One that would intrigue even those who don't hold an interest in ballet. While MARIE, DANCING gives random facts about the illustrious sculpture created by Degas, it surrounds itself more around Marie's troubled, poverty-stricken life, and the struggles she must endure in an attempt to keep both her own head, and that of her siblings and mother, above water. Through Marie's eyes, readers are taken on a journey through five-years of Marie's life. From her time dancing at the Paris Opera, to her modeling job with Degas', and the unveiling of Little Dancer Aged Fourteen, all the way through her troubles with her family, and Antoinette's rebellion. MARIE, DANCING brings about the not-so-glitzy Pa

Published by Thriftbooks.com User , 15 years ago
I can't count the times that I've seen a truly inspiring painting or sculpture and wondered what the inspiration behind it was. With MARIE, DANCING, the story behind Edgar Degas's well known sculpture, Little Dancer Aged Fourteen, is brought to vivid life in this fictionalized account. At fourteen, Marie van Goethem still holds out hope that one day her life will be, if not grand, then better than it is now. Her drunken mother is unable to hold down a job, and the place where they're forced to live can only be described as squalor. Marie knows their family--made up of Mother, Tante Helene, older sister Antoinette, and younger sister Charlotte--are poor and destitute. The only thing that brings joy to Marie's life is dancing in the Paris Opera. Ballet is her life, along with the life of both of her sisters, enrolled under the tutelage of Madame Theodore at the ballet school. Things soon change, though, for Marie and her entire family. Antoinette is being wooed by much older, and much wealthier men, and although she promises to send them money when she's set up as a mistress by her benefactor, she never does. But when Marie meets Edgar Degas and he asks her to pose for him, Marie prays that her life is about to change forever. And change it does, but not in the ways she had suspected. Mother is still drinking, Charlotte is the only girl of the three who shows real promise as a dancer who can make it her career, and her love interest, Jean-Pierre, has asked her to wait for him while he makes a name and a home for the two of them. It's only within the safety and glory of Degas's studio, or while on the stage of the Opera that Marie feels secure that her life will improve--until the day she's dismissed from the School, Antoinette asks her to play nursemaid to her unborn child, and Jean-Pierre asks her to move away from Paris, the only home she's ever known. Carolyn Meyer has brought the world of Paris, art, and dance to vivid life in MARIE, DANCING. This is a story of a girl who only wants a better life, some small pleasure within this dreary existence. And although posing for Degas doesn't change Marie's life in the way she had planned, it definitely does change it more than she could have ever dared hope or imagine.

Published by Thriftbooks.com User , 16 years ago
I picked this book off of the shelf the moment I saw the little dancer on the back cover. It is my favorite statue and so I bought it and read it in a day! It was very good,and I recommended it to my cousin. It is sutable for young adults but adults can enjoy it too! It is one of the cutest stories I have read in a long time.

Published by Thriftbooks.com User , 16 years ago
Marie, Dancing by Carolyn Meyer will appeal to ages 12 and older with a moving story of a teen who dances in the Paris Opera - her only joy in life. At home she faces an alcoholic mother and older sister's selfishness - but when Degas demands her presence in his studio, his influence may further change her love - for Marie wishes a life without poverty, and with the romance she needs. Can Degas bring all this to her world? Any who have seen Degas' portrait will find Meyer's extrapolation of the young dancer's life is compelling.

Published by Thriftbooks.com User , 16 years ago
I read this book on a recommendation from a local bookstore. I reminded me in premise of "A Girl with a Pearl Earring" which I enjoyed immensly. I found the book very enjoyable and most likely very telling of what life was like for girls that were members of the Paris Opera ballet. The age on the book says 12 and up; this website indicates grades 6-8. Maybe I am getting old, but I think that the description of what some of the girls resorted to for money may be a little to much for the younger girls. The book is a very clean book as far as describing anything (there is only kissing in the book.) Girls may be a little more worldly than I was, actually I am sure they are, However, I suggest reading this book before giving it to a 6th and maybe even a 7th grader. Just one gal's opinion. Don't worry, you will enjoy the read!
Trustpilot
Copyright © 2022 Thriftbooks.com Terms of Use | Privacy Policy | Do Not Sell My Personal Information | Accessibility Statement
ThriftBooks® and the ThriftBooks® logo are registered trademarks of Thrift Books Global, LLC