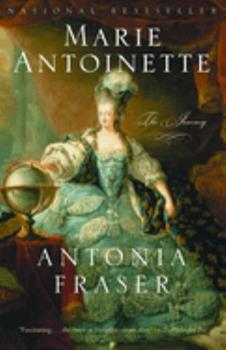 This description may be from another edition of this product. France's beleaguered queen, Marie Antoinette, wrongly accused of uttering the infamous "Let them eat cake," was the subject of ridicule and curiosity even before her death; she has since been the...

This book made me love biographies!! Antonia Fraser is the way to go

Published by Stacey Gage , 2 months ago
It was a great read, I would highly recommend. Marie is quite a character and so much fun to learn about, Antonia does a wonderful job. I just ordered her book on Henry 8’s wives, so excited.

Published by Thriftbooks.com User , 14 years ago
Don't be afraid of this big-boned bio of Marie Antoinette, it has everything you need. It's elegantly paced and beautifully construed. Fraser's work is just the best. She knows when to leave a topic, when to move on. HOW to move on. This is first rate writing from a consistently fine writer. The book is sypathetic toward Marie Antoinette, on occasion even moving; Fraser illuminates from the inside out with her subjects, and we're the winners for that. The book's full of marvelous detail about court life, yet seen through new eyes, perhaps Marie Antoinette's eyes. Fraser lingers on the Queen's Austrian life before Versailles long enough to lead us to new lights about this woman's suffering on account of her extraordinary temperment. It's an altogether admirable effort. If the book seems light on Fersen, look again. His place in Marie Antoinette's life undulates through the narrative like a slow fire. This is one of the few authoritative books about Marie Antoinette that truly witnesses the mystery. Pre-Revolutionary France bleeds through the pages. Fraser writes like an entranced surgeon; her preparation, her immaculate discernment of good sources is unmatched. An essential book about astonishing things.

Published by Thriftbooks.com User , 18 years ago
With "Marie Antoinette", Lady Antonia Fraser has written one of the more memorable biographies of recent years. She has taken a woman who had been turned into a caricature, a "poster-child" for a "typical" example of reactionary, frivolous royalty, and turned her into a real, and sympathetic, human being. And, if Lady Antonia has perhaps stacked the deck a bit too much in favor of her subject- playing up her positive qualities and playing down her negative ones- by the time you reach the end of the book your gut feeling is that you really can't blame her. For this was a woman who, before she was physically destroyed by the forces of revolution, had been emotionally worn down by years of abuse at the hands of her political enemies. This was a woman who had very high moral standards, yet was constantly being accused in the pamphlets of the time of being heterosexually and homosexually promiscuous; a generous, sensitive and intelligent woman accused of being selfish, heartless and stupid; a woman who wasn't a political animal- who wanted to do "good works" and to be a good wife and mother- but was subjected to pressure right after her marriage (by her mother Maria Teresa) to do what was best for Austria rather than what was best for France. Even if Antoinette had been politically inclined, her influence was never very great- Louis XVI, despite what the pamphlets said about him, was far from being a fool. His main interest may have been hunting, but he was intelligent, well-read, and he had a mind of his own. (And he had been warned in his youth to be wary of wily Austrian women!) But after years of anti-Antoinette and "fool Louis" propaganda, the people were primed to mistrust and hate "The Austrian Woman". As the saying goes, if you say something loudly enough and often enough people will start to believe it. When conditions in France got bad enough, the people knew who to blame. Louis and Antoinette could easily have been exiled. But the intellectuals in charge of the revolution had the precedent of the execution of Charles I of England. And, as intellectuals sometimes do, they gave more weight to abstract ideas and ideals than to acting in a humane manner. (They thought that Antoinette's death would "unite them in blood"- whatever that was supposed to mean.) In an eerie precursor to the Stalinist show trials of the 20th century, Marie was put on trial. The outcome was decided ahead of time, and so was never in doubt. She was not allowed to prepare a proper defense. Unsubstantiated accusations were made and hearsay was accepted as evidence. Just to be sure, the 8 year old Dauphin, one of whose testicles had been damaged while playing, was brainwashed by his jailers into making allegations of sexual abuse against his own mother. The allegations weren't true but, due to the corrosive influence of the pamphleteers over the course of many years, the people were ready to believe anything. Despite being ill and suffering from sleep deprivation, Antoinet

Published by Thriftbooks.com User , 19 years ago
This is only the second book that I've read by Antonia Fraser, the other one being her last, Faith and Treason. Although I enjoyed that book well enough (for Fraser is a very capable writer, able to both capture and hold the reader's attention), I was more than a little uncomfortable with the obvious bias that shone through an otherwise excellent treatment of England's Gunpowder Plot. I was hesitant, therefore, about purchasing this one; but as it turned out, I thoroughly enjoyed this 488-page hardcover (with 429 pages of actual text). I found it to be enthralling, captivating, eye-opening, informative, and insightful, making it a joy to read and a book that I could not wait to get back to. Additionally, it is amply illustrated (48 pages, mostly colour), and I found Fraser's treatment to be fairly thorough (though perhaps not quite so thorough as I've come to expect with Alison Weir's books). Most importantly, I came away from the book with not only a greater knowledge and understanding of (not to mention sympathy for) one of the most famous women in history, but a much deeper understanding of the French Revolution and of the various factors leading up to it. Fraser does write in a manner that is sympathetic to Antoinette. I do feel authors of historical subjects ought to be as objective as possible; perhaps, though, it is as Fraser says: "[I]s [looking without passion] really possible with regard to the career and character of Marie Antoinette?" (p. 422). This was a woman who, in her lifetime, was either greatly admired or vehemently loathed (sentiments which don't seem to have softened much with the passage of time). More significantly, however, this was a woman who was clearly maligned. Like the rest of us, she had her faults (which are certainly not glossed over by Fraser), but surely no one who has even an ounce of compassion (whether he or she be detractor or admirer) could think that this woman deserved the callous treatment she received and the abject humiliations to which she was subjected. Antoinette appears, in spite of her faults, to have been primarily a compassionate and kind-hearted (if not overly intelligent) woman. Nevertheless, she had the misfortune of being by accident of birth of royal blood (and Austrian blood at that) and, by the machinations of a domineering mother, queen consort to the king of France at a time when the French court was, in essence, an opulent fish bowl. As a result, Antoinette had the additional misfortune of being at the mercy of libelists intent on her destruction (at a time when there were obviously no libel laws). With reference to Louis XVI, Fraser makes a comment equally applicable to Antoinette: She was hated, not for what she did, but for who she was (ie. a foreigner and a representative of the old order). Any legitimate faults she may have had were, it would seem, merely surplus to requirement for a woman who already had more than enough black marks against her.Those who think th

Published by Thriftbooks.com User , 19 years ago
True or false? 1) Marie Antoinette was a frivolous princess who became a clever, manipulative queen 2) She ruled France through her weak husband 3) She said of the bread-less French, "Let them eat cake." 4) In her spare time, she enjoyed dressing as a milk maid and wandering around a fake farm she had built at Versailles. If you answered "true" to any of these questions, you will want to read Antonia Fraser's detailed, engrossing biography of Marie Antoinette. Fraser's work is well-documented and scholarly, but it is neither dry nor slow reading. She provides sufficient background information to put the historical events in context, but does not allow the facts to hinder the flow of the story. Her writing has an immediacy that pulls the reader so deeply into the story, it is easy to forget that we already know the ending of this historical life. (When the royal family attempts to escape their French captors, Fraser allows us to think-to hope-they might get away.) Through Fraser's eyes, we first sympathize, and then empathize with the princess who only became queen by accident. In addition, Frazer gives us a thorough education in the social order at Versailles, the complex bureaucracy (and attendant jobs) of the French court, and the political infighting that ultimately was the downfall of the entire system. This is a thoroughly engrossing biography-a keeper.

Antonia Fraser Has Done It Again

Published by Thriftbooks.com User , 20 years ago
As in the case of her history of "Mary, Queen of Scots," Antonia Fraser has taken a much mis-understood and maligned Queen and told her story with as much clarity and understanding as possible. Used by her mother, the Empress Maria Theresa of Austria, as a pawn for European politics, Marie Antoinette was thrust into the vicious and decadent French court at an early age and had to endure years of humiliation from all sides because of her seemingly inability to produce an heir to the French throne (the Daulphin's impotence and stupidity notwithstanding). Once an heir was produced, three more children followed of which two died young. Lady Fraser is very adept at balancing Marie Antoinette's faults as well as her virtues in producing a portrait of a woman forced by circumstance to go her own way through French politics - because of this, she created many loyal friends and dangerous enemies. Her long time affair with Count Fersen as well as the diamond necklace fiasco has been told with clarity which finally puts to rest the many distortions and lies which have been handed down by less astute (and bias) historians. The final chapter is heart-rending to say the least, in which one finally glimpses Marie Antoinette's final hours in which she goes to her death serenely and forgives her enemies (the blood of Mary Stuart prevails at the end). Thank you Antonia for a truly unique reading experience.
Copyright © 2020 Thriftbooks.com Terms of Use | Privacy Policy | Do Not Sell My Personal Information | Accessibility Statement
ThriftBooks® and the ThriftBooks® logo are registered trademarks of Thrift Books Global, LLC