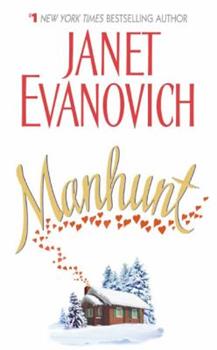 A woman with a talent for numbers, Alexandra Scott wanted to escape the rat race and go someplace where the men outnumber the women. Trading in her Wall Street job and fancy condo for a rundown cabin in the woods. She's now Alaskan Wilderness Woman. It isn't long before she finds exactly what she's looking for: one sexy pilot named Michael Casey. But this confirmed bachelor has no intentions of getting caught in any woman's crosshairs--especially...

Janet E. does it again!

Published by EarthStone , 3 years ago
This is another example of how a good author captures the audience. Being a mystery story lover, I would never tell you a thing so you can experience this book for yourself!!

Published by Thriftbooks.com User , 16 years ago
My family lives in Alaska, so I started to read with some trepidation. And then, I started laughing, until I couldn't breathe, tears rolled down my face and I slid out of my chair. A hard hearted, calculating business woman, Alex coldbloodedly sets out to Alaska (because of the favorable male:female ratio, don't you know)to find a husband. And she does - just not what she planned on. Of course, she also didn't plan to fall in the drink, or get stuck with a gunshop, or ... well, read it for yourself. Ms. Evanovich scores once more, for truth, justice and love in odd corners!

Published by Thriftbooks.com User , 16 years ago
Janet Evaonvich always seems to write such witty and fun stories. This was a hoot and I found myself laughing out loud quite a few times. I enjoyed the quirky Alex and I found her to be likeable. The romantic sparks between her and Casey lept off of the page. I look forward to reading much more of Evanovich in the future, as she has become one of my most favorite authors.

Published by Thriftbooks.com User , 16 years ago
"Manhunt" is a sexy, smart, fast read by Janet Evanovich. The book begins with Alexandra Scott also known as a work-a-holic who works 12-hour days and goes home to her pathetic nightlife of eating Oreos and drinking milk. Alex, as she's called, becomes tried of her life in New Jersey and something in her snaps. She, on the spur of the moment, trades in her fancy condo for a cabin on seven acres of land in Alaskan wilderness. Oh and one more thing she's never even seen a picture of the place. She packs up and drives to Alaska on the way there she makes a pit stop and accidentally almost breaks a man's nose. The man is macho man Michael Casey who just goes by 'Casey'. After their meeting, she can't get him out of her mind, and when she finally reaches Alaska they inevitably meet again. This time, however, she finds out he's her one and only neighbor. She discovers the cabin is a joke but the seven acres of land makes her stay. She makes due with what she has and goes back to her original plan: to find a husband. However, the likely candidate, Casey, is immediately deemed a `lost cause' and not husband material because he never plans on getting married. The two then become friends but the physical attraction between them exists and the passion between the two finally collides. But Casey realizes that the two can't be together because he never plans on tying the knot. Though, marriage is only one of the reasons. The other reason is revealed in the book and the question is answered will Casey be able to move on with his life and make Alex his wife? Or will he send Alex back to New Jersey and resist his heart? Well you'll have to read the book, which I highly recommend, to find out. In conclusion, the book is sexy, smart, and fast. It's a great read if you're one of those readers like me who reads all the "classics" and other wordy books that go over the 500-page marker. This was my first book by Janet Evanovich, and it certainly won't be my last.

Published by Thriftbooks.com User , 16 years ago
This story was terribly entertaining. I would be stopped at a stop light while listening to the story laughing out loud while people looked at me like I was nuts. The story ends pretty much as expected, but the road to that end is hysterical!

Published by Thriftbooks.com User , 17 years ago
I enjoyed this book. I felt the reading flowed and the story was full of adventure and loads of laughs.
Trustpilot
Copyright © 2022 Thriftbooks.com Terms of Use | Privacy Policy | Do Not Sell My Personal Information | Cookie Preferences | Accessibility Statement
ThriftBooks® and the ThriftBooks® logo are registered trademarks of Thrift Books Global, LLC