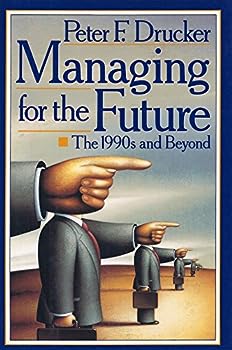 Managing for the Future: The 1990s and Beyond

At last, a phenomenal new management book by the man that Fortune magazine calls "in a class by himself". From an analysis of the end of the welfare state to the present dearth of theories on how and why the U.S. economy works, Drucker's advice is essential to anyone concerned about the future of American economy.

Published by Thriftbooks.com User , 13 years ago
1. Contrary to popular belief, many of the US multinationals are advancing rather than retrenching in Western Europe and in Japan. 2. A small car plant in Fremont, Ca is jointly owned by GM and Toyota and was designed to teach GM how to build small cars profitably. The two cars produced are the Chevrolet Nova and the Toyota Corolla FX. 3. Going transnational is not confined to manufacturing firms. Companies become transnational to gain leadership positions in the developed world. 4. In an age of sharp and violent currency fluctuations, this means a leader must be able to innovate, to produce and to market in every area of the developed world - or else be defenseless against competition should foreign-exchange rates sharply shift. 5. In the early 80s, currency fluctuations approached 50 percent due to a stronger dollar and high interest rates. The world market share of manufactured goods produced by the US based companies stayed at 20 to 22 percent, a level sustained since the 60s. Exports decreased in steel, automobiles, consumer electronics, machine tools, and semiconductors. American manufacturers with Western European ventures substantially increased their market penetration in computers and computer software, in pharmaceuticals, specialty chemicals, telecommunication equipment, and financial services. 6. No company was hit harder in the early 80s by the tide of Japanese imports into the US than Ford. What saved Ford was its leadership position in the European Market, giving profits and cash flow to pull it through the dismal years. Major US banks accounted for 50 percent of the services during this time period. 7. International trade has been steadily slowing down for the most of the past decade. But international investment is booming as never before. Most of the investments are in securities. A third is permanent investment in manufacturing and financial services. Trade is becoming dependant on investment. 8. One-fifth of the capital invested in US manufacturing firms is in facilities outside the US. About One fifth of the output of US manufacturing is offshore. Three quarters of the output is for sale abroad and one quarter is exported back to the US. Major American commercial banks and major brokerage firms have assets invested abroad through foreign branches. 9. Protectionism is a minor factor in international investment. 10. The protection of foreign investment in case of war is in the self-interest of every single free world country. 11. World investment rather than world trade will be driving the international economy. Exchange rates, taxes, and legal rules will become more important than wage rate and tariffs. 12. Between 1986 and 1991 US manufacturing exports nearly doubled with big sales to Japan and West Germany. The export boom fuel US economic expansion. The list of export items during the economic jump, included: jet engines, heart valves, and sophisticated software. It included no tech items, such as, mov

On being a Drucker completist.

Published by Thriftbooks.com User , 15 years ago
It is difficult to know how much value it is possible to get from reading a book that examines future trends nearly 15 years after it was published. The earliest essay in this book was written in 1986. There is a nearly inevitable dated feel to this kind of selection that would kill the work entirely for lesser thinkers. Being Drucker, however, there is still an awful lot to draw from this collection. Divided into four parts (economics, people, management and the organization), there are a number of absolutely brilliant essays. Favorites are hard to choose, but I particularly recommend "The Poverty of Economic Theory" and "Permanent Cost Cutting: Permanent Policy". As usual from Drucker, darned good reading-- insightful and smart.
Copyright © 2020 Thriftbooks.com Terms of Use | Privacy Policy | Do Not Sell My Personal Information | Accessibility Statement
ThriftBooks® and the ThriftBooks® logo are registered trademarks of Thrift Books Global, LLC