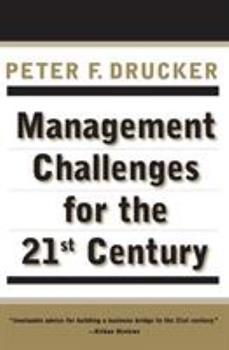 Management Challenges for the 21st Century

Peter F. Drucker discusses how the new paradigms of management have changed and will continue to change our basic assumptions about the practices and principles of management. Forward-looking and forward-thinking, Management Challenges for the 21st Century combines the broad knowledge, wide practical experience, profound insight, sharp analysis, and enlightened common sense that are the essence of Drucker's writings and "landmarks of the managerial...

Published by Thriftbooks.com User , 18 years ago
Peter Drucker has a beautiful mind, forever fresh and overflowing with innovative thoughts. This book, published just as the master of management began his tenth decade of life, shows him at his perpetual best. The text carries with it the sweeping knowledge, deep experience, and astute analysis that a reader might expect from Drucker at this point in his life. But you will find no timid conservatism, no holding on to safe ground here. Drucker has made a lifelong habit of leading the way in business thought and this book confirms that he just can't help himself.In contrast to the typical business book which is 200 pages too long, every chapter and every page of Management Challenges for the 21st Century relentlessly tweaks the noses of bad assumptions while focusing our attention on the future. Drucker pulls together diverse trends and forces to map out the truly new management challenges. His first chapter, "Management's New Paradigms" argues that organizations (or what ManyWorlds calls "business architecture") will have to become part of the executive's toolbox, yet we continue to operate on outdated assumptions about the role and domain of management. Fortunately much recent management thinking explicitly challenges one assumption pulled apart by Drucker: The idea that the inside of the organization is the domain of management. This assumption, says Drucker, "explains the otherwise totally incomprehensible distinction between management and entrepreneurship". These are two aspects of the same task. Management without entrepreneurship (and vice versa) cannot survive in a world where every organization must be "designed for change as the norm and to create change rather than react to it."Although Drucker is intent on uprooting old certainties and focusing organizations on constant change, he does not leave the reader without a compass. In the second chapter, "Strategy-The New Certainties", Drucker says that strategy allows an organization to be "purposefully opportunistic" and explains five certainties around we can shape our strategy. While other writers have addressed a couple of these, too little attention has been paid to some of the inevitabilities analyzed here, including the collapsing birthrate, shifts in the distribution of disposable income, and the growing incongruence between economic globalization and political splintering.The book's third chapter, "The Change Leader", gives Drucker's unique perspective on the need for 21st organizations to be change leaders. "One cannot *manage* change. One can only be ahead of it." Change leaders have four qualities. They create policies to make the future which means not only continual improvement but *organized abandonment* - a practice still almost unknown in practice. Contrary to typical company reactions, change leaders will starve problems and feed opportunities. For Drucker this means, in part, having a policy of systematic innovation and - in tune with recent calls for new budgetary practi

The Most Timely of Peter Drucker's Books

Published by Thriftbooks.com User , 21 years ago
MANAGEMENT CHALLEGES FOR THE 21ST CENTURY is a breakthrough work, even for Peter Drucker. Through 6 impressive essays, Professor Drucker sets the agenda for the next several decades, for every organization and individual. He begins by pointing out that the way most people think about management is all wrong, and immediately needs to be changed. He outlines the needed changes. He then picks the key strategy issues that will strongly affect all organizations for the next 50 years. Next, he points out that we live in turbulent times and that one must lead the changes that one's organization must make so they occur faster than for the competition. There is no choice for any organization, except to fail to survive. From there, he points out that we have information TECHNOLOGY, but very little information worth looking at on the devices the technology brings us. He goes on to define what must be done to create the right information. In a remarkable section, he then tells how to create knowledge worker productivity (something he has said in the past that no one knows how to do). Finally, he provides a remarkable essay on how to get the most out of yourself, for yourself. These essays were previewed in leading publications, and substantially improved from the originals. There is no repetition of his work and thinking from earlier books. This is like finding a whole new Peter Drucker. I especially loved the new examples that he included, as well as his historical references that only Peter Drucker can make. YOU ARE MAKING A BIG MISTAKE IF YOU FAIL TO BUY, READ, AND APPLY THE IMPORTANT LESSONS OF THIS BOOK. If you read only one book by Peter Drucker, read this one! I was especially pleased to see that he addressed the stalls that delay organizational progress such as the old habits reinforced by tradition, unwillingness to address the new through disbelief, poor communications at all levels (he states the rules that you must follow to be a better communicator and be more effective), needless interactions fostering mindless bureaucracy, the temptation to procrastinate (standing still in front of a truck about to run you over is a mistake you will not repeat), avoiding the unattractive key issues of your organiztion (he recommends doing the dirty jobs yourself for several weeks a year in order to understand how to improve), and failing to set high standards. As always, the book is filled with powerful questions that you can answer for yourself in order to accomplish much, much more and feel great while you do so. Read and apply the lessons of this book and you will have many more 2,000 percent solutions (achieving 20 times the usual results with the same resources or getting the same results 20 times faster).

The MOST IMPORTANT book on the FUTURE OF SOCIETY

Published by Thriftbooks.com User , 22 years ago
First published in Forbes magazine, California Management Review and Harvard Business Review, the six chapters in this book contain nothing that is an excerpt from Peter Drucker's earlier management books. Indeed, this book supplements Drucker's many earlier management books by looking ahead to the future of management thinking and practice.At 90, Peter Drucker is, by all accounts, the most enduring management thinker of our time. Born in Vienna, educated in Austria and England, he has worked since 1937 in the United States, first as an economist for a group of British banks and insurance companies, and later as a management consultant to several leading companies. Drucker has since had a distinguished career as a teacher, including more than twenty years as Professor of Management at the Graduate Business School of New York University. With a long-term business perspective second to none, Drucker's books span sixty years of modern history beginning with The End of Economic Man (1939) and Managing in a Time of Great Change; Management: Tasks, Responsibilities, Practices; Innovation and Entrepreneurship; The Effective Executive; Managing for Results and The Practice of Management.This book looks afresh at the future of management thinking and practice and defines new ways of delivering success. It deals exclusively with tomorrow's hot management issues-the crucial, central, life-and-death issues that are certain to be the major challenges of tomorrow. The biggest challenge will be knowledge worker productivity-what is it; how can it work; how do we manage knowledge workers and ourselves? Two fundamental issues addressed are changes in the world economy and the subsequent changes in management practice which will bring about new realities requiring new corporate policies as well as presenting new opportunities for the individual knowledge worker.Many of the individual knowledge workers affected by these challenges will be employees of business or working with business. Yet this is a management book rather than a business management book. The challenges it presents affect all organisations of today's society, particularly the more rigid and less flexible, i.e. the ones more rooted in the concepts, assumptions and policies of the 19th century. The challenges and issues discussed in this book are not new and are already with us in every one of the developed countries and in most of the emerging ones. They can already be identified, discussed, analyzed and prescribed for. Some people, someplace, are already working on them. But so far very few executives and even less organisations are. Those who do work on these challenges today, and thus prepare themselves and their organisations for the new challenges, will be the leaders and will dominate tomorrow.
Copyright © 2020 Thriftbooks.com Terms of Use | Privacy Policy | Do Not Sell My Personal Information | Accessibility Statement
ThriftBooks® and the ThriftBooks® logo are registered trademarks of Thrift Books Global, LLC