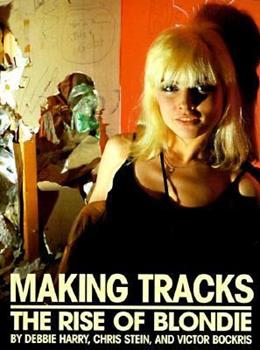 Making Tracks: The Rise Of Blondie

In the photographs of Chris Stein and words of Debbie Harry, Making Tracks details the story of Blondie, whose career propelled them from the depths of the Bowery to international renown as the hottest rock group in the world. Victor Bockris aided in the formation of the text and selection of photographs, which also provides an intimate portrait of the unique collaboration between Debbie and Chris.

Published by Thriftbooks.com User , 18 years ago
"Making Tracks: The Rise of Blondie" is a unique book -- part road diary, part band memoir. Rock biographer Victor Bockris teamed with Debbie Harry and Chris Stein to produce this book, a quirky and enlightening view of Blondie's rise to fame. Good anecdotes, wonderful pictures, and an intimate look into what it was like.Stein and Harry first give us a glimpse of their early lives and childhoods, and then the events that propelled them to the music biz, including early band stuff (like the Stillettoes). They lived in cold apartments run by very strange people (sometimes smoking even weirder stuff), were saved by the cats, performed in the legendary CBGB's, and swirled around the music scene with the Ramones, Television, the Kinks, and now-extinct punk journalists. Then they hit the big time, jetting across the world and clinging to their rough edges.Harry and Stein have not a single bad thing to say about their musical peers, only pleasant camaraderie. Harry's quirky wit is an easily-acquired taste; she's straightforward and dryly humorous. The parts that are more clearly Stein are a little less vivid to read. At times it's easy to get lost in the prose and forget which is which, however. What's more, the stories are less focused on the perks of fame than on the day-to-day life in a band.The only problem is that at times, it's necessary to skip back to figure out who the heck so-and-so is, and what connection he had to Stein and Harry. However, Bockris does an excellent job of slipping in articles and written anecdotes by Harry. While the result gets a little bumpy at times, it's overall a smooth ride through the years.The pictures are a mix of stylized publicity shots (like the pouty "Punkmate" picture) and candids. The candids are wonderful, ranging from Harry wielding a hammer in Japan to a window riddled with bullet holes to makeup for a Giger-inspired music video (truly eerie). The pictures seem spontaneous and natural, and the grubbiness of some of them gives a better idea of what it was like to live there. (Not to mention posing with the Ramones, Nancy Spungeon, Bill Murray, Joan Jett and others)"Making Tracks: The Rise of Blondie" is not merely for Blondie fans, but for fans of now-classic rock and good music. Witty and humorous, with dozens of great photographs, this is a treasure.

Published by Thriftbooks.com User , 19 years ago
Debbie's writing style (as ingested and regurgitated by Victor Bockris) is attractrively candid, humorously intimate, and appealingly self-effacing. Debbie tells her story simply and with no frills and no excuses. She lovingly describes details of the CBGB's music scene of the late '70's down to the last detail, with a touching respect for her peers and nary a bad word to say about anyone. includes exerpts from diaries Debbie wrote on the road as well as reformatted material from various obscure magazine interviews circa 1977-1981, but editor Bockris blends it all so well it reads like one coherent monologue. In actuality, Bockris has morfed Harry and Stein's voice into one here, so it's impossible in some areas to know who is speaking. In interviews, Debbie has made reference to a "third" person that she and Stein create when they're together. You might say that person is the true author of "Making Tracks". Travelogue-style photos by Stein skimp on glamour-Debbie but compensate by invoking the environment from which she and the band sprung!

A must have for any Blondie fan...

Published by Thriftbooks.com User , 20 years ago
Great information, great pictures, very interesting reading. I am so glad this band has endured. They have earned it. Keep on going!

Published by Thriftbooks.com User , 20 years ago
Reading the book "Making Tracks", I found it very interesting and informative. Reading how Deborah and the boys had a rocky gritty start and really had to persevere in New York to make it big was entertaining. I liked the part where they had to convince people they were a rock 'n roll band but still wanted to play a disco song in "Heart of Glass." They found many of their followers did not get the irony. Nor the media also, as they thought Blondie was a punk band, a radical and rebellious term that held them back. Yet they broke out and made it to the big time, with more than their fifteen minutes of fame. Making Tracks is a book that lets you in on the inside of the record business. When I read that Blondie was paid a weekly salary, I thought this was kind of odd, even successful artists can be treated as simply lowly employees of a big corporation, just like anyone. And be just as powerless to change things. The book states how the movie scripts Blondie received were shockingly horrid. One movie script was about Harry in a band, and has a manager who kills a fan for publicity. Other scripts draw her as a nymphomaniac. So obviously they turned them all down. Too bad no independent film producer was found to make a good movie for the band. Rock 'n roll stars are big these days and still comeback because it seems the culture has unfinished business with them. There seems to be something about Blondie, there is of course, there is something behind the music we need to find out. Making Tracks is a book worth reading for those interested in music and the business of music. And of course the great band Blondie and the great singer Deborah Harry.

Published by Thriftbooks.com User , 23 years ago
The book was excellent, I now know things about the group that I would never have believed. She went through some rough times, but she still turned out to be the best female artist that ever lived. If you have any other information about her or where I could get more besides her web site, it would be greatly appreciated. Thank You.
Trustpilot
Copyright © 2022 Thriftbooks.com Terms of Use | Privacy Policy | Do Not Sell My Personal Information | Accessibility Statement
ThriftBooks® and the ThriftBooks® logo are registered trademarks of Thrift Books Global, LLC