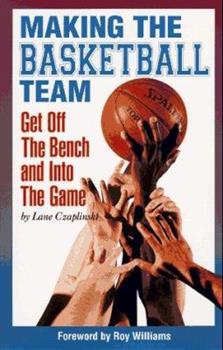 Making the Basketball Team: Get Off the Bench and into the Game

Book by Czaplinski, Lane This description may be from another edition of this product.

Excellent Tips from the Man Who Did It

Published by Thriftbooks.com User , 23 years ago
If you have a son, daughter or friend who lacks superstar ability but who wants to make the team, this is the book. In my case, my sons are at the age where dad's advice doesn't carry as much weight as that of someone closer to their age. This book solved that problem. I highly recommend it for its practical and witty presentation of common-sense truths that everybody who has ever tried out has seen.

Here's a review of my book:

Published by Thriftbooks.com User , 23 years ago
CZAPLINSKI OFFERS TIPS FOR TRYOUTS by Pete Goering Topeka Capital-Journal Lane Czaplinski's new book offers a slam dunk dedication for basketball players who can't dunk: Dedicated to those names who were never called, when choosing sides for basketball. Many have been there, done that. The anguish and embarrassment of awkwardly, nervously waiting to be chosen, only to be left out, or to be the very last person picked simply because everbody has to play is a cruel introduction to athletics. For some, it's also a traumatic goodbye. Czaplinski, the former University of Kansas walk-on, tries to change that with his book, "Making the Basketball Team: Get off the Bench and into the Game," published by Quality Sports Publications. What, you ask, is Czaplinski, the Director of Education at the University of Kansas Lied Center, doing giving tips about making a basketball team? Wouldn't Danny Manning or Rex Walters or Mitch Richmond be a better author than Czaplinski? Nothing against them, but...no. The beauty of Czaplinski, somewhat affectionately known as Roy Williams' victory cigar, writing a book is that he knows what it takes for a person who doesn't have the skill of a Manning or Richmond to succeed. "I felt I had a viewpoint I could share," said Czaplinski, whose father, George, was a long-time basketball coach. "My Mother told me she could relate better to me than to say, Dr. J." Czaplinski, a senior on KU's 1991-92 team that was upset by Texas-El Paso in the NCAA Tournament, tries to relate to the average player who is getting ready for basketball tryouts. I'm guessing the timing of his book, coming out as it does on the eve of most tryouts, was no accident. His book includes the usual technical instruction, but its strength is the practical advice Czaplinski offers. "Go (to practice) early, stay late, give tremendous effort, use your head and concentrate on being in the right place at the right time," he suggests. And don't act cool. "I think kids have (watched players who are) poor examples," Czaplinski said. "They think they should act cool, shuffle around and look slouchy with their pants halfway down the legs. That's fine if you're 6-foot-6. Then, it doesn't matter if you stand around: you always get to play anyway. I wasn't that way. Neither are most of the athletes who will be trying out for basketball teams in the upcoming weeks. To them, Czaplinski offers plenty of tips, but not without a disclaimer. Just reading his book won't guarantee anyone a spot on the roster. In fact, it may already be too late for some would-be players. "Kids aren't going to be able to read the bood and change their lives," said Czaplinski, who says the best preparation for tryouts is also the most basic - practice, practice, practice. "Play more than any

Published by Thriftbooks.com User , 23 years ago
Lane Czaplinski's "Making the Basketball Team: Get Off the Bench and Into the Game" is the only self-help book that may actually help someone instead of driving them into therapy. Czaplinski, who played for the Kansas University baskeball team in 1991-'92, was arguably the most beloved and hardest working Jayhawk basketball walk-on ever. The same determination, talent and intelligence that landed him a varsity spot underpins his book, a step-by-step guide to how to play the fundamentally sound, defensive and team-oriented game that is widely known as "Kansas Basketball." From the basics of ball handling, foot and body positioning on defense and proper shooting technique through the even more important mental aspects of the game, Czaplinski tells, and illustrates, what it takes to be a better ball player. Although the book stresses hard work, practice and perseverance, Czaplinski writes without the preaching or flakiness of most sports how-to authors. He also spells out regimes and drills and even includes a model chart to help players document, and reflect on, their daily training. Conversational, witty, encouraging, well-organized and incredibly informative, "Making the Basketball Team" will do wonders not only for beginning players, but also for advanced ones.
Trustpilot
Copyright © 2022 Thriftbooks.com Terms of Use | Privacy Policy | Do Not Sell My Personal Information | Accessibility Statement
ThriftBooks® and the ThriftBooks® logo are registered trademarks of Thrift Books Global, LLC