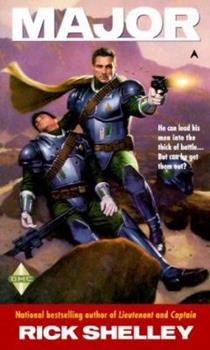 This description may be from another edition of this product. The year is 2804 AD. Humanity has colonized the universe. But the authority of the Confederation of Human Worlds is spread thin. Where the Army of planet Earth cannot reach, mercenaries must keep the...

Biography of a Professional Soldier of the future.

Published by Thriftbooks.com User , 21 years ago
Rick Shelley's book "Major," (ISBN 0-441-00680-9) is the fourth in his series chronicling Lon Nolan's life as a soldier in the Dirigent Mercenary Corps (DMC) is well worth reading. Lon Nolan's adopted home world of Dirigent's major source of revenue is selling the services of professional soldiers and the exporting of military equipment and munitions. Lon has advanced relatively quickly to the rank of Captain in the DMC and is commanding officer of Company A, 2nd Battalion in the 7th Regiment, which is at the top of the contract list for deploying to another world. Prior to the three month contract to train the police militia on the world of Bancroft, Captain Lon Nolan is called to sit as a member of a General Court-martial the results of the weigh heavily on him even after the case is over. The training contract goes well until Lon learns that Bancroft's mining settlements, which are the world's major source of revenue, are being attacked by one or more parties of raiders, who steal the products produced by the mines. Captain Nolan, after negotiating a rider to the contract, leads three of his platoons in to Bancroft's wilderness on a mission to attack, capture, and, if possible, eliminate the raiders based on very little information. The Dirigent Mercenary company looses the first encounter with a group of raiders, but only makes Captain Nolan that much more determined to bring them to bay. You must read the book to find out what happens to Captain Lon Nolan and his troops.
Copyright © 2020 Thriftbooks.com Terms of Use | Privacy Policy | Do Not Sell My Personal Information | Accessibility Statement
ThriftBooks® and the ThriftBooks® logo are registered trademarks of Thrift Books Global, LLC