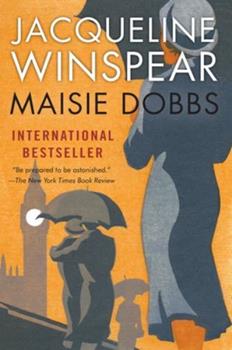 (Book #1 in the Maisie Dobbs Series)

"A female investigator every bit as brainy and battle-hardened as Lisbeth Salander." --Maureen Corrigan, NPR's Fresh Air , on Maisie Dobbs Maisie Dobbs got her start as a maid in an aristocratic London household when she was thirteen. Her employer, suffragette Lady Rowan Compton, soon became her patron, taking the remarkably bright youngster under her wing. Lady Rowan's friend, Maurice Blanche, often retained as an investigator by the European elite,...

Published by Lisa , 4 days ago
This is truly one of the most frustrating and boring books I've ever read. If I could give this book zero stars, I would. It's filled with nothing but purple prose while simultaneously telling, not showing, the events of the story. The pacing is horrendous, there's a time skip to the past for most of the book that has no bearing on anything. I ended up skimming about 6 chapters and missed nothing. The most heinous example of purple prose is in a later chapter. The author spends an entire paragraph trying to make touching a hot car door handle this profound moment. It doesn't even set up anything. It's just there to make Maisie sound philosophical, I guess, but really just ends up taking up space. The characters are all one dimensional (due, in large part, to us just being told of their traits instead of shown). Maisie "not like other girls" Dobbs is absolutely perfect and everyone adores her for seemingly no reason. Everyone is immediately struck by her, saying she's "unusual" or "different", within a very short conversation that usually subsists of nothing more than cordial greetings. Maisie seems to have an almost supernatural ability (which, honestly, would have made this book more interesting) to figure out what someone is thinking and feeling. The plot itself is all set up and no pay off. The "mystery" is set up at the end of the first third of the book and is picked up after 12 chapters of backstory. It was extremely predictable because it had such little screen time. Even the resolution of the mystery wasn't satisfying because we're told through dialogue instead of seeing it first hand. That's not even mentioning the "romance" aspect of it. We're supposed to believe two characters are in love only because we're told they are. We see snippets of conversation between the two that don't suggest much chemistry. We're told later that the conversation was amazing, but we're never shown it. I was recommended this on a list of "modern authors to read if you like Agatha Christie" and this doesn't even come close. I would take the worst Christie novel over this. All of that being said, if you really love historical fiction with a backdrop of mystery (instead of the mystery being the focus of the novel) and every detail of scenery described, then you may enjoy this book. I, however, will never read another book from this author again.

The best series I have read in a long time

Published by Thriftbooks.com User , 16 years ago
I started reading Maisie Dobbs and ended reading all three book in the series in one week-end. I am now sad that I don't have another one of Winspear's books to read. I have recommended this series to everyone I know who likes to read. Although the books do have some mystery elements, the mystery is not the focus. The third in the series--Pardonable Lies--was the least satisfying, but it was still good.

The Start of a Beautiful Friendship!

Published by Thriftbooks.com User , 16 years ago
Never much of a mystery reader, in the last number of years I have been introduced to two wonderful female detectives of sorts. One was Fremont Jones, a private detective based in San Francisco at the turn of the century and the heroine of a series written by Dianne Day. The other was Mma Ramotswe from the Alexander McCall Smith mystery series set in Botswana, Africa. While I enjoyed the mystery angles of both series, it was the women and their personalities, the geographical areas where they lived and the historical times which intrigued me so greatly. And as much as I loved these books, I remember thinking that I most likely would never find another female character from this genre who would appeal to me in quite the same way. But then I didn't know that very shortly I would meet up with the most intriguing character of all, one Maisie Dobbs from the book with the same title by Jacqueline Winspear. And as I said in the title of this review, I just know this is the beginning of a wonderful friendship. We first meet Maisie Dobbs in 1929 when she is moving into her first office in London. A private detective, Maisie has been tutored and apprenticed by a Dr. Maurice Blanche who is highly regarded in London's social circles. Her first case seems rather ordinary when a man suspects his wife of cheating on him. Following the woman in question, Maisie finds a lady mourning a childhood friend killed during W.W.I. But more than that Maisie also uncovers a rather sinister plot involving a farmhouse used as a retreat for men unable to rejoin society. Called the Retreat it holds the answer to why certain war heroes met untimely deaths while living at the Retreat. While this book is considered a misery it almost takes a back seat to the main character for as we turn the pages we learn more and more about Maisie and her circumstances. In a series of flashbacks we first meet Maisie at 13 when her mother has died and her father, a costermonger, has no money left for Maisie's education due to the medical expenses for his wife. Maisie's father then finds a job for her as a scullery maid in the home of Lady Compton, a wealthy woman and suffragette. While working in this large London home, Maisie soon finds a wonderful library which appeals to her sense of learning. When she is found there one night by her employer while poring over a book, Lady Compton arranges for Maisie to be tutored over a period of years, then paying for her to attend Girton, the women's school from Cambridge. But then war intervenes and the book takes a different turn as Maisie faces World War I working as a field nurse and learns about both the joys and sorrows of a first love. I so enjoyed this book that I literally gulped it down. I found that Ms. Winspear offered her readers a wonderful glimpse into the world of London before, during and after W.W.I. From the drawing rooms of the wealthy homes to the life of a young nurse, I felt as though I was in London during these times,

The Best In A Decade

Published by Thriftbooks.com User , 16 years ago
Brash statement, huh? I am an inveterate reader of mysteries (wrote a few myself) and I am greatly disappointed in most writers, except Colin Dexter (not writing any more) Reginald Hill (still the Master) and Dennis Lehane (too changeable, suddenly but with the sharpest typewriter among American Mystery authors). It is great to pick up a book and from the first sentence get an a prickly feeling, this is it! Yes, it is fantasy (no, not SF)with a very short list of characters-the entire book is half what the usual overwriters produce today- with great punch and depth. One does not have to write pages to convey what a character feels. Maisie is 14 when her mother dies and her father, another fairy tale character, takes loving care of her. And Lady Rowan, and Maurice Blanche. The midnight reading of the great books in the library, and still get up early morning to do the chores, the feeling of inevitable success are all conveyed in short incidents. There are three parts to the story: a short beginning with a whimsical mystery about a suspicious husband, and Maisie establishes her pro-feminine character in no uncertain way (shades of Cordelia Gray). The second and the most moving part, exqusitely written, is an Upstairs Downstairs story that culminates in the Great War, and unlike Bulldog Drummond, portrays an honest and perhaps the best short poignant description of the sufferings put between covers. The third part is another investigation, this time directly the result of the war. You finish the book with a great sigh of satisfaction. Writing like this has not been in print since Ms. Dorothy L Sayers. Good luck, Ms. Winspear! I am holding on to the next book for a nice Indian Summer weekend, to enjoy.

A delicious blend of mystery and history

Published by Thriftbooks.com User , 17 years ago
Maisie Dobbs is the type of character who comes alive during a book and lives on in the imagination of the reader. I regretted reaching the last page and having to close the book, I so enjoyed the company of this independent woman of such essential goodness, insight and compassion. Strangely, this novel captured my imagination just as THE LITTLE PRINCESS did when I was very young. I was dismayed to read some of the negative reviews and felt compelled to cast my own vote in favor of this intelligent and unique novel. The author does a superb job of capturing pre-World War I England, and what it must have felt like to have been an intellectually ravenous young girl with limited prospects due to the rigid class structure. Maisie creates a brighter future for herself just as the class system in England was undergoing tectonic shifts due to the War. In a subtle but effective manner, the author conveys the enormity of the War's impact on every man, woman and child.

Published by Thriftbooks.com User , 18 years ago
While Maisie Dobbs is certainly less "literary" than "The English Patient," in the course of an entertaining, mystery-driven read, it gives us new perspectives on the impact of the Great War and the suffering it caused. Who knew that when maimed young men returned from the front, they were made uncomfortable by "normal" society and sought refuge in camps where they could be among their own? The book also introduces a character like no other. Maisie is a woman of her time in that she is riding the crest of change (the work women performed during the war changed things for her gender). But as a sleuth, she relies on her highly trained powers of intuition much like Sherlock Holmes relies on his ability to observe and deduce. Oh yeah, if you liked Gosford Park and Upstairs Downstairs, you'll eat up the back story in this book, which tells of Maisie's early life below stairs and occupies a large portion of the story in flashback. In all, Maisie Dobbs is a charmer and a page turner that leaves one wishing it was a hundred pages longer.
Copyright © 2020 Thriftbooks.com Terms of Use | Privacy Policy | Do Not Sell My Personal Information | Accessibility Statement
ThriftBooks® and the ThriftBooks® logo are registered trademarks of Thrift Books Global, LLC