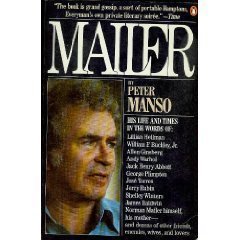 Mailer: His Life and Times

THE DEFINITIVE, AUTHORIZED ORAL BIOGRAPHY OF THE AMERICAN ICON The winner of every major national literary award, the preeminent novelist of his generation, a Pulitzer Prize-winning journalist, a... This description may be from another edition of this product.

Published by Thriftbooks.com User , 13 years ago
I read Manso's oral biography when it first came out in 1985, smitten by the matrix of competing testimony that somehow balanced out the extremes, and made Mailer seem alive, animated with ambiguity, endearing in his flaws, and audacious in his ambition. Now, in this new edition, Manso has added an afterword, detailing the breakup of their friendship and working partnership. He has lost all sight of Mailer as a subject of biography. In sixty pages of unfocused anger, he attacks the very people who were crucial to Mailer's life since Manso's account ended. He gives us a picture of the great author as a desearate to keep his name before the public with a series of what Manso calls "non-books," ignoring the accomplisments of key books written after their breakup, including Gospel According to the Son and the Castle in the Forest. He badmouths Mailer's biography of Picasso as a plagiarism of John Richardson. His screed is especially mean-spirited toward the very people Mailer drew around him in his last years: Larry Schiller, J. M. Lennon, and his wife Norris. Toward Norris, he is most poisonous, willfully distorted each positive attribute into a hideous caricature. I felt a flush of shame pass across my face, shame that Manso should fall so low as to rage against the man he so admired. In the afterword, Manso also belittles Provincetown Arts, the magazine I edit, saying that I rejected an excerpt for his 2002 book "Ptown: Art, Sex, and Money on the Outer Cape." Indeed, I did, but not, as Manso said, because I wanted to make cuts unacceptable to him, but rather because Manso came over to my house and demanded that I put his name in a banner across the logo on the magazine's cover, saying that Vanity Fair did so when his Brando book came out. The cover feature that year was Sebastian Junger, author of the Perfect Storm, and Manso said, "I'm as famous as Junger--I want equal billing!" Mailer's egotism posseses charm, Manso's arid self subsists on its own festering bile.

Published by Thriftbooks.com User , 20 years ago
I'm a fan of oral biographies, of which this is one. I like the immediacey of collected interview quotes, so like the way this book was presented. It's an interesting look at Mailer's life. The bit that impressed me most, was the example of the liberal elite giving a free pass to Mailer for committing a violent crime because he was one of theirs. When Mailer stabbed his wife, sending her to the hospital for a good stay, and himself to an insane asylum, the New York liberal elite pretty much excused Mailer for his behavior! The cocktail party talk about Mailer in Fifth Ave apartments was that Norman must have been a little upset, etc. He was in their clique so it was okay! It was a total duplication of the liberal elites' excusing of Bill Clinton's raping Juanita Broaddrick (read Christopher Hitchens' book NO ONE LEFT TO LIE TO for more on that). Hitchens interviewed three women who independent of each other said Bill Clinton raped them. But the liberal elite excuses Bill Clinton because he's one of theirs! I can't help but think that being a member of the liberal elite is like being the member of a cult. Anyway, it's stuff like this that makes Manso's biography of Mailer worth reading.
Trustpilot
Copyright © 2022 Thriftbooks.com Terms of Use | Privacy Policy | Do Not Sell My Personal Information | Accessibility Statement
ThriftBooks® and the ThriftBooks® logo are registered trademarks of Thrift Books Global, LLC