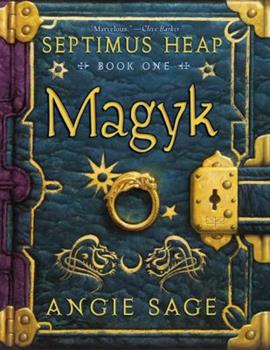 (Book #1 in the Septimus Heap Series)

Just stuck with me.

Published by Eeriecrimson , 8 months ago
I read this book once in middleschool and it had always stuck with me despite not remembering the name. I came across is now six years later and just had the need to read it and pursue the rest of the series. It has good humor and despite being for 10+ I found it very enjoyable as an adult.

I'm in love with the way she writes

Published by Diana , 10 months ago
I usually have trouble getting into a new book, but this one I practically fell into it. I haven't even finished it yet and I bought the next in the series and have the third one in my cart. She has a marvelous way of including loads of details and descriptions without bogging down the story. Reading this makes me want to bury myself in her writing so that when I write, maybe I can sound at least a little bit like her. I highly recommend this book.

Liked it enough to purchase sequels

Published by - , 11 months ago
This was a pretty unique plot line that kept me engaged. It's not on my favorite list of books of all time by any means, but I enjoyed reading it enough that I bought most of the rest of the set! This book is definitely okay for kids starting at elementary age- the only "bad" content is that someone gets injured by being shot.

Published by Raysa , 1 year ago
I have just finished reading this book and was amazing. I love the story and its fast pace, it's perfect for people who enjoyed or love Harry Potter. I recommend it, love it, and already started reading the second book Flyte.

Published by Thriftbooks.com User , 13 years ago
I actually hesitated to buy this book because the Artemis Fowl books put me off so much. With a vaguely similar title and premise I put off reading "Magyk" for a long time. But we were at a local shop before a weekend of lazing around at the park, and I needed something to read, so I grabbed it. It's surprisingly good, although it does have a writing style that reminds me of "Peter Pan." Occasionally I'll read a kids' book that reads as though it were written by the author for his/her children - perhaps a fleshing-out of a bedtime story they shared - and this one is like that. I can't really pinpoint why. The characters do make a big fuss out of the funny domestic habits of their dog. That might be part of it. Anyway, I really enjoyed it and cruised through it in one sitting of about 2 hours. The one thing that bothered me (which some people feel is trivial, I know) is that this starts out seemingly in a fantasy world, where people can learn Magyk and cast spells; the architecture & lifestyle seem like mid-19th century. Then later in the book an Egyptian character (long dead) is mentioned and some particulars of his country are given. Water creatures on their way to the Sargasso Sea are mentioned. So I don't know whether this is set in some post-technological future time, or what, but it bothered me.

Published by Thriftbooks.com User , 15 years ago
If you've been looking for a series that combines the magic of Harry Potter with the imaginative characters of Artemis Fowl, then Septimus Heap and his first book, MAGYK, is definitely the story for you. A quick, delightful read that can stand on its own, MAGYK is, without a doubt, an intriguing page-turner. Septimus Heap, the seventh son of a seventh son, died shortly after birth. Born to a family of Wizards, there's no telling what he might have become, as his lineage as a seventh son would have made him unbelievably magical. But on that winter night when Septimus died, his father, Silas, found another newborn child in the forest. They named her Jenna, and she grew up thinking that she was the daughter of Silas and Sarah Heap, and the sister of six older brothers--Simon, Sam, Edd, Erik, Nicko, and Jo-Jo. Early on, though, Sarah had her own ideas of who Jenna really was, especially when she heard the news that the Queen had been murdered. Jenna Heap was, undoubtedly, the Princess. Over the next ten years, darkness came to the Castle and the Ramblings, where the Heaps lived. With no Queen, evil came in the form of the Supreme Custodian, who along with his cohorts banned magic and ended the happiness the Queen's people had once known. As the Heap family attempt to ride out this time of darkness, the ExtraOrdinary Wizard, Marcia Overstrand, learns of the plot to kill the Princess, which will allow evil to truly take over the Palace. It seems that the only thing keeping DomDaniel, the Dark Wizard, from returning to the Castle is the presence of the Princess, and he plans to remedy that. What follows is the flight of Jenna, Nicko, the ExtraOrdinary Wizard, and a Young Army recruit known only as Boy 412 to the Marram Marshes, where Aunt Zelda Heap, a White Witch, will be able to keep them from harm. As events unfold and DomDaniel does everything within his power to track down the girl standing between him and a ruling darkness, the Heap family will have to do everything within their means to stop him--and at the same time stay alive. MAGYK is a delightful, entertaining story filled with action-adventure and fantasy. With a very large cast of characters who are as diverse as they come, this is one story not to be missed. If you like Harry Potter, you will definitely enjoy Septimus Heap. Filled with twists and turns, this is a story you'll stay up reading long into the night. And although at times predictable, you'll quickly be drawn into the life and times of the Heap family and their magical world. Reviewed by: Jennifer Wardrip, aka "The Genius"

Published by Thriftbooks.com User , 16 years ago
Magyk is a well-detailed book by Angie Sage. Fans of Harry Potter will simply adore this book! Not only does this book contain fantasy, but also humor, mystery, and alot of action! Take it from me... I loved it! -Shane

Published by Thriftbooks.com User , 17 years ago
I am reading it outloud to my 10 year old daughter, and she is loving it (and so am I)! The quality of the writing is not in the same league as that of Narnia or the Ring books, but it is certainly more accessible to a 10 year old than the Potter series.

Published by Thriftbooks.com User , 17 years ago
"Septimus Heap, Book One, Magyk" by Angie Sage is possibly one of the best children books to have come out this year. With a colorful cast of fully drawn characters, creative plots, and pure imagination and control over her world, Sage takes her first plunge into the world of childrens' novels and succeeds wonderfully. It's not the magic that makes Magyk such a great novel, it's the characters. Readers will race along with the thoughts, emotions, and experiences of the quirky main characters of Jenna (a girl who just might be Queen), Boy 412 (a mysterious child from the young Army), Marcia (The very fashionable ExtraOrdinary Wizard), and Nicko (Jenna's brother and sailor). There are so many other enjoyable characters that mentioning them all would just take too long. My particular favorites are Boggart, Boy 412, and Marcia. The style of Angie Sage is truly enjoyable and endurable for all ages. Her style really reminds me of another up-and-coming talent Anna Dale, who wrote the truly amazing story 'Whispering to Witches'. If you enjoyed 'Magyk', you'll enjoy that book as well. Anyways, will these characters ever stop the menacing necromancer DomDaniel from taking over the land? And who is Septimus Heap (the mysterious title character who seems will never appear)? Read this amazing novel to find out. You will not be disappointed.
Trustpilot
Copyright © 2022 Thriftbooks.com Terms of Use | Privacy Policy | Do Not Sell or Share My Personal Information | Accessibility Statement
ThriftBooks® and the ThriftBooks® logo are registered trademarks of Thrift Books Global, LLC