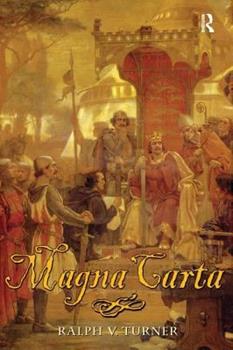 This new history is the first to tell the story of Magna Carta 'through the ages'. No other general work traces its continuing importance in England's political consciousness. Many books have examined the circumstances surrounding King John's grant of Magna Carta in 1215. Very few trace the Charter's legacy to subsequent centuries and even fewer look at the fate of the physical document. Turner also underlines its great influence outside the United...

Turner on Magna Carta: Not Unbiased but Nonetheless Useful

Published by Thriftbooks.com User , 18 years ago
Ralph Turner's book is a welcome addition to the abundant literature on Magna Carta - welcome because it takes advantage of the latest knowledge of, and research on, the Great Charter. On the other hand, Mr. Turner has an obvious bias in favor of the unwashed masses and the latest fashions in post-modern moral relativism, perhaps owing to his substitution of these fashions for a previous Marxist bent. For example, he celebrates without reservation the recent U.S. Supreme Court decision in Lawrence v. Texax that held that no State may criminalize homosexual conduct - despite the age-old legal tradition that, as Blackstone said in his great work Commentaries on the Laws of England, such conduct constituted the "infamous crime against nature." Another defect in the book is its use of tertiary sources that refer to secondary sources that don't refer back to original sources. To understand the context of these sources and what these sources really are, the reader must have a wide-ranging background in the first place. On the other hand, Mr. Turner gives a good, highly readable historical account and perspective not only on the events surrounding the 1215 Charter but also on subsequent consequent events such as the 1628 Petition of Right and the 1688 English Bill of Rights. This information is important for both British readers and American readers: the Founders of the American Constitution labelled these three documents - Magna Carta (1215), Petition of Right (1628), and English Bill of Rights (1689) - as "the bible of English liberty." Moreover, they copied or paraphrased many of the provisions of these three documents and incorporated them into the American Constitution (ratified 1789) and Bill of Rights (ratified 1791). Among these provisions are the right to petition the government for redress of grievances, the right to have ordinary personal arms, restrictions on quartering soldiers, due process of law, habeas corpus, trial by jury, speedy trial, and a ban on cruel and unusual punishments. All in all, Mr. Turner's book is a good read: even a serious high-school student can benefit from reading it.
Trustpilot
Copyright © 2022 Thriftbooks.com Terms of Use | Privacy Policy | Do Not Sell My Personal Information | Cookie Preferences | Accessibility Statement
ThriftBooks® and the ThriftBooks® logo are registered trademarks of Thrift Books Global, LLC