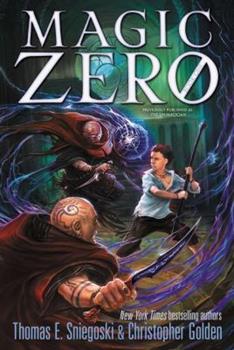 (Book #1 in the OutCast Series)

Timothy has great potential for power--no magic necessary--in this start to an action-packed fantasy series from two New York Times bestselling authors. In Timothy's world, everyone has magical powers. Except him. He has spent his entire life as an outcast hidden on a remote island. When he is finally taken back to the city of his birth, Timothy is fascinated by the current of magic that fuels the world and mesmerized by the buildings and orbs that...

Published by Thriftbooks.com User , 15 years ago
In the world of OUTCAST, everyone and everything is magic. Everyone, that is, except for Timothy. For his own safety, his kind father kept him hidden away for years, providing him with a safe haven and a chance at a decent - albeit magic-free - childhood. When his father passes away, Timothy is flung back into the world. Now everyone knows he exists. Who can he trust? Where can he go? He must decide who his allies are - and quickly, because assassins are coming for him. The books are packed with action, fantasy, and drama. Timothy is surrounded by intriguing, strong characters: a warrior who can blend in with his surroundings; a robot buddy of his own creation; firebreathing, war-torn dragons; a talking raven named Edgar; and Cassandra, a girl who may or may not be on the same side as her power-hungry grandfather. THE UN-MAGICIAN is a magical beginning to the OUTCAST quartet. Grammar school kids can read the series with very little trouble. The books are also great to read out loud. I recommend OUTCAST: THE UN-MAGICIAN to any family that enjoys fantasy series. There's something here for everyone, whether you like the otherworldly creatures in The Spiderwick Chronicles or the battles and tribunals featured in Star Wars.

Published by Thriftbooks.com User , 16 years ago
This book is the best! I couldn't have asked for a better book. If you are thinking about buying this, do it. I couldn't stop reading it was so good! ( I would have rated this book a ten if possible)!

Published by Thriftbooks.com User , 16 years ago
A cut above your normal teen-market fantasy that wouldn't be out of place on the adult shelves. In the same vein as 'Mortal Engines' this novel has a fluid quality that a collaboration of two authors doesn't normally have. An unusual situation is presented; in a world where magic is the norm - in fact a must - appears a boy who possesses none. Moreover, magic doesn't seem to recognise him, and his touch dissolves spells. Add to this his extraordinary mechanical aptitude, which makes him an extremely dangerous quantity to the panicked establishment, who will stop at nothing to be rid of him. But is all as it seems? ... Credulity is stretched at times, but one can forgive that as the pace and flow of this engaging fantasy carries one along, immersed in the story, that ends rather abruptly, in preparation for the sequel. ****

Published by Thriftbooks.com User , 16 years ago
Awesome fun read! Golden and Sniegoski do it again. If loved their other books this one won't disappoint! Absolute fun, full of imagintive wonderful things and a super fast read too!
Copyright © 2020 Thriftbooks.com Terms of Use | Privacy Policy | Do Not Sell My Personal Information | Accessibility Statement
ThriftBooks® and the ThriftBooks® logo are registered trademarks of Thrift Books Global, LLC