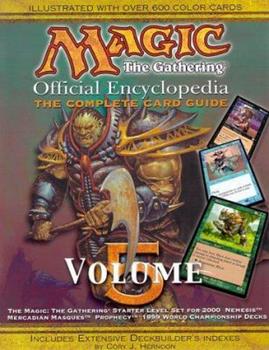 Still doling out a few expansions at a time...

Published by Thriftbooks.com User , 20 years ago
Volume 5 covers Magic: The Gathering Starter Level Set for 2000, Mercadian Masques, Nemesis, and Prophecy. I wish the powers-that-be would get their act together and collect everything to date into a single volume. Instead, as usual, this volume only deals with expansions released since the previous volume of the encyclopedia.Before launching into the expansion chapters, the usual introductory material includes a Magic timeline, including the 'for beginners' decks (e.g. Portal), the basic sets, and the expansions. This volume has been padded a little with profiles of 3 of the artists, including some alternate sketches of various cards, e.g. Grim Elf of Vengeance, which was pulled from the Unglued set as *too* grim and vengeful for that expansion.Each set of cards covered in Volume 5, as usual, is provided with an introduction, describing any new twists added for that set (including new types of decks that came about as a result), and any famous (or infamous) cards in that set. (A blowup of the artwork of Lin Divvi, Defiant Hero appears in a sidebar for Nemesis, "This Rebel's Too Cool for School".) The introductions provide an informative overview (including descriptions of storylines that were added or updated by the release being described). (Volume 1's introductions were more entertaining, due to the much higher number of problem cards in earlier decks.)The individual cards for each set are listed in alphabetical order; they're shown at about 3/4 actual size. The versions of Magic that included those cards (at the time of printing) are specified, as well as any errata. The card lists' images are enough to hold the attention of even a casual collector, since the flavor text is legible and the artwork is printed well.After covering the individual sets, the book gives an overview of 1999 World Championship decks. Three pages near the end of the book discuss, respectively, Misprints & Oddities (such as the alpha-version Orcish Oriflamme with a casting cost of 1 rather than 3), Promotional Cards, and Playtest Cards. The book concludes with a "Deckbuilders Indexes" section, as in the earlier volumes of the Magic encyclopedia.

volume 5 in an essential line

Published by Thriftbooks.com User , 20 years ago
Frustrated collectors have long valued these books as a way to see full-color reproductions of those cards they haven't acquired yet. Deckbuilders love the indexes found in the back of these books. As usual, the front pages have nice historical details on Magic as a whole, and each section has details on that particular set. Recommended highly.

Published by Thriftbooks.com User , 21 years ago
This book is an essential piece of work for the player who wants to know the newer cards. The cards which are coming nowdays are very complex and it is important that you have a reference so that you can get an idea of what you might be facing and to use this information to get ideas on how to stop or counter it.
Copyright © 2020 Thriftbooks.com Terms of Use | Privacy Policy | Do Not Sell My Personal Information | Accessibility Statement
ThriftBooks® and the ThriftBooks® logo are registered trademarks of Thrift Books Global, LLC