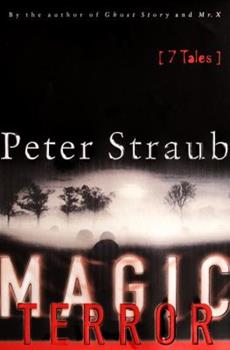 No one tells a story like Peter Straub. He dazzles with the complexity of his plots. He delights with the sophistication and eloquence of his prose. He startles you into laughter in the face of events so dark you begin to question your own moral compass. Then he reduces you to jelly by spinning a tale so terrifying-and surprising-you wind up sleeping with the lights on. ???????? With Magic Terror, the bestselling author of Ghost Story and The Talisman...

Published by Thriftbooks.com User , 18 years ago
Stephen King summed up Peter Straub with this excellent statement, "He is the only one out there in the [horror] field writing bona fide literature." This collection of seven tales (most of which are novella length) just proves this true. However, to be honest, the short tale is not Straub's strong point. He works best in long, intricate narratives that both use and deconstruct the thriller genre, all the while saturating the story with literary and cultural references, parodies, and homages. Each of the stories collected contain some of these elements, but not all of them.Ashputtle will have you rethinking that pudgy grade school teacher you mocked, or the one you now entrust with the education of your child. Isn't It Romantic has an assassin on his last job and rethinking his first job in a new light. The Ghost Village is yet another story linked to his classic Blue Rose trilogy, as is the horrifying Bunny Is Good Bread. Which explains just what made a mysterious killer the way he was. Porkpie Hat is a classic tale, the story within the story not only a beautiful return to the ghost story form for the author, but it is also Straub at his deconstructionist finest. Revelling in how our storytelling allows us to communicate a hidden truth and overcome tragedy. Hunger, An Introduction offers yet another story within a story, trying to make us understand what makes ghosts haunt us so. It also expands on themes presented in The Ghost Village quite nicely. The closing story, Mr. Clubb and Mr. Cuff, is a hilarious, albeit gruesome, black comedy about the karmic nature of revenge. Those who long for a return to witty, intelligent and literate genre writing need look here. Highly recommended.

Published by Thriftbooks.com User , 20 years ago
I am lucky enough to have a public library which has a great collection of unabridged books on tape, and listened to this book as I went about my business. All of the stories are first rate...inspiring many emotions at once with each disturbingly brilliant episode.One comes to appreciate the short form with these tales. Most, if not all are told in the first person. All of them are enormously humanistic, in that he seems to believe that our lives are shaped by the wrongs done to us....and that evil actions have a reason beyond being just born that way.These little journeys into the lives the walking wounded and damaged tell much about ourselves, and the real terror for many of us is the possibility that between victims and predators, there is a common humanity. And that humanity is not always drawn in shades of black and white.

Published by Thriftbooks.com User , 20 years ago
As usual, Peter Straub writes in a fashion that can be interpreted on many levels. Those who scoff perhaps have little skill in self-evaluation, perhaps deniel of there own dark side. If one reads Straub from an introspective point of view, the result can only be amazing. The psychological depth of the characters is almost bottomless. Straub is not just for the intellectually inclined, it is also for those who are willing to boldly face the truth about the dark side of human nature. Fiction may reveal more truth than non-fiction.I recommend reading these stories with your mind open, even if somewhat obstinately, to the dark side. To your dark side. It is there in all of us. Some show it more than others; but a bold look at it can only result in growth and understanding.Plunge into these Straub offerings head first. Hold your breath. You will resurface in time to breathe again.

Published by Thriftbooks.com User , 21 years ago
Peter Straub is never an easy read, even in some of his mostaccessible works like Ghost Story. Direct comparisons to the likes of Stephen King are fruitless, since about the only thing they have in common is their genre and the fact that the two authors seem to have immense mutual respect for each other. (The best story in this collection, "Bunny is Good Bread," is dedicated to King.) I maintain, however, that Straub is more than worth the effort.While King's work has a consistency of style to it (I am also a huge fan of his writing), Straub's voice tends to change from story to story. The lead-off story, "Ashputtle," has the tone of a seriously twisted, very disturbing fairy tale to it--a psychotic teacher who envisions herself a disenfranchised princess. The next, "Isn't It Romantic," is a tale of an assassin, himself the hunted now, on his last job; it's easily the least of the 7 tales here, despite a good twist ending. "The Ghost Village," set in Vietnam and with some of the characters familiar from the Blue Rose trilogy, has several plot lines, all involving the theme of taking care of those close to you--a solid story.#4, "Bunny is Good Bread," is a stunner--the tale of the childhood evolution of a serial killer. The gradual detachment from reality of the lead character, accompanied by traumatic scene after scene at the hand of his father, is actually painful to read. In my opinion, one of the best things Straub has ever written."Porkpie Hat" is a kind of jazz-tinged supernatural story (although the denouement suggests there may have been nothing supernatural about the events in the story). "Hunger, an Introduction" is a tale about the relation of ghosts to those still on this mortal plain. The last, "Mr. Clubb and Mr. Cuff," is a joy to read--a pitch-black comedy about revenge and its consequences. The (shameless) stealing from the classic Melville tale "Bartleby the Scrivener" only adds to the enjoyment.A very good collection overall, far from deserving the relatively low composite rating it's gotten here.

Published by Thriftbooks.com User , 21 years ago
I've been a huge fan of Peter Straub's since I read "Ghost Story" thirteen years ago. To this day, it's still just about my favorite book. With the addition of the Blue Rose trilogy ("Koko," "Mystery," and "The Throat"), which is also fantastic, Straub has quite a few titles in my short list of all-time favorite books.It's his writing that gets me every time. It's always deeply moving, evocative, and poetic. Reading Peter Straub is like experiencing a richly-woven dream from which you just don't want to wake up.I enjoyed Straub's last collection of short fiction, "Houses Without Doors," but felt it was less satisifying than the novels he had been putting out at the time ("Koko", "Mystery"). The stories in that collection had an experimental quality that worked at times, but sometimes left me feeling they were too bizarre for their own good.There is a similar pervisity in the stories in this new collection, but I think Straub comes closer in "Magic Terror" to doing what he does so well in his novels. "The Ghost Village," one of the stronger stories in the collection, starts with a great Straub opening line and just builds and builds from there. Fans of "Koko" will enjoy revisiting the haunted Vietnam soldiers of that story. "Porkpie Hat" and "Mr. Clubb and Mr. Cuff," two more strong entries, are closer in length to novellas than short stories. "Porkpie Hat," which happily combines Straub's enthusiasms for jazz and the past, is a shere pleasure to read. "Mr. Clubb and Mr. Cuff," a riff on Herman Melville's "Bartleby, the Scrivener," borders on the overly-bizarre, but is more than enjoyable enough to make it worth reading. The prose in this novella is almost downright Dickensian."Bunny is Good Bread" is a harrowing psychological etching of the childhood of a disturbed individual who will show up later in Straub's "Blue Rose" trilogy. The Cinderella-esque fable "Ashputtle" is similarly disturbing. "Hunger, An Introduction" is funny, strange, and stirring all at the same time. My least favorite story was "Isn't It Romantic?," which I felt was longer than it needed to be, and as result was too slow and predictable. But even when Straub isn't in top form, his language is always a pleasure to read. Another down-side to this kind of collection is that if you're a big fan, you've probably already sought out at least a couple of these stories in their original places of publication. Of the seven stories collected here, I had already read three. But it was fun to re-read them, anyway.All in all, these seven tales deliver the reader on a satisfying journey of the psyche, at turns dark and tortuous (also torturous) and alternately achingly poetic. Straub often lingers in the finer spaces where beauty and wonder mix like dreamy liquids with the ether of the human soul. In "Porkpie Hat," he writes that "[a]nyone who hears a great musician for the first time knows the feeling that the universe has jus
Copyright © 2020 Thriftbooks.com Terms of Use | Privacy Policy | Do Not Sell My Personal Information | Accessibility Statement
ThriftBooks® and the ThriftBooks® logo are registered trademarks of Thrift Books Global, LLC