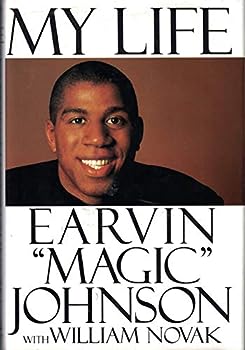 In an inspirational autobiography, the basketball superstar reflects on his boyhood in Michigan, college career, NBA success, teammates, friends and family, the tragedy of HIV infection, and his new status as a role model.

Published by Thriftbooks.com User , 12 years ago
I purchased this book for my husband and he loved it. I think he read it in two days.

Published by Thriftbooks.com User , 19 years ago
Magic shares about his life, basketball and battle w/HIV. He shares candidly and provides insights into his character, work ethic and upbringing. It's a book that's written w/a lot of enthusiasm and passion, words that would also describe Magic. I highly recommend this book.

THE NAME THAT GOT THE GAME

Published by Thriftbooks.com User , 19 years ago
Magic is unlike any other. Some thing special, filled with twists and turns. It is amazing considering what he went threw. He goes threw the ups and downs sum how he seem to keep his head up. This book tells about the old-school player that helped pave the way for the basketball players of today. Great book for the ages.

Published by Thriftbooks.com User , 19 years ago
An enjoyable quick read that offers a lot of down-to-earth things about Magic's life. Growing up in Michigan, describing what school, family life, and basketball was like. He also delves into some of his interludes with some of the ladies, and describes the constant attention given to NBA players on the road. He writes of his HIV infection and how he initially dealt with it. For those who've even casually been exposed to Ervin Johnson on the court or via interviews, he's one of the most relaxed and even-keel people we've ever encountered. Magic is appreciative and laid-back. This will allow him to live as long as people who are not infected.

Published by Thriftbooks.com User , 22 years ago
Magic without a doubt is Something Special.He was The Last Complete Player in the Game.He Could Play Position.but he Proved Himself even Bigger after He Found out he had HIV.He became an Even Bigger Winner Giving Back & Building a Bigger Foundation.this Book Deals with His Days at Michigan State,The L.A.Lakers & His Views around the League.The Man is a Champion on & off The COurt.His Smile is TImeless.A Class Act.
Trustpilot
Copyright © 2022 Thriftbooks.com Terms of Use | Privacy Policy | Do Not Sell or Share My Personal Information | Accessibility Statement
ThriftBooks® and the ThriftBooks® logo are registered trademarks of Thrift Books Global, LLC