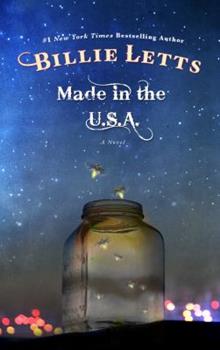 The bestselling author of WHERE THE HEART IS returns with a heartrending tale of two children in search of a place to call home. Lutie McFee's history has taught her to avoid attachments...to people, to places, and to almost everything. With her mother long dead and her father long gone to find his fortune in Las Vegas, 15-year-old Lutie lives in the god-forsaken town of Spearfish, South Dakota with her twelve-year-old brother, Fate, and Floy Satterfield,...

Published by Tylerwasabi , 2 years ago
Everyone should read this book. I laughed, cried and rejoiced at many times. There was NEVER a dull moment. I often get a little lost when reading and have to read things over. Not with this book. My attention was captured every time I opened it up to read. It’s an easy read that’s really good about setting the tone for each scene and scenario. I’m in love. Can’t wait to read it later on in life and pass it down to my daughter.

There are no coincidences with Billie Letts

Published by Thriftbooks.com User , 14 years ago
The fact that Bille Letts has named her book "Made In The U.S.A." is something about which I gave little thought until I was reading the book for a second time. As she has done in the past, Ms Letts takes many elements of American culture and fuses them together to show that it's impossible to define what a real family is, that family values are consistently about respect, love and forgiveness and that the human spirit is stronger than the greatest evil. This book begins with some pretty horrific situations and sadly none of them are so far fetched as to be unbelievable; any person with his ear to the track (even remotely) already knows that what our two central characters suffer from the moment they learn they're children on their own in the world and must run to(of all places) Las Vegas knows that there are stories far worse than this out there every day. in Vegas, the two children slowly begin to lose their souls until taken to safety by a man who is recovering from his own trauma. It's a rescue that comes just in the knick of time and there's a fair amount of violence, just like the real world. We're kept in suspense as they begin to find love and we see that there's the possibility to heal from trauma-not forget it, Billie Letts doesn't pander to us and we wouldn't buy it if she did, but trauma becomes a part of the love we have to offer. Billie Letts speaks a language and philosophy that makes us want to be better people. She understands our culture and is a wonderful philosopher for us. And we are all part of the Country that makes up the United States of America. Ms Letts has never written a book I didn't read at least once, nor have I ever closed the last page without having grown from the experience. I have a feeling, however, that "Made in the U.S.A." is a novel that should be required reading for all politicians, all citizens who have children, teach children or are role models for children. (Thqat cover everyone? Think so) I'm not at all certain that it was President Bush's ruse regarding the Mexican immigrants and how his own family values are the only ones that he feels are appropriate that inspired Bille Letts to write "Made In the U.S.A." but she was certainly living in a country that was slowly deflating in every metaphoric way imaginable as she approached her word processor each morning, so that at the very least-sub textually-she was affected by it. And so was I. In the midst of a time when I am disgusted by our world, Billie Letts reminds me that I should be proud of it instead. It's sincerely a beautiful place. This is a beautiful book.

Published by Thriftbooks.com User , 14 years ago
Billie Letts has done it again! She is a master storyteller! Her stories and characters are so original and I can never put her books down. I disagree with others that say there is too much "sleaze" and she went down the wrong path. Whether you like it or not what happened to Lutie & Fate happens to so many young kids a year. Those sleazy things exhist and good for Billie for letting us know what that life is like and getting a story like that out there. Great job Billie and keep em' coming!!

Published by Thriftbooks.com User , 14 years ago
i read this book cover to cover without any interruptions. more amazing quirky characters from her that you just grow to love.i look forward to her books, especially when im in a reading rut. its always a fun ride with billie letts, and this book for her fans will not dissapoint them at all. shes a blast.

Published by Thriftbooks.com User , 14 years ago
Reviewed by Kam Aures for RebeccasReads (6/08) Fifteen-year-old Lutie McFee lives with her eleven-year-old brother Fate and their dad's ex-girlfriend Floy Satterfield in the small town of Spearfish, South Dakota. Their mother died a long time ago and their father has left them, escaped to Las Vegas, and they haven't heard from him since. While not the picture perfect life, they still had Floy to take care of them. That is until they are shopping in Wal-Mart one day and three-hundred-pound Floy falls dead after buying a National Enquirer at the cash register. When the policeman inquires as to who they have to take care of them Lutie tells them she has an aunt named Julia Roberts who gets off work in a couple of hours. She also lies to the police officer and tells him that she has her driver's license as she proceeds to drive Floy's car home. Lutie knows what is going to happen if they remain in their home and, rather than becoming wards of the state, they decide to take off in Floy's car in an attempt to locate their father. After encountering some scary situations along the way they come to realize their father is not where they think he is and they discover that the world is a rough place especially for naïve and vulnerable children. The first novel that I had read that was written by Billie Letts was "Where the Heart Is," which was an Oprah's Book Club Selection. Amazingly enough that was ten years ago already! I remember how much I enjoyed that novel and her writing style. When I first started reading "Made in the U.S.A" I thought that if this new novel even came close to the quality of `Where the Heart Is" then I would enjoy it. I was definitely not disappointed! I noticed that there were a lot of similarities between the two books. The author seems to have a thing for Wal-Mart, small towns, and unique character names. It is exactly these things that make her novels so readable and enjoyable. I think there are some parts that are a little unrealistic, like when unlicensed driver Lutie leaves Wal-mart in Floy's car as the policeman is watching, and proceeds to bump across a divider, jump a curb, squeal to a stop, and then hit a bumper guard. I think in real life there is no way that a policeman would let her keep driving but I guess since it is fiction after all, these things can happen! All in all, Billie Letts delivers another moving and unforgettable novel that fans of her past work and readers who have just discovered her are bound to love!

Published by Thriftbooks.com User , 14 years ago
You will not get anything done for a few days because you will not be able to put this book down! You will get attached to these young characters who are trying to figure this adult world out alone. They make bad choices and you will be rooting for them page after page hoping someone will help them find their way. You won't be dissappointed. Just forget about the laundry for a few days. (and the dishes, homework, phone calls, husband, children) Just keep reading.
Trustpilot
Copyright © 2022 Thriftbooks.com Terms of Use | Privacy Policy | Do Not Sell or Share My Personal Information | Accessibility Statement
ThriftBooks® and the ThriftBooks® logo are registered trademarks of Thrift Books Global, LLC