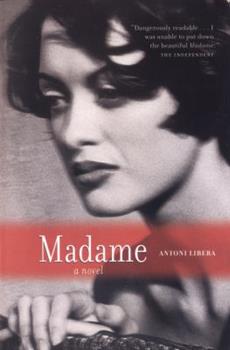 by Antoni Libera and Agnieszka Kołakowska

Madame tells the story of a self-absorbed Polish teenager as he pursues intellectual maturity, and the woman of his dreams, his French teacher 'Madame', in the communist-dominated Warsaw of the early 1970s. Libera paces his exuberant young hero's fulminations, fantasies and discoveries beautifully, building a remarkably subtle characterisation of a free mind in a repressive culture. This is one of those rare novels which reminds us why we love books...

Published by Thriftbooks.com User , 14 years ago
A surprisingly quick and energetic read, Madame is beautifully written and hard to put down. Rarely are first person narratives so effective, it's hard to think of many books that made me so clearly feel a narrator's emotions or see his world so clearly through his eyes. Definitely worth the buy.

Published by Thriftbooks.com User , 16 years ago
Madame, a late debut of the university scholar Antoni Libera, who specializes in Beckett, is an universally prized novel. I liked it too (hence four stars), but some criticism is nevertheless necessary, because it is not a perfect book. The action takes place in Warsaw of the 1960's. The narrator is a high school student, a remarkably erudite boy from a good family (alter ego of the author) who, as nearly all the students in his year, is in love with a school headmistress and teacher of French, the mysterious "Madame". Because of his obsessive nature, and urge to know as much about her, as he possibly can, the narrator sets off on the methodical quest to reveal Madame's past. He discovers the family drama spanning several decades, the example of people's fate decided by political circumstances. The language of the novel is great, very rich, evoking images in the reader's mind; the book is full of interesting characters and the wanderings of the narrator around Warsaw evoke nostalgia. The realism of these times in communist Poland is also remarkable. I was left with the feeling of re-reading it again from the beginning and purchased the English translation for my husband. In translation it was equally engrossing. There are, despite my general good impression, some faults for which Libera was criticized by many readers. Two things in particular come to my mind now: firstly, although I like books which give broad reference to general culture, the narrator, a teenage boy, although, I admit, behaving like many high school students from good Polish schools do, seems to be rather an overintellectualized caricature (and knows suspiciously much about Beckett). I am not sure if it was technically meant to show the distance of the author from the narrator (and, at the same time, his youth). Secondly, the book reads as if it were written with a plan, a goal to reach the foreign reader. It is sometimes too straightforward and the author takes pains, elaborately explaining things or events, which seemed obvious to me... However, I learned a lot from the part describing the war in Spain in the 1930's! Some say that critics should not become authors... I think in case of Libera it is not that bad, although his background seems to be a bit of a hindrance. Nevertheless, although not a complete victory, "Madame", like its heroine, attracts attention till the end.

Published by Thriftbooks.com User , 16 years ago
You were the only bookshop in the world which I could have purchased this book.It is necessary for my graduation.I tried for a long time but you were the only.The book was wrapped very carefully and when I received it,it was in a perfect condition.

Published by Thriftbooks.com User , 22 years ago
The narrator of Antoni Libera's "Madame" is a precocious teenager indeed. He speaks fluent French, can play the piano, recites scads of poetry from memory, is conversant with the works of Shakespeare, Racine, Conrad, Thomas Mann, and Schopenhauer. He is quite an actor who sees life as a chess game full of strategems by opposing forces. Most of all he, born under the sign of Virgo, is madly in love with his French teacher who is an Aquarius and whose name bears the title of the novel. The central focus of the book concerns the narrator's probing into the life of madame and coming to terms with his mad passion for her. In delving into the French teacher's life, the love-struck teenager (and the reader) are taken on a voyage that includes knowledge about the Spanish Civil War of the 1930s, Polish repression of artists, Picasso's work, Racine's Phedre, relations between Franch and Poland during the Cold War, and discussions of the relationship between language and reality. This all makes for an exceptionally good reading experience, despite the fact that the narrator appears to mirror the knowledge of the author (who is a literary critic himself) rather than that of himself. Though "Madame" strains the reader's credulity at times, it can be described as a tour de force written by an author who is cultured, informative, and entertaining. It is a romance that will certainly broaden a reader's literary horizons. Len Bazelak

a story of love affair in politically incorrect times

Published by Thriftbooks.com User , 22 years ago
"Madame", story of the love affair in the politically incorrect times. First, I read "Madame" in Polish. And I loved it. I cherished it so much, I decided to read it in English, and my exaltation about this book has not changed. Kolakowska did a wonderful job translating Libera's crystalline prose, so there is "nothing lost in translation" and even the Poland of the 60's, which from obvious reasons might have lost its credibility in English transliteration, looks reliable and does not miss anything from its horrifying and tragicomic reality. The book tells a story of a high school student, who falls in love with his French teacher in the communist Poland in the 60's. "Madame" is a 32 years old female, whose intelligence and beauty and sort of "western quality" glares into live of the student, who subsequently falls in love with her. Obsessed by a combination of her inaccessibility and elegance he starts to fallow her around and tries to learn everything about her private live. The main theme of the book spins around their evolving relationship, shading light on details of everyday live in the communist Poland. As one progress in his/her reading the connection between the pupil and his teacher becomes even more tantalizing and magical only to unravel into unexpected climax. Libera, a Becket's translator and theatre director for many years, previously not known to large circles of Polish readers, almost overnight became a celebrated author. It all began after the book won a first prize in a national literary contest. Since then it occupied the national bestseller lists and became very popular outside of Poland.
Trustpilot
Copyright © 2022 Thriftbooks.com Terms of Use | Privacy Policy | Do Not Sell or Share My Personal Information | Accessibility Statement
ThriftBooks® and the ThriftBooks® logo are registered trademarks of Thrift Books Global, LLC