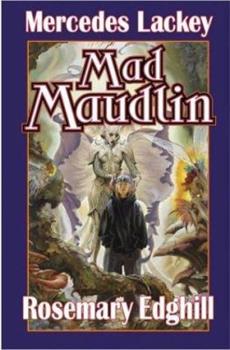 (Book #6 in the Bedlam Bard Series)

Homeless children in New York have created a bizarre mythology about a demon called Bloody Mary who preys on young children. Somehow, Bloody Mary has come to life and now stalks the city's streets. Anyone who sees her is doomed to die - and 17-year-old Magnus has seen her.

I LOVE This Book!

Published by Thriftbooks.com User , 18 years ago
I have always been a fan of the Eric the Bard series. What modern fantasy fan wouldn't love the mix of magic, music, elves and old world legends? Add in one of Misty's greatest crusades (helping children in trouble), and you've got a great read in "Mad Maudlin".Eric is once again facing a hurdle in life. This trial, perhaps, is his hardest: facing his troubled past. Let's face it, everyone has wounds inflicted by past pain, and facing that pain down is an act of courage. Eric has to confront his parents... and learns a shocking piece of information in the bargain.In the meantime, Hosea Songmaker and his haunted banjo Jeanette are out and about the city of New York, with Hosea doing what he can to bring the gift of music to the city's homeless children. In the shelters, he learns a set of "Secret Stories" about a murderous ghost, Bloody Mary. This urban legend turns out to be a lot more than Hosea ever guessed.And, of course, there is a trio of troubled runaways. Ace, who ran from her father's greedy ministry. Magnus, who left a stifling home. And Jaycie, who can come up with rolls of money out of nowhere and spends his time scarfing down blocks of baker's chocolate and cans of Coca-Cola. (Sound familiar to anyone?) These three find themselves bound up in a lot more trouble than trying to find a relatively safe place to live.There are poignant references to 9/11 that had me literally in tears. These references gave me new perspectives on our national tragedy, and helped me gain more learning and perspective about it.All in all, I loved this book, and I can't wait for the next.

Runaways and the Sidhe

Published by Thriftbooks.com User , 18 years ago
Mad Maudlin is the fifth novel in the Bedlam Bard series, following Spirits White as Lightening. In the previous novel, Eric and the Guardians manage to conjure the spirit of the dying Jeanette into Hosea's banjo. They also trap the vengeful Aerune in a maze, with the help of a dragon and Jimmy's spirit, cutting the Paranormal Defense Initiative off from their source of magic. Moreover, Fox finds the means for Kory and Beth to have a child.In this novel, a child of the Unseleighe runs away to the World Above, pursued by his worried guardian. Heavenly Grace, the daughter of gospel preacher Billy Fairchild and the secret of his success, runs away and he is determined to get her back. The teenage son of a proper Cambridge couple runs away to become a rock musician.In New York, Hosea and Jeanette discover that the youngest street children are telling the Secret Stories about Bloody Mary with more fervor lately, then the Guardians link these stories with a series of mysterious deaths within the city. Eric is doing so well in therapy that he decides that it is time to confront his parents in Boston and finds out more than he expected: a younger brother. Some older street children have gathered together around three runaways -- Ace, Magnus and Jaycie -- in the Place; they follow the rules or Ace will not buy them food and other supplies (with money from Jaycie). A conman gathers a cadre of gullible people and build up their magical power to assist him in his ambitions.In Washington, Ria is gathering allies to destroy Parker Wheatly's reputation and organization. Parker unwittingly helps her by kidnapping a minor wizard to restore his source of magic.This novel revolves around the search for the runaways in New York. It involves a mythago, a Prince of the Unseleighe, a conspiracy against the Guardians, and an previously unknown kinsman. It mostly takes place in New York from the Battery to Mid-town, much of it in the world of the street children.This novel continues the adventures of Eric, the Bedlam Bard, and brings hims new friends and enemies. It is overflowing in magic, errantry and suspense. A sequel is forthcoming.Highly recommended to Lackey and Edghill fans and to anyone else who enjoys urban fantasy.

Mad about this book :)

Published by Thriftbooks.com User , 18 years ago
"Mad Maudlin" is an excellent book; it's a direct sequel to "Beyond World's End" and "Spirits White as Lightning." In "Mad Maudlin," Mercedes Lackey and Rosemary Edghill have gathered disparate plot elements and have used current historical events (the 9/11 disaster) in ways to illustrate the meaning in their book.Without getting into the plot too much, let's just say that Ms. Lackey and Ms. Edghill have very strong beliefs about the plight of homeless children, abused children, terrorism, witch hunts, people with differences, and how modern medicine and psychology can help.I loved this book; Eric Banyon has grown from a strung out drug addict to a mature, thoughtful and caring man. And I've enjoyed the transformation; it's honest, candid and real.Go discover this terrific book for yourself!Five stars, highly recommendedBarb CaffreyP.S. There is a definite sequel planned called "Music to my Sorrow." I plan on being on the pre-order list for that one. And I, like Walt Boyes, read this book over again once I was done. It's just that rich, well-detailed, and well done.Wonderful stuff.

Published by Thriftbooks.com User , 18 years ago
This is the third collaboration in this series between Mercedes Lackey, well known for the Valdemar books, and Rosemary Edghill, an eclectic writer of everything from historicals to romance to New Age mysteries (the Bast stories). In many ways, this is the best of the three collaborations. The saga of Eric Banyon, former drunk, druggie and musical prodigy continues in post-9/11 New York. The characters seem to grow and be more fully realized with each new book, and I am glad to report that there will be _at least_ one more! This is a terrific read, and one of those rare books that will support a back-to-back re-read. Hot book! Buy it! Read it! Enjoy it!Walt Boyes(the Bananaslug. at Baen's Bar)

Another hit for Edghill and Lackey

Published by Thriftbooks.com User , 18 years ago
Continuing the story of Eric Banyon, former drunk, druggie and musical prodigy on the run, Edghill and Lackey weave a great story out of post-9/11 New York. This is the third collaboration between Edghill and Lackey in this series, and in some ways, it is the best. The characters are getting deeper, and better realized, and the milieu is more fleshed out. I still think the character of Greystone the Gargoyle is a hoot! One of the best things about this book is the idea that the Unselighe Court might not be the "bad guys" they have been made out to be....but we'll see how that turns out in the next volume, I guess.Go buy this book.Walt Boyes(the Bananaslug at Baen's Bar)
Trustpilot
Copyright © 2022 Thriftbooks.com Terms of Use | Privacy Policy | Do Not Sell My Personal Information | Accessibility Statement
ThriftBooks® and the ThriftBooks® logo are registered trademarks of Thrift Books Global, LLC