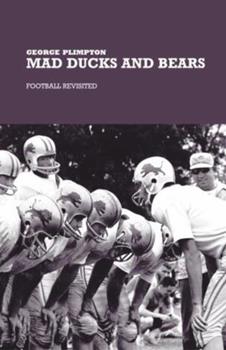 Get the original edition if you can

Published by Thriftbooks.com User , 13 years ago
The 2003 edition of MDAB was released to reflect Plimpton's belief that the chapters focused upon his 1971 return to football, playing in an exhibition game for the (then-Baltimore) Colts against the Detroit Lions, departed thematically from the rest of the book. That was certainly his prerogative as the author, but as someone who really enjoyed the original edition when it came out in 1973, I have to disagree. I felt the "epilogue" chapters comprising Plimpton's "diary" of the 1971 training camp provided a fitting coda to the rest of the book (and to 'Paper Lion,') too -- bringing Plimpton full circle, playing against his former team, and on the final play, being tackled by Alex Karras (actually, the main character of MDAB), on what turned out to be the final plays of his football career (he was cut shortly afterward). The new edition is fine, but if you've read the original edition, it feels incomplete. If you have the chance, seek out a copy of the original.

Not as popular as Paper Lion, but funnier by far!

Published by Thriftbooks.com User , 14 years ago
One of my all-time "must-have" inside-the-game books, right up there with FOUL about Connie Hawkins, MAD DUCKS AND BEARS is nothing short of brilliant... insightful for its look beneath the gridiron turf of the NFL, and asthma-inducing hilarious when author Plympton wisely turns large chunks of the book over to narratives by John Gordy and, to a larger extent, the great Alex Karras, a very droll fellow. In the mid-'70s, this book used to accompany my sight-impaired college roommate and myself on our annual treks around the country to visit other old chums from school, and in the evenings, I would read and re-read passages aloud to him... Gordy's thoughts while lying on the turf of Yankee Stadium with a dislocated shoulder, Karras' recollections of his first days off an Indiana farm at the University of Iowa under coaching legend Forrest Evashevski, and his adoption in training camp as a scared rookie by hard-drinking Lions' team leader Bobby Layne... as we would roar ourselves to sleep. Delighted to see this wonderful volume reprinted! Long overdue.

Published by Thriftbooks.com User , 16 years ago
This book is excellent for an authentic glimpse into the 1960s NFL. It is also very funny and extremely well written. Alex Karras is an eccentric character who provides a barrel of laughter with his off the wall sense of humor. Plimpton, unkowingly, plays the perfect straight man for karras's bizzare antics. My only complaint about this book is that it was such an enjoyable read, I wish there were many more pages.

Published by Thriftbooks.com User , 19 years ago
George Plimpton wants to write a book about the techniques offensive and defensive lineman. The Mad Duck (Alex Karras) and The Bear (John Gordy) will be used for research. Their first meeting for the book places the author, George, in down lineman position in the apartment of one of the men as they hammer him into lamps and such. From there the book takes off on the minds of Karras and Gordy. It is filled with absolute laugh out loud hilarity. The book finishes with Plimpton at Quarterback, but this time for the World Champion Baltimore Colts. Insights to hall of famers Johnny Unitas and Bubba Smith are must reading for football historians. (Smith at a party trying to teach a myna bird his name, "Bubba, Bubba, Bubba"). One also gets introduced to Bob Irsay who dismantles the team. It is a hint of things to come----a move to Indianapolis.

Published by Thriftbooks.com User , 22 years ago
Over 25 years after reading this for the first time, I still remember some of the more hilarious moments: Alex Karras's golf tournament, with the shrieks of wild animals echoing from the woods; Joe Schmidt's basement full of horrible recordings of the Detroit Lions singing The Battle Hymn of the Republic (not to mention the unsold vibrators); Bobby Layne sending Karras out for burgers then abandoning the frightened rookie. Interspersed among the laughs are some wonderful tutorials on the art of football where it really matters--in the trenches with the hogs. Offensive guard John Gordy and defensive tackle Alex Karras, two of the greatest ever to play the game, explain the nearly invisible game of blocking and tackling. This is a sort of cult book for true fans of football and great writing. Come join our congregation!
Copyright © 2020 Thriftbooks.com Terms of Use | Privacy Policy | Do Not Sell My Personal Information | Accessibility Statement
ThriftBooks® and the ThriftBooks® logo are registered trademarks of Thrift Books Global, LLC