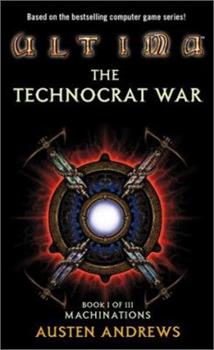 Ultima: The Technocrat War Book I of III: Machinations

(Book #1 in the The Technocrat War Series)

A sorcerous cataclysm has remade the ancient, magical world of Sosaria. Now, past, present, and future are one -- a unity that begins an astonishing age of discovery and conflict. Once separated by time and space, four vastly different civilizations are now on a collision course that could destroy Sosaria forever.

Published by Thriftbooks.com User , 21 years ago
Mr. Andrews has once again proven his worth as a writer. He could certainly do it full time and achieve great success. This book is excellent, and captures the mood and feel of the world perfectly, just as his other works have. The prequel fiction (which Mr. Andrews wrote) for the game that this book is based off of, check it out! If you like it then I highly suggest reading this book. ;?>

Published by Thriftbooks.com User , 21 years ago
I must commend Austen Andrews for the excellent work he did in this novel. Richard Garriot would be pleased on how he shaped the "New Sosaria." The book starts action paced, as the brave knight Montenegro faces down a highly skilled Jukan female. Austen then manages to capture the Knights battle internally, as he goes through his trials of virtue, much like the avatar did in the games. He uses the feelings of each character to draw the reader in, enablling sympathy for the characters. This is a story i highly recommend. Want action? Plot development? Or character interaction? This book has it all, and uses the Ultima world to great effect.

No Ultima background? No problem!

Published by Thriftbooks.com User , 21 years ago
I just finished 'The Technocrat War' and all I can say is: Wow! I had no knowledge whatsoever of the Ultima game/world before reading this book, and I didn't find it a hinderance at all. The world leaps off the page and into your imagination with an almost uncanny ease. The story and characters are so intriguing and vivid that I had trouble putting it down. This is a splendid work, and I look forward to future titles from this talented author.

Definitely keeps you on the edge of your seat!

Published by Thriftbooks.com User , 21 years ago
All I can say is Wow. If you read the prequel fiction for the Ultima Online 2 game (aka "UWO:Origin" or something along those lines), and enjoyed it, this book is a must! It picks up several years after the Cataclysm, with the Meer, Juka, and Humans all co-existing on one world. (For those of you who haven't read the prequel fiction, the Meer and Juka are two new races from two different worlds, brought together by the "Cataclysm", which was a spell Lord British attempted to reunite all the Shards of Sosaria... Needless to say, the spell didn't really work as expected, and a bunch of new worlds were sucked together, the new races along with them...) Lord British is gone (only referred to as "The Lost King", probably due to some copyright issues or something :P ), Lord Blackthorn is.... uhmmmm... "different"... But the world is as exciting as possible. This is the first book of a trilogy, and I can't wait until the next one comes along...It's really too bad the game was cancelled, because these books would have definitely been a must for anybody interested in the game. Now that it's not going to happen, there's probably a lot of bitter UO players who aren't interested in reading about what "might have been"... But this book is pretty damn good. ;)

Published by Thriftbooks.com User , 21 years ago
Austen Andrews wrote the prequel fiction to what was to be an incredible online game called Ultima Worlds Online: Origin. The bad news is Electronic Arts cancelled the game. The good news is the book does not need the game. This is a compelling story of a world in flux from the perspective of three races in conflict. The world is a combination of magic and technology in the finest traditions of man versus man and man versus nature adversity. This book kept me up way too late on successive nights. It can be risky to try new authors, but Austen Andrews will be a name followed for years to come.
Trustpilot
Copyright © 2022 Thriftbooks.com Terms of Use | Privacy Policy | Do Not Sell My Personal Information | Cookie Preferences | Accessibility Statement
ThriftBooks® and the ThriftBooks® logo are registered trademarks of Thrift Books Global, LLC