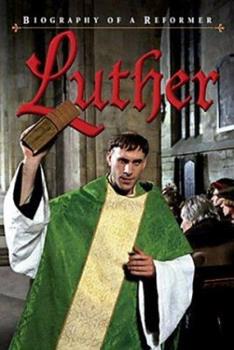 Luther: Biography of a Reformer

Martin Luther had one goal: peace with God. He didn't find it in the holy relics and indulgences of the church or in life as an obedient monk. Luther discovered God's treasure of truth buried under human laws and regulations. He discovered the Gospel in the Word of God. Luther took his stand on that Word, defying the highest authorities in the church and state. In so doing, he started the oldest continuing evangelical movement in history. This is...

A Great Introductory source for all

Published by Thriftbooks.com User , 15 years ago
For Lutherans and all others this provides some of the best history on Martin Luther, what he knew to be right and practiced. This is a very good book for anyone who has no knowledge of Luther's beginnings. All will find this enlightening when you think of where we are today and the influence Martin had on the world before, during, and after the reformation. It's also an easy read.

Published by Thriftbooks.com User , 17 years ago
The noted educator/historian Jacques Barzun noted "The Modern Era begins, characteristically, with a revolution. It is commonly called the Protestant Reformation...." (1) This book presents a concise and well-written biography of Martin Luther who initiated the revolution on October 31, 1517 when he nailed on the door of the Castle Church Wittenberg, Germany a document containing ninety-five thesis. Luther's intent was to bring his ideas to the attention of the church officials by inviting his fellow professors to debate. "In the thesis he objected to using indulgence money to build a great church in Rome and to the pope's claim he had power over souls in purgatory." He further argued that "religion was a personal matter between God and man and that the Gospel of forgiveness in Jesus was all important." Luther from an early age was concerned about his relationship with God and the means to reach heaven. He entered a monastery and became a priest and as a professor at University of Wittenberg he studied the Bible. The text follows Luther as he evolved his Bible based religious philosophy including his confrontational relationship with the church in Rome. The text gives a brief, but good account, of the political aspects encountered. Elector Frederick protected Luther when needed while several German knights believed supporting Luther "...could help them in their own fight against the Roman Church. These men were especially angered at the pope's interference in their political affairs and his methods for draining large sums of money from Germany...." Luther's refusal to recant at the Worms diet, placed him in physical danger so that when returning to Wittenberg his friends kidnapped him and placed him in the castle at Wartburg where he was known only as Knight George. During his stay at Wartburg, he completed a monumental work: his translation of the New Testament into German. Upon returning to Wittenberg, he embarked on a project to translate the Bible's Old Testament into German. His translations of the Bible helped define "the religious beliefs and practices of people around the world, build up the Saxon churches, it also furthered the Reformation throughout Germany and even influenced the development of the German language itself..." While at Wartburg some of his followers began taking matters into their own hands creating chaos. Luther's successful stand against both pope and emperor had given courage to many other religious leaders.... These now came out into the open, leading thousands of people down all kinds of strange paths. The author gives a compact but good narration of the political and theological issues in Germany as the Reformation developed noting that to try and unite the conflicting religious factions, the Holy Roman Emperor (Charles V) issued a call in 1530 for a diet at Augsburg, from which Luther was banned. The emperor was not successful in this effort to reunite the Western Church, but from this meeting the famous Augsbu

Well written interesting book on the life of Martin Luther

Published by Thriftbooks.com User , 18 years ago
I really appreciate the way this book is written. It is written with a lyrical style. It is not dry and boring, as are some biographies. It provides the reader a very compelling introduction to the life of this great teacher of the church. It brings the Reformation to life and helps you understand what the issues were that caused Luther to protest the practices of the church in his day. The book points the reader to the core issues, without getting sidetracked into all sort of theories and myths about the Reformation, or trying to resolve debates and arguments among scholars.This is clearly the book to begin with if you want to learn about Martin Luther and the Reformation.I like the way the book weaves photos from the new Luther movie throughout the text. It is beautifully printed, in clear and easy to read print on quality paper. PLUS it is a hardback. It is quite a good value.

Published by Thriftbooks.com User , 18 years ago
This book is a perfect book to give to anyone who knows little about Martin Luther. Those who do will enjoy it as a great overview and summary of his life and work. It is a sturdy hardback book, that is beautifully produced. The photos in it are from the new movie out about Martin Luther. Strongly recommended.

Published by Thriftbooks.com User , 18 years ago
This is re-release of 1962 book under different title, here released in conjunction with "Luther" the movie. Photos from the film are included throughout the book with the appropriate section of the Reformer's history.The flow is good and follows Luther's life and career. It emphasizes the important highlights of his life, and will provide any reader a substantial overview of this great servant of Christ. Viewers of the excellent movie can benefit greatly from reading this before and after seeing the movie.For those who would desire to go deeper, suggest you start with James Kittelson, "Luther the Reformer", then to go more deeper suggest you see Martin Brecht's classic three-volume set (the best on the Reformer). One should also visit the magazine "Reformation Today" website and their section "Lutheran Bibliography" for further reading suggestions.
Trustpilot
Copyright © 2022 Thriftbooks.com Terms of Use | Privacy Policy | Do Not Sell My Personal Information | Accessibility Statement
ThriftBooks® and the ThriftBooks® logo are registered trademarks of Thrift Books Global, LLC