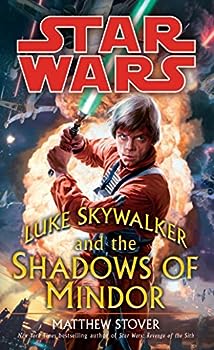 This description may be from another edition of this product. Emperor Palpatine and Darth Vader are dead. The Empire has been toppled by the triumphant Rebel Alliance, and the New Republic is ascendant. But the struggle against the dark side and the Sith Order...

Published by Thriftbooks.com User , 11 years ago
Many of us seem to forget that, a long time ago, we fell in love with a western space opera about a farmboy going up against a legion of planet-destroying space Nazis. Matthew Stover gets this and, with LUKE SKYWALKER AND THE SHADOWS OF MINDOR, he not only creates a story that lightheartedly pokes fun at the movies and what the expanded universe has become, but wholly celebrates the true spirit of the Star Wars that we all grew up watching. Think of one of your favorite works within the expanded universe - books, games, or otherwise - and try to decide whether they could truly function as a true sequel or prequel to the Original Trilogy. That list is decidedly thin. With this book, Stover tries to show us why. To those of you who might not have caught it: this book is actually a story within a story. The Galactic Empire has fallen, and Luke Skywalker is seen throughout the Republic as the hero of all heroes. Countless stories and "holothrillers" have been created with him at the center of it all. Even Han Solo has garnered enough fame to be recognized wherever he goes. But these stories have all twisted and distorted what actually happened. It goes without saying that the final battle between Luke and Darth Vader did not amount to Luke triumphantly cutting down the evil warlord after a vicious battle. It's because of this that Luke decides that he wants someone to get his story straight, once and for all. He enlists the help of Geptun (who fans of Stover will recognize) to write a true account - not a fantastical exaggeration - of what actually happened to Luke. Specifically: at the Battle of Mindor. What follows is nothing short of amazing. This book reads like something that you could only find in the '80s, with its initial emphasis on one bad guy, one good guy, and a predictable heroic conclusion with the good guy using his lightsaber to defeat the bad guy - with Luke Skywalker and the evil Lord Shadowspawn filling those roles respectively. Even the writing of the book itself is full of clever little similes so prevalent from that '80s era of writing I talked about. You also have the quirky and loveable sidekicks: Han, Leia, Chewie, R2, C-3P0, Lando, the whole of Rogue Squadron. Everyone is here! And everyone (and you will not believe this until you read it) talks and behaves exactly how they did in the Original Trilogy. Everyone cracks witty jokes, a lightsaber is used, the dark lord dives into a monologue. ...but then you realize that you still have two-thirds left to read, and it's at that point that Stover pulls back the curtain, making you realize that this decidedly ISN'T the happy-go-lucky Star Wars adventure you thought it was going to be. It does a slow dive into something very dark, and anyone who has read a book by Stover will know: when he writes dark, he writes Dark. This book had me excited the entire way through. Han had me laughing, the way he did in the movies, Leia was still his headstrong counterbalance, and Chewie was

Published by Thriftbooks.com User , 11 years ago
Brief and Selective History of the EU: Zahn Books - Awesome! Jedi academy books - Yikes! (Skips a lot) Vong books - Started out great, ended okay, does anyone even remember the middle? Except, of course, for Traitor, which is the single best SW book I've ever read. Bug books - meh Darth Caedus books - Mixed feelings Jedi outcast books - Last one was great Why do bother with this? Because the best EU stories are the ones that are true to the spirit of SW. Swashbuckling space-action and some interesting philosophy thrown into the mix. SoM is simply a great SW book and a great book overall. The characters are believable--the dialogue just sounded like Luke, Leia, Lando, etc. The portrayal of Luke as a newly christened full Jedi was great. The links to Stovers' Clone Wars book wasn't overdone--on the contrary, the "less is more" approach made wish for more. Maybe I'm biased...Traitors & the novelization of ST:RotS are my two favorite SW books. But maybe STover is just a great SW writer. If he had written some of Legacy of the Force books, maybe the ending wouldn't have sucked so bad. At any rate, this book is great. Any true SW episode 4, 5, 6 fan will not fail to enjoy it.

Published by Thriftbooks.com User , 12 years ago
Another brilliant addition by Matthew Woodring Stover to the Star Wars universe. His books are the only ones that actually delve into the force and give plausible alternative explanations to what the force really is (not the same old "is the force a tool or does it only guide our actions?).The new Fate of the Jedi series is trying to do so (and failing miserably) but just ends up coming out with odd force powers among other things. There are also some physics theories tied into this book, which "interact" nicely with the force and produce some very interesting concepts. The characters were all back to there old selves, except Luke who has a different light shown on him, and his struggle therein is captivating and "horrifying" all at the same time. There are also some returning characters from Shatterpoint and a new antagonist who has a new philosophy on the dark side. I leave you with the advice that you should be prepared to think before you begin reading this book. If you aren't in the mood to do some cognitive processing go watch a movie and save this for another time.

Published by Thriftbooks.com User , 12 years ago
This is a story with a "Classic" Star Wars feel to it. More specificaly, it reminded me of some of the Bantam books. Except for one thing: This is the most heroic interpretation of Luke there has ever been! The pacing is also very impressive. As far as the similies some people are complaining about, they must not have read the last chapter! This is not the first time a Matt Stover book makes you wait for the pay-off. There are some small continuity questions, but they don't deter from the experience.

The Best Star Wars Novel Ever?

Published by Thriftbooks.com User , 12 years ago
I promised myself I wouldn't waste my time on reviews any more...I've even conquered the urge a few times on products I really wanted to steer people away from (looking at you "Innocent Mage"!), but I just couldn't help myself this time. Buy this novel, read this novel, enjoy this novel. I'm not one for hyperbole and I'm not one to hand out 5 star reviews like they are sour-apple candies, but I've actually been asking myself the question in my title. Is this the best SW novel ever written to this point? A few years ago Timothy Zahn was given an opportunity to return to the glorious era that was the Original Trilogy and the surrounding New Republic adventures, an area that is filled with Bantam novels over fifteen years old. It was an amazing gift, one that was magical, and one that was a complete disaster. We got cardboard Han, Leia, and Luke and about 90% of the novel was filled with stormtroopers that no one cared about and Mara Jade. The magic died a death before it could even get started. But here we are now with "Shadows of Mindor" and the promise of this time period has finally been fulfilled one more time. My God, your deity, everyone's deity, what a novel! I've read probably 99% of the SW novels available. I've read SW novels that had great action in them (Stackpole), novels with great villains (Thrawn), novels with a bit of actual literature and theme (Commandos), novels that really had their SW continuity together (Lucendo), and novels that made me laugh (you all know who). I have read a SW novel that did all of those things a hand full of times, and "Shadows of Mindor" is one of them, and its the best one. Stover manages all of that while at the same time nailing each and every Star Wars character. He gets Han, Leia, and Luke right; he gets rogue squadron right; he even gives us the best Chewie and Lando in the EU. But most of all, Stover gets C-3PO and R2 right, and he uses them, and he makes them heroic not scenery. He gives every character something to do and some reason to be there, not to just put them in the novel, but because they are essential to the story. Final Thought: If you are a Star Wars fan, read this. Even if you don't usually like the books, even if you had enough of it all when the New Jedi Order killed so many and drove so many away, even if you were recently disappointed with Legacy of the Force and said "enough of this dark, badly written, wreck". Come back, please...one last time. I promise it will be worth it. Read the Best Star Wars Novel Ever Written. And everyone that has read it...please start praying that Stover writes another.
Copyright © 2020 Thriftbooks.com Terms of Use | Privacy Policy | Do Not Sell My Personal Information | Accessibility Statement
ThriftBooks® and the ThriftBooks® logo are registered trademarks of Thrift Books Global, LLC