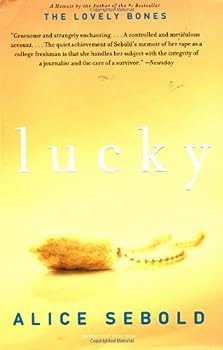 This description may be from another edition of this product. Enormously visceral, emotionally gripping, and imbued with the belief that justice is possible even after the most horrific of crimes, Alice Sebold's compelling memoir of her rape at the age of...

Published by Thriftbooks.com User , 3 years ago
While this book is obviously surrounding a dark matter, it is beautifully written and I whole heartedly believe that everyone can learn a few things from this book- whether it be how to get through trauma yourself or how to put yourself into the shoes of someone who has been subjected to these horrible acts. "You save yourself or you remain unsaved."
Published by Thriftbooks.com User , 5 years ago
Sebold's writing style makes for a heart-pounding, can't put it down reading experience.

Published by Thriftbooks.com User , 17 years ago
Frankly, I liked (if that's a word that can be used about a book concerning the subject of personal rape) Lucky more than The Lovely Bones, her second book, the one that put her on the map. Perhaps `appreciated' would be a better word for my feelings about Lucky. To bare oneself, to detail the experience of rape so unsparingly, to extend the memoir back to her childhood and forward to her downward spiral into heroin addiction and depression is to strip naked for your public. It takes guts, something Alice Sebold has in spades.The book's title comes from a comment by a cop that she should consider herself "lucky" to have just been raped, as another young woman was murdered in the same spot just a short time earlier. Not feeling very "lucky," Sebold proceeds to show how this incident of brutality and violence changed the course of her life.I have heard Alice Sebold speak on several occasions and greatly admire her candor, her honesty, and her insistence on calling rape by its true name. Bravo for this sere and scathing memoir by a remarkable woman and writer.

A TRIUMPH OVER TRAGEDY

Published by Thriftbooks.com User , 19 years ago
Like her wonderful novel The Lovely Bones - which I've also reviewed and which you must read - Lucky is a harrowing, heart-wrenching book about the worst possible thing that can happen to a woman. Alice Sebold tells the raw story of her rape ordeal and her subsequent struggle for recovery with an honesty and warmth which is compelling. Lucky reads almost like a novel itself at times, with gripping moments of suspense, particularly during the court trial scenes.Alice Sebold was the innocent victim of an unforgivable crime - but she doesn't ask for our sympathy or pity in these beautifully written pages. She earns our respect and admiration for the courageous way she tells how the traumatic events changed and shaped her life; how the naive college student would eventually become a hardened, determined aggressor herself in her brave fight for justice against her attacker. Sadly, this natural reaction to her personal violation came with a price - destructive behavioural damage that brought a later downward spiral into drugs. What the author didn't know at the time is that she was suffering from post-traumatic stress disorder; an anxiety syndrome that emerges following a psychologically distressing traumatic event such as rape, which she battles to overcome.Can someone really, truly, get over something so savage and brutal as rape is the numbing thought you're left with long after you put the book aside? The past can never be forgotten, but Alice Sebold has managed to crawl from the wreckage and move on with her life to a happier future that has brought her international fame and acclaim. That says something about the human spirit - and everything about this remarkable woman.

Published by Thriftbooks.com User , 19 years ago
Alice Sebold's Lucky offers a stark window onto the strains and suffering of rape. Sebold's sharp prose, blunt honesty, and rather black sense of humor give the reader that rare feeling of stepping into an author's skin. Where others would shy away, she offers vivid, often horifying picture so that we can know the brutality she suffered. Most importantly, I did not get a sense she was rewriting the history of her attack and her reaction, but rather like she was opening up a journal of dark times. Though at times a hard trip, readers will certainly grow from the experience of reading this work. I urge those interested to read it.

Published by Thriftbooks.com User , 20 years ago
What happened to Alice Sebold shouldn't happen to anyone. That she survived her ordeal at all is miraculous, but that she found a voice with which to describe her experience with clarity, with tremendous insight and with warmth is almost unbelievable, yet this is exactly what she does with Lucky.As a studen at Syracuse University in 1980, Alice is the victim of a horribly brutal rape as she leaves a friends house. The experience understandably shatters her, but even she does not realize the depth of her feelings or the effect they are having on her life and behavior. She eventually sees her rapist again, and takes us through the trial and subsequent events in her life, which are tied intricately to the rape even though she is unaware of it. The afterward picks up ten years after the book opens as she is still battling with the emotional scars that have not yet healed.That anyone can talk about such horror at all is amazing, but Alice really allows readers inside her head, hiding nothing from them. Her painful interactions with her family and friends as they try to do what's best for her, and as she tries to convince them that she's 'recovered' come across as achingly real as they were for her. Readers, too, can see how damaged Alice still feels even as she tells herself that she's not, and I felt myself rooting for this heroic woman throughout the book, hoping that she would find whatever justice that she could and pick up the pieces of her life.This is no maudlin tale, not at all romanticized or sugar coated, which may be difficult for some to take, as it was for me at times. But I kept reading because I was so amazed at what was being offered, that someone was sharing such a personal experience, something that affects more women than most people know. I am fortunate enough not to know someone who has endured a similar ordeal, although I now think I have some very limited insight into what a person might experience. I applaud Alice Sebold for her bravery in putting forth her story, and I think this book is an important one. It's not an easy read nor one to be taken lightly, but I feel that I learned so much from it. And the fact that this book represents Alice's triumph makes it all the more rewarding.

A stunningly honest book, written in a clear voice.

Published by Thriftbooks.com User , 22 years ago
Even before I write a commentary about Alice Sebold's book, I know that a mini-review like this could never do it justice. "Lucky" is an incredible book, written by an incredible author. What struck me most about Sebold's writing is her unadorned honesty. A previous reviewer stated that she found the characters to be cliche. I found the book and characters to be exactly the opposite. While reading "Lucky", I wondered to myself if I could be as open and honest as Sebold writes. Probably not, was my answer. "Lucky" is a book that is written with a clear and honest voice; a voice that stayed with me for weeks after reading the book. And there was humor. Humor which both surprised me--because it struck me that a book about rape shouldn't contain humor--then made perfect sense to me, because Alice Sebold is a human being and humor is one of the functions that human beings employ in dealing with pain. This could have very easily have been a "poor me" book, and maybe some readers have the expectations that it should be more that type of book. One of the main reasons that I found "Lucky" to be as compelling as it is, is because of what it isn't. "Lucky" is not a book filled with self pity. I don't want to say that Sebold's book isn't emotional, because it most certainly is, but the emotions aren't worn on Alice Sebold's sleeves. She writes in a way in which a reader can understand some of the pain and trauma she has gone through (and I can only imagine, still deals with), but that emotion and pain does not get in the way of her being an excellent narrator. The narration in unnerving at times, because of how concise a writer Sebold is. She writes the story of her life and rape (as they are intertwined) in a very straight foward and matter-of-fact fashion. Maybe time and distance have allowed that type of narration to occur. But Sebold's straight fowardness has not resulted in a cold narration. "Lucky" is an incredible book written by a fragile human being; a human being who has bravely written what would have to be one of the most painful experiences ever to occur in anyone's life. In writing "Lucky", I feel that Alice Sebold has presented a gift to all of us. A gift of her pain, honesty, humor and fragility. I thank her for this gift.

Lucky Mentions in Our Blog 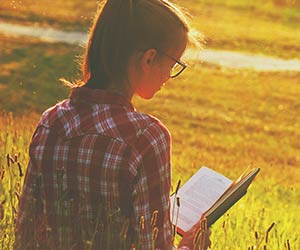 Stories from a Writer's Heart
Published by Melina Lynne • July 07, 2016

I had been in an abusive relationship. Admitting it to myself had its own difficulties, not to mention opening up to my family and friends. Now I had the crazy idea of writing it all down and sharing it with the world. Well, I won’t get too carried away... It wasn’t the world, but all my friends on Facebook and anyone who happened to stumble across my online blog.