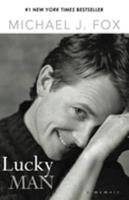 A funny, highly personal, gorgeously written account of what it's like to be a 30-year-old man who is told he has an 80-year-old's disease. "Life is great. Sometimes, though, you just have to put up with a little more crap." --Michael J. Fox In September 1998, Michael J. Fox stunned the world by announcing he had been diagnosed with Parkinson's disease--a degenerative neurological condition. In fact, he had been secretly fighting it for seven years...

this review refers to the audiobook

Published by Thriftbooks.com User , 15 years ago
Although I'm a fan of Michael J. Fox's work, I wasn't likely to read his memoir had it not been given to me. It was a tremendously pleasant surprise!!! He presented his story in a touching and captivating way - not just his plight against Parkinson's Disease, but also his early struggles to establish his career, and his family dynamics. I was impressed with the almost reverent way he spoke of his wife Tracy, an actress with whom I have very limited familiarity but now greatly admire for her strength and her support of him. At times, the PD part of the story got very medically technical, but that held special interest to me as a health professional. It's not just helpful to those suffering from the disease, but also to allow the general public to truly understand what PD patients go through. I also appreciated the unbiased way he explained the stem-cell research controversy, and although he is clearly in favor, I now understand the Catholic church and President Bush's opposition to it (that because they use embryoes created in IVF procedures, there is potential for unethical "farming" and need for stricter control to make sure no one is creating embryoes for the purpose of destroying them for research.) This book totally exceeded my expectations!

Published by Thriftbooks.com User , 19 years ago
I always have an admiration for those who write autobiographies. It seems you are opening yourself up, letting everyone see who you are, learn about your mistakes, but best of all, allow people to see you are human. Michael J. Fox has done an extraordinary job with "Lucky Man". He begins the book by telling of his childhood in Canada, all leading up to his career. He talks then about his insecurities as an actor and a person. If Michael J. Fox has an ego, he leaves it checked at the door. From then, he talks about his diagnosis with Parkinson's. From his feelings that this was his punishment for not being the person he thought he should have been, through denial, anger and finally acceptance, Fox tells the world, that while he is not perfect, he is indeed lucky.I found this book to be inspiring for anyone. It shows that things in life can either change you for the better or completely take over, but ultimately, the choice is yours. Throughout, I laughed, cried and above all, I hoped. For anyone who has ever been diagnosed with Parkinson's, for anyone, anywhere, Fox can teach us all a major lesson in life. And it is even for a good cause. I would give this book my highest recommendation.

Published by Thriftbooks.com User , 19 years ago
Michael J. Fox has always been known as a nice guy. So what has he been DOING in Hollywood? In Hollywood nice guys often finish last. But in Fox's case, he beat the odds. It's no secret that some of the Powers That Be weren't entirely enamored when, as a young Canadian "unknown," he was cast in the role as Alex, in NBC's hit t.v. comedy Family Ties. But when the show debuted he proved that he had that certain "something" -- that rare talent to link up with an audience. Call it "charisma," or likeability but it, plushis considerable acting talents, drove the ratings -- and his show biz career -- sky-high. Now Fox has written one of the most genuinely honest, touching and moving show biz bios ever, Lucky Man. But it is MORE than a show biz bio, because it deals with how his life was impacted by Parkinson's disease, how he coped with it, accepted it and how he wants to help others. Lucky Man should be titled Lucky Us, because anyone who reads it can't help walking away from it a mite richer, inspired, and more appreciative of the fact that the upsides anddownsides of life sometimes coincide...but, overall, it can be a joyous ride. Fox did NOT have this ghost written and it certainly reads like an autobiography written by an actor known for his great sense of irony and sense of humor. All the usualbiographical "boilerplate" material is there about his early years (a military brat who had a normal, well-centered childhood) quick rise to fame (Family Ties was a smash hit, largely of Fox's charisma -- which he is too modest to mention), and glimpses of the REAL show biz world behind the scenes (his account of how Cher snubbed him at an Academy Awards ceremony has already become an instant classic -- about how someone way up there in Hollywood's pecking order seemingly considers someone else not as famous and therefore perhaps not asworthy). But aside from his natural humor, honesty, and the inside Hollywood tidbits, what's going to make this a book that will long be remembered -- and ultimately be turned into awide-screen or television movie -- is how he coped with news about his illness, emerged from denial, and decided to dedicate his life to look for a cure for and to increase publicawareness about the disease. Some chapters may make you cry. For instance, I never knew until I read this that Fox KNEW he had Parkinson's when he signed on to do Spin City. It was only when he felt he had to quit the series to spend more time with his family and his new cause that he did so. In the passages that show him battling alcohol, and coping with his illness, not a word is there for dramatic effect. It's all sincere. I will be forever haunted by the passage where his he teaches his five-year-old son, Sam, how to stop his Dad's involuntary thumb movements, by squeezing his thumb ortwisting it, then counting to give and doing it again. Fox writes of how he saw his son's delight "in getting the timing down

Published by Thriftbooks.com User , 19 years ago
It's seemingly commonplace these days to find celebrity memoirs that are nothing more than braggadocios resumes by celebrities who are past their prime, desperately seeking to hold on to the limelight (and their egos) on the last legs of their showbiz careers.Then there are those who currently remain in the limelight and just want to shove some cause or stance down your throat, while also preserving their egos, and choose to do so under the veil of an "autobiography". You also see the ones by people whose only status of "celebrity" comes by virtue of being related to one.Not to mention the memoirs by dissilussioned child stars or the like.Few books in this genre are as enjoyable, honest and perfectly-timed careerwise, by the author, as "Lucky Man" by Michael J. Fox. It's probably common knowledge now that he has Parkinson's disease. He waited nearly ten years to go public, preventing what would have been inevitable destructive media and public gossip, which in turn allowed him to continue his life and career as "normal". And what a career he has had.Rather than take the sob story route, Fox provides a very candid and humbled look at his life before and since the diagnosis of his Parkinson's disease. He's not bitter. He doesn't ask for sympathy. He doesn't act is if the world owes him anything. Very straight-forward book containing all the wit you'd expect from Fox, along with the refreshing candor, honesty and down-to-earth sincerity foreign to most celebrity memoirs. I highly recommend it.

Published by Thriftbooks.com User , 19 years ago
Starting into any celebrity memoir is always a little harrowing. Will Star X check their ego at the door? Will the sugarcoating be too much to bear? Who is going to be the target of the revenge-inspired smear campaign?That's why Lucky Man is so refreshing. Michael J. Fox has told the story of his life and, more importantly, of his struggle with Parkinson's Disease. LUCKY MAN, though, is no sob story. Fox sees his diagnosis with PD as an opportunity to help. "The ten years since my diagnosis have been the best ten years of my life, and I consider myself a lucky man." this quote sums up the feel of the whole book. Warm, funny and painfully honest, Fox lets us into his life both before and after PD. We learn about his family, his drinking problem and life in Hollywood, but not in the lurid way that some stars tell it. His writing is down to earth and real.Michael J. Fox has crafted an inspirational and important book without relying on cookie-cutter tear-jerking cliche or obvious pity ploys. LUCKY MAN is the best memoir I've read in a long time.
Copyright © 2020 Thriftbooks.com Terms of Use | Privacy Policy | Do Not Sell My Personal Information | Accessibility Statement
ThriftBooks® and the ThriftBooks® logo are registered trademarks of Thrift Books Global, LLC