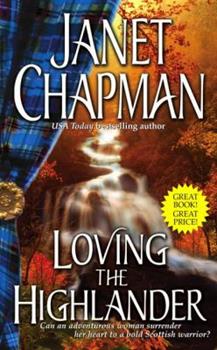 A tempestuous passion begins with a battle of wills...When Sadie Quill comes upon an unbelievably gorgeous man lying naked beside a lake, she can't resist taking his photo -- and is quickly trapped in a passionate confrontation with the fierce stranger. Discovering the identity of this irresistible warrior will complicate Sadie's search for a legendary gold mine. For he is Morgan MacKeage, a medieval highlander in modern-day Maine, a man with the...

I loved all the Highlanders

Published by Thriftbooks.com User , 14 years ago
I read each and every book from this series in order and nonstop. OMG...What an amazing experience Granted there were some characters that I loved thoughout the series. One of the things that most impressed me is we really get to see the happily ever after throughout the series. If you have the money and can afford to buy the whole set, that is the experience that you are shooting for from this author. Chapman is creative funny, and sincere with these characters and you feel the love between main players as well as the family they have around them. After all those books I was still left wanting more. I passed my set to my sister. She calls me at the end of each one to discuss the new characters, the new dynamic they'll create in future novels in the series. Truly a fun read. The best read since my first historical romance (Knight in Shining Armor).

Published by Thriftbooks.com User , 18 years ago
In 1200 AD during a clan battle in the Scottish Highlands, the Druid wizard Father Daar casts a spell that accidentally sends several MacBain and MacKeage warriors into the twenty-first century to include the MacKeage brothers Greylen and Morgan. During the chaos of time transformation, Daar lost his magical staff in a Maine pond. Since arriving and settling in their new century, Greylen, now known as Michael, has married his modern day lover (see CHARMING THE HIGHLANDER).Morgan worries about the impact that Daar's lost staff has had on the surrounding flora and fauna. When Mercedes Quill begins hiking and marking the area for a wilderness park set aside, Morgan becomes concerned that the Highlander secrets will be revealed. He plans to stop "Sadie" from succeeding, but is shocked by his attraction to her as much as by her obstinate resolve. For Sadie it is an affectionate legacy honoring her late father though she finds the weird Morgan quite a loving distraction.The second Highlander time travel romance is a charming tale that readers of medieval warriors displaced will appreciate. The key, as with the first novel, is that the Highlanders have had time to adapt to their new century yet have to courageously confront technological things taken for granted by their beloved ones that seem magical to their psyche. The story line is fun to follow as the living creatures by the magical pond add depth to a delightful "battle" of the sexes. With novels like these two MacBain tales, Janet Chapman shows she is a talent that sub-genre fans value.Harriet Klausner

Published by Thriftbooks.com User , 19 years ago
Janet Chapman's "Highlander Series" began with "Charming the Highlander" - it was such a great read that I immediately ordered "Loving the Highlander" and "Wedding the Highlander". While the second book might not have been quite as good as the first book - I thoroughly enjoyed it! This series is an interesting mix of romance and sci-fi. I absolutely could not put this book down once I got through the first half. Her characters are interesting and the story moves right along. I have really enjoyed Ms. Chapman's books!

Published by Thriftbooks.com User , 19 years ago
Janet Chapman's heroes make my heart race and my toes curl. Bravo! The concept of her Highlander series is fresh and imaginative. It is a time travel series--but the stories start several years after a clan of medieval warriors has been brought into the future. I loved the fact that the men have already adjusted to the modern world and I didn't have to suffer through yet another story with characters learning to use modern appliances. And I found Ms. Chapman's writing to be very smooth, humorous, and comforting. If you're looking for a good romance without bloody murders or sickening conflict, and you just want to get lost in a nice story--the Highlander series is for you. It's the first time in fifteen years I called my local bookstore and asked when an author's next book would be put on the shelves--and I will be waiting bright and early at the front door for Wedding the Highlander.
Trustpilot
Copyright © 2022 Thriftbooks.com Terms of Use | Privacy Policy | Do Not Sell My Personal Information | Cookie Preferences | Accessibility Statement
ThriftBooks® and the ThriftBooks® logo are registered trademarks of Thrift Books Global, LLC