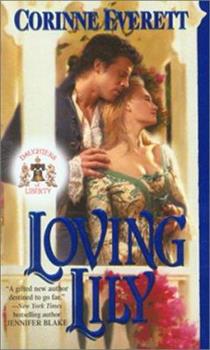 (Book #1 in the Daughters of Liberty Series)

ravel back to the tumultuous 1700s, as passion flowers and love blooms for three vibrant young women...each of whom must confront a thorny challenge to win her heart's desire. From the parlors of... This description may be from another edition of this product.

Published by Thriftbooks.com User , 21 years ago
From the parlors of Colonial Williamsburg, three beautiful women, each named for a flower, aid the Patriot cause. Along the way, they shape the course of their own destinies with their courage and wit. As each faces formidable challenges, each wins the man she loves. This is the first novel, LOVING LILY. Spirited Lily Walters was more concerned with providing for herself and her younger brother than winning a husband, which is how she came to still be single in her early twenties. Necessity brought about a career as a florist, taking advantage of the latest rage in London. Little did Lily suspect how useful her career would be to the Patriot cause. When she realizes her brother Peter has become involved with the Sons of Liberty, Lily determines ways to aid the cause herself. After Adam Pearson arrives in town, and the Patriots begin preparing for war, messages are passed using the specific flowers chosen for her arrangements for the meanings that the different flowers represent. In addition, as Lily moves freely among the Tory's entertainment, she gathers information to aid the cause. Occasional stolen moments with Adam make clear the heated passion between them.Adam curses his many identities; that which was created to protect him now holds him prisoner. He's met the first woman he's ever wanted to offer anything real of himself, and he cannot. As Squire Adare Sotheby, he hosts and attends various Tory events for the purpose of garnering information. In costume, he's a middle aged, crusty fop -- hardly the kind of man Lily would find attractive. As Adam Pearson, late of Boston and former British, he leads the Patriot movement. In Boston his assignment was to infiltrate the Sons of Liberty movement. When his commanding officer becomes aware he left the colony, Colonel Ware follows him to Virginia. Corinne Everett creates a masterful tale of subterfuge, danger, and passion in LOVING LILY. With a creative flair, she weaves a plot that moves quickly along, plunging the reader into a dangerous period of history. The characters are warm and engaging, demonstrating Everett to be a master of her craft. Very highly recommended.
Trustpilot
Copyright © 2022 Thriftbooks.com Terms of Use | Privacy Policy | Do Not Sell My Personal Information | Accessibility Statement
ThriftBooks® and the ThriftBooks® logo are registered trademarks of Thrift Books Global, LLC