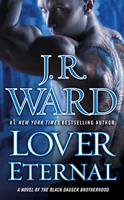 A warrior with inner demons falls for a woman who could save his soul in this seductive novel from the #1 New York Times bestselling Black Dagger Brotherhood series. Within the Black Dagger Brotherhood, Rhage is the warrior vampire with the strongest appetites. He's the deadliest fighter, the most voracious lover, the quickest to act on his impulses. He's also been cursed with two hundred years of hell. Possessed by a beast, he lives in fear of the...

Published by Vamplover , 1 year ago
I loved reading about Rhage and how he copes. This book was well written, addicting and an all together great read. I tried to guess what would happen next and I was always surprised. Excited for the 3rd book.

Published by Roxxeh , 6 years ago
After reading Dark Lover (book 1) I couldn't seem to stop myself! I picked this one up right away and was not disappointed. The storyline in this series is amazing, and the characters are easy to relate too (even though they are vampires). Rhage quickly became a favorite of mine, its a must read for Vampire and Fantasy fans!

Published by Thriftbooks.com User , 12 years ago
I like the story, it's refreshing and sweet. I recommend it. I hope to get the complete series. because the story is very good. once you start reading the book you can not stop.

Rhage Is A Hero You'll Love!

Published by Thriftbooks.com User , 16 years ago
Rhage is a member of the Black Dagger Brotherhood. He is a warrior and with the help of his fellow brothers he fights those that kill vampires living a life of violence and loneliness. Not only does he have his vampire life to deal with there is the added matter of the curse put on him by the Scribe Virgin. It forces him to live a life without being allowed to feel and love...that is until Mary comes into his life. Mary is sick. Her leukemia has come back to haunt her and her options are few and than she meets Rhage. This handsome man is more then she has ever allowed herself to imagine. He's handsome, strong, and he wants her? Will she live to see her own happy ending? First off this is a page turner! Ms. Ward has created a dark but sensual and entertaining series. The romance between Rhage and his Mary is at turns sensual, romantic, and heartbreaking! Make sure you have Kleenex handy. Secondary characters are pivotal to the story and her secondary storyline revolving around the "lessers" continues. This is not your regular vampire read and the groundwork for Zsadist's story has been introduced cleverly. This is a unique and enthralling read!

Another fantastic addition to the series

Published by Thriftbooks.com User , 16 years ago
One of JR Ward's strengths in writing is her ability to weave together the lives of many characters, giving each of the depth and a fascinating personality. In Lover Eternal the main story revolves around the vampire warrior Rhage and the human Mary. Cursed with a 'beast' that emerges when Rhage is angry or injured, he must use physical combat and sex to bleed off his emotions, which is why he's revered among the Brotherhood as the best fighter and lover. But living with the beast has been taking its toll on Rhage. Enter into the picture the human, Mary, who has given up on love and has recently learned that her cancer has returned. What emerges is a wonderful and touching story between two people who are learning to love one another despite the curses eating away at both of them. I have to admit that I really loved Mary's character. She struck me as an interesting and wonderfully independent woman, who is uneasy with the attention that Rhage gives her. Rhage is interesting as well, and is far more complex than one would expect from his glossy exterior. In addition to this story, we are treated to interactions between Bella and Zsadist, the protagonists in the next novel in this series. It promises to be another wonderful read. Truly this is a must buy.

Published by Thriftbooks.com User , 16 years ago
Right off the bat, I have to say that this is the best paranormal romance I've ever read, and maybe one of the best romances, hands down. I've got to give J.R. Ward credit where it's due, although I've been very critical of other authors in this genre. From an analytical standpoint, Lover Eternal is well written, well plotted and extremely well-edited (which is becoming very hard to find in this genre, particularly). It's a quality product from start to finish, although I would have liked to have seen what she'd have done with maybe 5-10 more pages at the end of the book. Whether or not you're a fan of the Black Dagger Brotherhood, whether you think their names are silly or not, you can't help but be drawn into this love story. Rhage (also known as Hollywood to his Brothers) is a vampire warrior who was given a nasty curse by the Scribe Virgin- any time he loses control over himself, he becomes the dragon tattooed on his back. Although the beast is useful in battle, Rhage controls it by having lots of empty, meaningless sex with humans which isn't too hard when you have a face that belongs on the big screen and a killer body. Mary Luce is a human woman who finds out that she's dying of leukemia in her early thirties. When circumstances put Mary in Rhage's path, he's immediately struck by her bravery, strength and beauty (which Mary of course doesn't see). As attracted as Mary is to Rhage, she tries to push him away because she doesn't want him to see her sick and in pain... but he won't take no for an answer. Then again, Mary seems to threaten Rhage's control over his beast and when he tries to resort to his old methods to keep it in check, there are some serious fireworks. Now, if any other male character had behaved this way, I wouldn't have been able to continue with the book. It's a true testament to Ward's skill with her characters that this feels justified. It also feels very genuine, as does the majority of the book which is really saying something given that it's about *vampires*. The alpha male vampire is a character that's been done to death, but Rhage is definitely three dimensional, with a very convincing vulnerability to match his physical strength. Similarly, Mary isn't a common-or-garden storybook heroine, and she compensates for her fears with a core of steel and a level-head. I didn't have any trouble understanding or sympathizing with these two, and through the course of the book I shed tears for both of them. The author's attention to detail and layers within this piece make it a very accomplished piece of work, as well as a truly beautiful story. She even manages to work in the roots for her third book throughout the second half of Lover Eternal in ways that only contribute to this story, instead of over-complicating it. This book is very different to Dark Lover in many ways, which is only right given the differences in the characters and plot. This may sound like a no-brainer, but I am absolutely sick to death of certain
Trustpilot
Copyright © 2022 Thriftbooks.com Terms of Use | Privacy Policy | Do Not Sell My Personal Information | Cookie Preferences | Accessibility Statement
ThriftBooks® and the ThriftBooks® logo are registered trademarks of Thrift Books Global, LLC