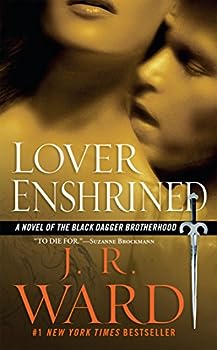 In the shadows of the night in Caldwell, New York, there's a deadly war raging between vampires and their slayers. And there exists a secret band of brothers like no other--six vampire warriors,... This description may be from another edition of this product.

Published by Jai , 3 years ago
J.R. Ward is Amazing! Lover Enshrined is captivating. I was breathless as I followed along to every word. This was a sensual and heart wrenching read. Loved every minute of this book. Highly recommend to all adult readers.

This series just keeps you going!

Published by Roxxeh , 6 years ago
This series is by far one of the best I have had the pleasure of reading through! The characters are so addicting, and the story is even more so! Phury is a wonderful and exciting character to add to the story of the brothers, and one that should not be missed!! Highly recommend this one!

I LOVE this one.

Published by Thriftbooks.com User , 13 years ago
I think this one was fantastic, but I will say that I enjoy these books more for their non-romantic parts. I see this book as completely necessary but perhaps it could have been a stand-alone - not necessarily Phury's story, as it encompasses so many of the other characters' stories. The action is great. The John, Qhuinn, & Blay parts are great. I love Rehvenge, so I'm very happy with this book. Truth be told - I can't put it down. Phury is pissing me off but then again he's never been a favorite of mine. I see him as weak in comparison to the other brothers. I can't tell anyone who is a fan of this series to skip this book because soooo much happens, but just be forewarned that it isn't as much of a love story as all the previous books have been.

FANTASTIC!! but the kindle version is FULL OF TYPOS and BAD EDITING!

Published by Thriftbooks.com User , 13 years ago
I'm not sure why, since I've read this entire series on my kindle and haven't had a problem, but Lover Enshrined, book 6, is edited terribly and full of typos, which of course isn't that big of a deal, but it bad enough to the point that you can't tell when the author has changed from the perspective of one character to another, and makes it significantly harder to follow. It's not the end of the world of course, but I find it really annoying.

Pretty much what I expected!

Published by Thriftbooks.com User , 14 years ago
Man, after reading reviews and knowing full and well about peeps disappointments, I began LEn with zero expectation and finished with happy tears. This particular reviewer was fulfilled and then some. Here's the thing: I like to mix it up, and this book does just that. IMO, there was nothing out of character with Ward's writing with the Brotherhood in LEn. If anything, it just puts you through the ringer with the good, the bad & definitely the ugly: all the more to entice you in. With any good series, I wouldn't want each book to be the same; I'd want each book to bring with it pieces of the series' soul. LEn was definitely the dark sheep of the series thus far, hence making it for me that much more entertaining. It totally made me angry in a good way, and right when I thought I was on an express elevator down... I became elated. I love Phury. I wanted nothing but Greatness for him as it is what he deserves. I wanted him to find love just as poetic as the other Brothers, and to me, he did. In Phury's story, we learn that not everything is sunshine & roses, but, THAT would be out of character of the Brotherhood to begin with. He is just as tortured as his twin, just in different ways. His love is based on simplicity and caring, just as HE is. The fact that they are both 'virgins' (her yes, him in a matter of speaking) makes their story all the more unique. As for the rest of the story, WoW! With all the new characters, developments of older ones & twisted plotlines, I cannot wait to read what happens next with our Brotherhood. Don't compare, just enjoy!

Something More Than a Romance . . . But Still a Romance-- And a Great Read!

Published by Thriftbooks.com User , 14 years ago
LE, like its predecessors, is a big, thick, compulsively readable novel that has two primary goals: 1) delineate the hardship-ridden path the two central characters (in this case, Phury and Cormia) take on their road to a happily ever after and 2) build a foundation for future books. Phury and Cormia do get the lion's share of attention (their scenes together probably add up to the number of pages in a typical romance novel) and just about all the sub-stories (John Matthew/Xhex, Blay/Quinn, Rehvenge, Tohr grieving) involve romantic themes, so I would define this as a romance novel. But it's dark, unconventional in parts, and there certainly are elements of urban fantasy throughout. In short, I read LE in two days and I thoroughly enjoyed it. JR Ward's greatest talent is her ability to immediately pull you into the world of Caldwell, NY and keep you enthralled until the end. What's Good About This Book: -- Phury and Cormia both get a chance to fully grow as individuals as they fall in love. We get an intimate glimpse into who they are, where they came from, and why they deserve a HEA. And unlike LU (which I did like, but felt could have been stronger) the central romance evolved naturally (well, as naturally as it can in a vampire romance with shades of urban fantasy). -- The interplay between John, Blay and Quinn was very well done and made me anxious for future books. I even started to care about Xhex, a character I originally dismissed as a mouthy bore after LR. -- Phury and Zsadist's relationship is given a lot of attention, and that results in some very satisfying exchanges between them. What's Not so Good: -- Reading LE was often exhausting. Let me explain: In each book, it feels as though JR Ward is making a concerted effort to outdo herself. On one level, that's great-- she does grow as a writer. On another level, it's frustrating, because outdoing past books seems to be synonymous with taking things to an ever-darker level. That is, all of Ward's protagonists have to suffer before they find love. That in and of itself is not unique; most novelists follow the traditional "it's always darkest before dawn" path for their characters. But in the BDB books, the protagonists have to REALLY suffer. Like, a LOT. And then they suffer some more. And the source of the suffering gets more and more outrageous. Wrath's blindness was trumped by Rhage's beast was trumped by Z's tortured past as a blood slave was trumped by V raping a male in warrior camp and being castrated by his own father, etc. etc. Rehv is next, and already he's suffering a great deal on an extreme level. I'm not saying these books lack humor; on the contrary, there are a lot of great comedic moments and lines in LE (like the end with the scrambled eggs). But I do worry that all this darkness might exhaust not only readers, but also the series as a whole. Good stories don't always have to be shocking or push the envelope. Overall, I loved this book. JR Ward obviously insp
Trustpilot
Copyright © 2022 Thriftbooks.com Terms of Use | Privacy Policy | Do Not Sell My Personal Information | Cookie Preferences | Accessibility Statement
ThriftBooks® and the ThriftBooks® logo are registered trademarks of Thrift Books Global, LLC