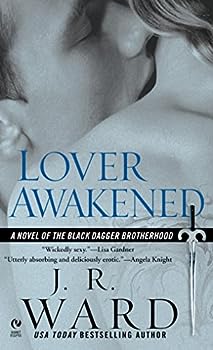 #1 New York Times bestselling author J.R. Ward's ferociously inventive series continues as the most fearsome member of the Black Dagger Brotherhood discovers just how tempting the night can be... A... This description may be from another edition of this product.

Published by Roxxeh , 6 years ago
I couldn't put this one down! I was unsure of how I felt about Zsadist in the beginning, but once learning about his past and seeing how far he has come I gotta say, I love this character! This book, along with the others of the series keep the action packed, romance fueled goodness and keeps it going. This series is highly addicting!

Published by Thriftbooks.com User , 16 years ago
Blood Slave, Zsadist has experienced all the cruelty and deprivation most sane people could stand. He has survived but he is not alive. Or at that was the case until he met Bella. But, numb and unfeeling works for him. He is now living his worst nightmare and he can't seem to wake up. Bella represents all the good and pure things in life and he does not deserve her. He is unclean down to his soul. But, when Bella goes missing he can't get her out of his mind and he moves heaven and earth to find her. Her rescue is going to change everything he has ever thought he knew about himself and the power of love. You know how you faithfully watch a television program and right before they end the season for the year they leave you with this cliff hanger that makes you wish you could fast forward to the future in order to see how it shakes out in the end? Well, Ms. Ward has managed to do that and more. This is a wonderful and creative read. Ms. Ward has taken the ultimate anti-hero (We met Zsadist in previous titles of this series) and made him the ultimate hero. I can't wait for the next in this series. Ms. Ward tapes the readers emotions making these characters come to life. This is a must read book!

Published by Thriftbooks.com User , 16 years ago
If you have read the other books, DARK LOVER & LOVER ETERNAL,by J R Ward you will know the story of Zsadist, if not you are in for a wonderful read. I have waited patiently for his story. He is the most intriging character I have encountered in some time. Zsadist is the brother of Phury, they are twins, but he was kiddnapped as a baby and sold as a Blood Slave. He lived in captivity and torture for many yrs until Phury found him and saved his life. But he was so damaged by his captor that they have no hope for him to ever live a normal life. He seems to only embrace violence. With his scarred face and body he is an anomoly in the Vampire world. Since he is a born warrior he lives and fights with the Black Dagger Brotherhood. They protect the other vampires from the lessers, men who have given up their souls to the Omega, for the power to kill. The Omega wants to destroy all vampires. Bella is a vampiress, who is a friend of the human woman who is bonded to Rhage. Rhage is one of the Black Dagger Brotherhood. There are only 6 Warriors in the Brotherhood now, but Wrath, the king, is haveing some others trained to join. When Bella meets Zsadist she is fasinated and a bit frightened by him. He is so solitary. Later she is kidnapped by the leader of the lessers. She looks like his deceased wife and he clings to her and thinks he loves her. This does not stop him from tortureing and beating her up. She is kept in a hole in the ground and must listen as other captured vampires are tortured and murdered. For some reason her mind turns to Zsadist and she prays for her rescue. Zsadist searches for her with a vengence. Surprising his brothers, he returns to her house many times. Somehow she has reached into the Darkness that surrounds him. When he finally rescues her she is damaged, too. In her pain she turns to him and he struggles to find some humanity in his soul to help her. The brothers are stunned to find him cuddling her in his room, because since his rescue he has been unable to touch and let others touch him. He has refused to eat or feed properly. He has only fed from prostitutes. Touching only their neck. The leader of the lessers has not given up, he is still looking for his "wife". I loved this book and it was so full of new revelations about the Brotherhood. I have enjoyed all three of the books in this series and am now looking forward to the next. Do not miss this one.

Published by Thriftbooks.com User , 16 years ago
I was totally amazed by this third addition. Not only have I been looking forward to this book, but Zsadist is my favorite Brother so far. I was very wary at first, hoping that Ward would not fall into the clutches that so many other talented authors have done during a series. After the first couple of books, the series seems to have been picked up by someone new: the characters are off, the storyline is the same, the heroes and heroines are the same with different name, etc. But MOST DEFINITELY not Lover Awakened!! I was sucked in from the first page. What I love about Ward is that she is able to tell you other stories while spinning the actual main storyline. Mini storylines, if you will. So not only do we get to know about the main hero and heroine, but we are also able to revisit and continue to love previous characters that we have already read about (Wrath and Beth, Rhage and Mary, Thor and Wellsie and John). This was definitely no exception. This way, we don't forget about our previous loved characters and are still able to grow with them. :) Furthermore, not only do we get to see previous characters such as John, but we are introduced to some new ones too that will be playing major roles down the line. The scenes between Bella and Zsadist are very mixed. One scene is very touching and the next is definitely jaw-dropping. "I can't believe she/he just did/said that!" Their relationship is much like a roller coaster. Their emotions are all over the place but because of Ward's wonderful gift, she is able to tie it nicely at the end to make it real. It wasn't annoying like how other stories of the like I've read. Very good job! The scenes with Zsadist and his twin brother Phury were also very roller coaster-like. Both brothers grow to untouched heights and although Phury is still floored with the events with Bella and Z, his critical being at the time learns towards a better life. But, of course, we will see more of that in his own book. :) The character developement was amazing with every character that it touched. The shocking scene at the end proved this. I was excited over the developement, especially in Zsadist. His little actions not only helped himself, but touched everyone whether directly or indirectly. I couldn't be more proud of him. :) This is absolutely the darkest of the three. But it's also the greatest. This book has everything in it: Love, lust, betrayal, agony, friendship, bonds, vengence, lost. It's definitely one not to be missed!

Zsadist's story is a winner!!

Published by Thriftbooks.com User , 16 years ago
J.R. Ward establishes herself as one of the leading authors in vampire romances with her third entry in the Black Dagger Brotherhood series, LOVER AWAKENED. Zsadist suffered horrible abuse as a blood slave for many years and is now unable to bear the touch of anyone. He equates pain with sexual arousal and avoids all the complications involved in any type of relationship or friendship. Bearing permanent physical scars from his past, Zsadist's mere physical presence scares all who know him- except the lovely Bella who reached out to him in the previous novel, LOVER ETERNAL. The novel opens with Bella imprisoned by one of the lessers. The lessers are the enemies of the Black Dagger Brotherhood as they are de-souled humans who sole purpose is to exterminate the entire vampire race. Zsadist is determined to rescue Bella, but his own emotions regarding her are conflicted. Will Zsadist be able to overcome his sordid past? Or will Bella choose to settle for his twin brother, Phury, instead? And what other diabolical plans do the lessers have in store for the Black Dagger Brotherhood? J.R. Ward has cleverly crafted the ideal storyline for Zsadist. LOVER AWAKENED is perhaps one of the most gut-wrenching books this reviewer has ever read. Only Zsadist's story could take the reader to such low depths only to arise to such touching, heart-warming moments. LOVER AWAKENED is a poignant tale of one man's victory over the evils of physical and sexual abuse. Zsadist's character is the most controversial of all of the Black Dagger Brotherhood. His name alone speaks volumes about the despair and anger that has filled his soul. Bella is a complete contrast to him, as she is openly caring and affectionate. As a member of the glymera (the vampire aristocracy), Bella's social station is far different from that of Zsadist, a former blood slave. The relationship between Zsadist and Bella is so powerful it will leave the reader in tears, both of joy and of sadness, as each character learns what a relationship between them will involve. Zsadist's relationship with his brother, Phury, also evolves throughout the novel as Zsadist begins to examine the demons that have driven him for so long. LOVER AWAKENED, like the two previous books in the series, is a multilayered novel. While the focus is on the relationship between Zsadist and Bella, the reader is given further insights into the world of the lessers and their leader, the Omega. In addition, John's story is beginning to unfold and one can only hope he will have his own book one day soon! LOVER AWAKENED packs a powerful emotional punch! While it can be read as a stand alone novel, this reviewer strongly encourages one to read the books in order as only then will the true impact of Zsadist's growth fully emerge. The world building of J.R. Ward is to be commended as her characters and world appear very real and readers are quickly recognizing her talent as an author. The Bl
Trustpilot
Copyright © 2022 Thriftbooks.com Terms of Use | Privacy Policy | Do Not Sell My Personal Information | Cookie Preferences | Accessibility Statement
ThriftBooks® and the ThriftBooks® logo are registered trademarks of Thrift Books Global, LLC