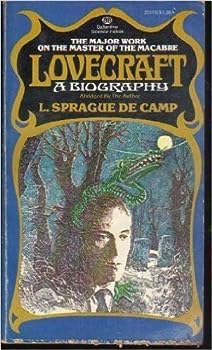 This description may be from another edition of this product. This book is the biography of Howard Phillip Lovecraft, one of the best writer of Gothic horror and fantasy.

Published by Thriftbooks.com User , 15 years ago
Okay, de Camp has been catching hell for this biography for decades. Well, I've read the book, as well as texts by other biographers, and de Camp's work is readable--and entertaining. The structure of the book is well laid out. I like the bits of Lovecraft's poetry used to head the beginning of each chapter, and I do agree with de Camp that the bulk of HPL's poetry to terrible. BUT--the horror poetry-- such as the `Fungi from Yoggoth' is outstanding. Way back, twenty, twenty-five years ago, I read and I learned a great deal about HPL from this biography. I must add, it was the first major work done on Lovecraft's life and that is no small achievement, considering that at the time the book was published, Lovecraft was still a little-known horror writer for the Pulps. de Camp's effort gave HPL's reputation a good and very positive shot in the arm. Positive? How can there be a positive when HPL's racism is such a sticking point. Well, the simple fact is, if you read the book--all the way to the end--you learn how much HLP changed. HLP, the so-called recluse, was very much apart of the world. He married. He divorced. He lived in New York and travel in the South. He was just like anybody else, then as well as now. De Camp treats his subject with care simply by being honest. de Camp showed me a man I could like.

Published by Thriftbooks.com User , 18 years ago
An excellent 'straight' biography of Lovecraft, warts and all. De Camp never met HPL, but spoke to or corresponded with many of his friends and fellow-writers, as well as drawing on Lovecraft's massive epistolary legacy, to create a lively portrait of the writer. De Camp explores Lovecraft's less attractive facets - his pathological racism and snobbery - as fully as his more appealing ones - his erudition, courtesy, personal kindness and gentlemanliness - and gives us a decently-rounded and thoroughly entertaining account of the life and work of the horror-writing Sage Of Providence. Written in the mid-70s, the book inevitably only follows the story of what happened to his work posthumously up till then, though it does cover the founding of Arkham House in some detail. The book's one defect is de Camp's overtly socially conservative outlook, which leads to him framing debates about issues as diverse as Lovecraft's sexuality and the merits of free verse in a way that nowadays seems mildly reactionary and unrewarding. Otherwise excellent.
Copyright © 2020 Thriftbooks.com Terms of Use | Privacy Policy | Do Not Sell My Personal Information | Accessibility Statement
ThriftBooks® and the ThriftBooks® logo are registered trademarks of Thrift Books Global, LLC