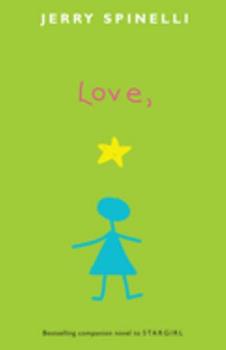 (Book #2 in the Stargirl Series)

The New York Times bestselling sequel to Newbery Medalist Jerry Spinelli's modern-day classic Stargirl ! Love, Stargirl picks up a year after Stargirl ends and reveals the new life of the beloved character who moved away so suddenly at the end of Stargirl . The novel takes the form of "the world's longest letter," in diary form, going from date to date through a little more than a year's time. In her writing, Stargirl mixes memories of her bittersweet...

She Shines Just as Brightly

Published by Thriftbooks.com User , 14 years ago
This was a perfect sequel to Stargirl. An enigma can only last so long, here she is a real character, which she was in the last book but since it was told from Leo's point of view she was a bit clouded, a boy describing his first love... I think this book was wonderful in showing how one person can effect another. Leo was oblivious up until the last few pages of the first book at just how much emotional power he had over Stargirl. He knew the power she had over him, and how she touched those around her. But he wasn't able to understand how everything that happened changed her. In this book we not only get her perspective on those events but on the new people in her life. Her narrative is thoughtful and wonderful. She again shows how she is the best in us all, taking misfits under her wing and guiding them in her Stargirl way, all while trying to heal her broken heart. Its a wonderful story about being strong and moving on from heartbreak. Spinelli once again proves what a master wordsmith and story teller he is.

Published by Thriftbooks.com User , 14 years ago
The one word to describe this book would be simply 'wow.' Being a fan of the first book, "Stargirl", I knew I had to read the second installment. Jerry Spinelli is a genius and has a dreamy, surreal way of dipping into the dusty corners of the human physche and into our favorite sixteen-year-old eccentric's hopes and dreams. Stargirl rules! I loved her from the very first chapter of the first book when she was strumming her ukelele and her rat, Cinnamon, was perched on her shoulder. This book picks up not long after she leaves Mica, Arizona. In the first part of the book, she's very upset about the way that her relationship with Leo ended. She misses him, and she's lonely. In the first one she was more of a fantasy character than anything else, but in this book we see that she is human (though it doesn't loose the magical element that the "Stargirl" possessed). Stargirl makes many new friends of all different ages and backgrounds and still has that unmistakable kindness and compassion for other people. But, somehow, in this book, she seems more real, as if she just does these things. Its just who she is. She's not a dream. She's a real person with real feelings. I had been anticipating this book since June and when it came I screamed. I loved this book, and if you like Jerry Spinelli's impeccable writing and lovable characters, as well as "Stargirl", the first book, you will like this one. Oh, and also, all fans will be very pleased with the ending, I assure you. (I also reccomend Eggs by Jerry Spinelli. I also read this one. It is a display of wonderful story telling and colorful characters, just what I have come to expect from him. Mr. Spinelli is one of my favorite authors.)

Published by Thriftbooks.com User , 14 years ago
I just finished Love, Stargirl by Jerry Spinelli. And I have not been able to pick up another book because I don't want to lose the feeling of satisfaction that came from finishing it. At first, I didn't think that this book could be as good as it's "prequel" Stargirl, but not I'm hard-pressed to say which was better. Love, Stargirl picks up where Stargirl left off. She has left Mica High in Arizona and, more importantly, her boyfriend Leo. The story reads as a year-long letter to Leo as Stargirl lives life as only she can and tries to understand how things went wrong with Leo and what her feelings are for him now. Spinelli brings in a lot of memorable characters. My favorites are Charlie and Betty Lou. Betty Lou, particularly, has a special place in my heart because she gives some of the best advice I have ever heard when she tells Stargirl to live in the now and make the most of each today that she finds. Which, being Stargirl, she does. As the story progresses, Stargirl changes from a stranger to an integral part of her new hometown. Through small kindnesses, unexpected friendships, and leaving behind lots of oranges, Stargirl makes as much of an impression here in Pennsylvania as she did at Mica High-maybe even more. The entire novel, especially the ending, is magical. I am as enchanted with Stargirl now as I was when I read Spinelli's first novel about her. It was refreshing to see this amazing girl's thoughts and hear things from her point of view (the first book is told in Leo's POV). If you aren't touched by Stargirl and her little kindnesses and the beauty of this book, then you are beyond all help. These books are fairly quick reads with straightforward prose, but both are the rare books that I feel strongly everyone should read (definitely read Stargirl before picking up this one since they are basically two parts of one, larger story). I think that if everyone tried to be a little more like Stargirl the world would be a better place.

better than the first

Published by Thriftbooks.com User , 14 years ago
how i've missed stargirl! i loved that she's not the typical girl. i loved that she doesn't care what others think of her. i envy that her mother homeschools her and sends her on interesting field trips. none of that changes in this book but we do get to know her better. the mystery falls away and reveals a girl who is just as vulnerable and confused about growing up as other girls her age. she wants what every girl wants: for the boy she loves to see her, really SEE her and love her entirely. in a series of letters to leo, stargirl tells her own story. she befriends the people others would overlook or ignore. while some might think of her as a busybody, to the misunderstood, she is an angel. her best friend is a 6-year old, her favorite neighbor is an agoraphobic, and the boy she might be interested in is a thief. but in the center of it all, is her heartache for the boy in arizona. somehow, jerry spinelli makes all of this believable and creates characters you can't help but fall in love with. told simply, sometimes poetically, he brings us to calendar hill at the solstice, to the moment when she truly shines. if i wasn't reading in a public place, i may have let a few tears fall. and the ending was perfect. a true stargirl ending.
Copyright © 2022 Thriftbooks.com Terms of Use | Privacy Policy | Do Not Sell My Personal Information | Accessibility Statement
ThriftBooks® and the ThriftBooks® logo are registered trademarks of Thrift Books Global, LLC