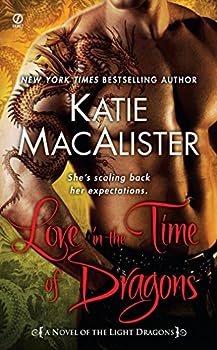 Love in the Time of Dragons: A Novel of the Light Dragons

This description may be from another edition of this product. View our feature on Katie MacAlister's Love in the Time of Dragons . When it comes to love, one woman is scaling back her expectations... Tully Sullivan is just like any other suburban mom-except...

Published by Thriftbooks.com User , 11 years ago
I've always had a thing for dragons, from fearsome Smaug in J.R.R. Tolkien's THE HOBBIT to the flying serpents of Anne McCaffrey's Pern novels, from the Inheritance Trilogy (ERAGON, et al.) by teenage phenom Christopher Paolini to Robin McKinley's resonant DRAGONHAVEN. Not to mention HOW TO TRAIN YOUR DRAGON (although I haven't read the books, the movie version's lead dragon is infinitely endearing). But I'm talking dragons born out of huge eggs, dragons with scales and tails, wings, horns, and teeth. Big. Fierce. Fire-breathing. In Katie MacAlister's world, though, dragons only intermittently (usually when fighting) display these characteristics. They look human, they act (more or less) human, and in the case of Baltic --- the wyvern, or leader, of one sept, or tribe, of dragons --- they are endowed with absolutely magnetic sex appeal. The heroine, and Baltic's soul mate, is named Tully --- or is it Ysolde? She is the married modern mother of nine-year-old Brom --- or is she actually a dragon princess many hundreds of years old who has died and been reborn at least once? Well, she is both these things. Tully (I'll call her that for convenience) has been plagued by what she calls fugue states or dreams, but these, it soon transpires, are really memories of an earlier life in which she and Baltic were mated. Long story short, when Tully's past smashes up against her present-day existence, she has an identity crisis, Baltic returns from the dead (yeah, him, too), and genre-bending high jinks ensue. The alternate universe in which LOVE IN THE TIME OF DRAGONS takes place will already be familiar to loyal MacAlister fans, for it has been constructed systematically over a number of books dealing with various hues of dragons (each sept is a different color and nationality). To novices like me, it took a little getting used to (a glance at the author's website, [...], will help to orient you), but it's clear from the start that two things make this author's fantasy creations more pleasurable and inventive than most: her sense of humor and her spirit of sexy (very sexy) fun. Fantasy can get wearisome if it is unremittingly grave. Although I adore serious sagas like The Lord of the Rings, even Tolkien gave us comic relief (mulish dwarves, feckless hobbits), and it's nice to encounter a book that sets out to be amusing. MacAlister likes to tweak the staples of sitcom drama with weird magic: Brom is a normal kid, except his hobby is mummification; when Tully becomes Baltic's mate, Brom gets a dragon stepfather, a paranormal variation on the blended family; Jim, a Newfoundland dog with a wisecracking verbal style, is actually a demon; Tully is distressed when it turns out she is 300 years old and Baltic (since his rebirth) only 39. And my personal favorite: Tully insists on catering the dragons' sárkány, or formal conference, and threats and negotiations are spliced with random comments about the array of trendy goodies --- tapenade, arancini, cherry mini

I know this just came out 7 days ago, but I'm already excited for book 2!

Published by Thriftbooks.com User , 11 years ago
MacAlister's Dragon books get better with each one, and "Love in the time of Dragons" is BY FAR the best. I laughed so hard, I cried. The romance scenes, while not as plentiful as in the Aisling/Drake or May/Gabriel books, are super steamy. Tully/Ysolde is a great heroine (much less whiny than Aisling was in her books), and Baltic is INCREDIBLY hot. The best part is that Katie Mac finally starts filling in some of the holes that she's been laying since the begining (while leaving lots of new ones, of course). If you haven't read any of the dragon books, you definitely want to start from the Aisling Grey, Guardian novels to really understand this one. Once you get here, you'll be VERY glad you did.

Hilarious Romp With The Dragons!

Published by Thriftbooks.com User , 11 years ago
Ahhhh...Baltic, Baltic, Baltic. For so long, us readers viewed you as one of the bad guys...especially when you helped wipe out many of your own kind. Were we right...thinking Baltic is a big ol' bad guy? Or were we wrong...judging him using circumstantial evidence? "Love in the Time of Dragons" by Katie MacAlister addresses this (as well as other exciting plots) by giving the readers an interesting new(ish) dragon couple - Baltic and Tully Sullivan (aka - Ysolde). Now, I'm not going to bore you by rehashing the plot (which you can read about in the book description as well as the other reviews) but I am going to let you in on why you should read this book. First off, MacAlister has got to be, hands down (or scaly taloned paws down) one of the funniest writers currently. If you've never read her work, I highly suggest that you do...and you can start with reading the Aisling Grey series first (which will give you much needed background info which leads up to this book). I find that she's one of three writers whose humor actually makes me snort...a very unladylike sound, but I'll just claim it's involuntary, kinda like hiccups. Second, read read READ her dragon books to learn about "Jim". "Who is Jim?" you ask...well, Jim's a demon. A big, shaggy, slobbery Newfoundland of a demon. One who is having an illicit love affair with a Cavalier King Charles spaniel named "Celeste". Jim, more often than not, is a fount of information...usually useless information, but funny as Abbadon none the less. If Jim were a man, let's just say he'd have a penchant for Members Only jackets, Miller High Life, and cartoon porn. Don't let his demon heritage scare you...under all that fur lurks a heart of gold. Third, the MEN. Ohhhh...the men. All of these dragons sound soooo yummy. Personally, I can't wait for Bastien's story. I've no idea why, but I just think he's such a compelling dragon. *sigh* Maybe, if I pray to the Gods of Creative Inspiration, Ms. MacAlister will write his story next...complete with a leading wyvern's mate named "Andrea". But I digress... Finally...read Katie MacAlister's work. I own EVERY book she's written & I can say that I pick them up again, once a year, just because they're good enough to read and re-read again. Cheers!

Published by Thriftbooks.com User , 11 years ago
Tully Sullivan is Dr. Kostich's apprentice, a mage-in-training who got dragged into the Dragon's conflict at the end of Me and My Shadow. Except, she's not a mage. Five weeks after she first arrives at Drake and Aisling's house, she wakes up as a guest in Gabriel's London house. She has no idea what has happened, and does not understand why everyone seems to be insisting that she is Ysolde de Bouchier, Baltic's mate. But Ysolde doesn't remember this-- in fact, she doesn't remember much at all, so it's very hard for her to accept any of this. And once Baltic figures out that she's back, things will never be the same for her again. The drama which has been building, all the intrigue which has left us wondering as we've read the last seven books has hit a crescendo with this book. Questions are (at least in part) answered, while yet more arise. By the end of the book (which is somehow shocking and expected simultaneously) you're questioning nearly everything which the characters have taken for granted thus far. The wait for the next book is going to be killer. Originally posted on [...]
Copyright © 2020 Thriftbooks.com Terms of Use | Privacy Policy | Do Not Sell My Personal Information | Accessibility Statement
ThriftBooks® and the ThriftBooks® logo are registered trademarks of Thrift Books Global, LLC