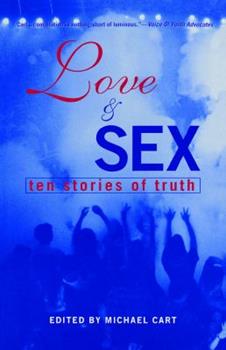 Lust, Desire, Fantasy, Obsession, Love In one outstanding volume, ten of today's finest authors of adult and young-adult literature lend teir talent and their vioces to take a hard, clear look at love and sexuality. From balancing abstinence and desire, to learning the difference between love and lust, to fulfilling a childhood obsession, each of these stories depicts characters exploring a world of new feelings and sensations that is opening up before...

A mixed bag, as always with anthologies

Published by Thriftbooks.com User , 11 years ago
Although I am usually disappointed in anthologies, I was looking forward to reading this one. Love & Sex: Ten Stories of Truth - this title is irresistible and reeks of parental disapproval, does it not? But as soon as I read first two stories, I was about to return it right back to the library. If you can think of the most cliche subjects for teen stories about love and sex, what comes first to your mind? I bet it's something about virginity and saving yourself until marriage ("Extra Virgin" by Joan Bauer) and something cautionary about sex/pregnancy/abortion ("Fine and Dandy" by Louise Hawes. Swallowing my disappointment, I decided to give one more story a try - it turned out to be Garth Nix's "Lightning Bringer." Although it was obvious the man wanted to write a story about lightning and not love and sex, he blended the two very well creating a nice fantasy tale about sexual power. So, thanks to Garth Nix, I stuck with the anthology after all. As always, the collection was a mixed bag of good, mediocre, and bad. It is always evident when a writer has very little experience with writing short stories. Such writers do not understand that a short story requires just as much back story, world-building and plot as a novel and instead produce underdeveloped short outlines. Some, however, stood out. Along with Garth Nix's short story, I enjoyed Sonya Sones's collection of poems of love and lust titled "Secret Shelf" and Emma Donoghue's "The Welcome" - a tale about sexual identity. Michael Lowenthal's "The Acuteness of Desire" stood out for a different reason - a rather explicit account of the first homosexual encounter. As a whole, I found this collection more satisfying than many other multi-author anthologies I've read in the past. I expect some adults will be turned off by the explicit nature of several stories.

Both sides of an issue

Published by Thriftbooks.com User , 11 years ago
"Love and Sex" presents both sides of the sexuality issue, ranging from heterosexual abstinence to homosexual relationships and the societal hardships they face. It is a good read.

About so much more than sex

Published by Thriftbooks.com User , 14 years ago
I actually first picked up the book because of the authors featured in this compilation; the title gave me pause. But what I found within the pages of this book was both surprising and comforting. While there is sex (shocking, isn't it?), that is not really what this book is all about. Each of the stories centers on a character who must make difficult choices that will affect not only his/her adolescence but also the moral character that will carry him/her into adulthood. I very much enjoyed Sonya Sones story "Secret Shelf" because of the seamless prose and main character I first fell in love with in "What My Mother Doesn't Know." I also enjoyed "Extra Virgin" by Joan Bauer because it reminded me of my personal beliefs at that age. And my heart broke for Michael Lowenthal's main character in "The Acuteness of Desire," even though it was about a topic I struggle to relate with. Each story is well written, and the genres vary while still holding any audiences attention and keeping with the theme. Each author is extremely talented, and the characters all ring true.

Perfect for fans of the Writers

Published by Thriftbooks.com User , 18 years ago
I must admit I fist pickes it up becuase I was intrigued by the title... Who wouldn't be? Some of the stories are longer then others but none of them exceed 30 pages. I liked that at the end of all the stories, the authors gave a meaningful explination of the story then there was a short bio about that author that you would most likely find on the jacket of one of their books.I would highly recommened this if you are a fan of any of the authors in the book or even if not, Love & Sex could get you totally hooked on someone new.

Stories for Teens and their parents

Published by Thriftbooks.com User , 20 years ago
"Love and Sex" is a collection of (very) short stories for teens. Each of the ten stories approaches a different aspect of love and/or sex and all the protagonists are teens. The first story is about a girl who wants to wait until marriage for sex -- which may put off teens from reading the other stories which are MUCH more focused on sex itself. As the parent of a teen, I squirmed at much of the material -- graphic and lurid at times (which should keep the teens' attention) but all of which will let each reader know that he/she is not alone in concerns about sex and relationships. Various types of attractions are covered including homosexual and inter-racial. Because each story is written by a different author, each has a different flavor and style. My favorite is a spooky, scf-fi type of allegory about control. All are well written with well drawn characters.
Copyright © 2020 Thriftbooks.com Terms of Use | Privacy Policy | Do Not Sell My Personal Information | Accessibility Statement
ThriftBooks® and the ThriftBooks® logo are registered trademarks of Thrift Books Global, LLC