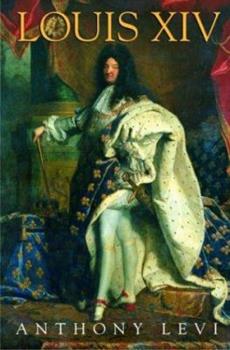 A nation exceedingly rich and extraordinarily powerful, its arts unparalleled in elegance and excellence, France in the seventeenth century mirrored the monarch who ruled it: Louis XIV, heritor not only to the throne of his country but also, supposedly, to the powers of the mythological sun god Apollo. Known as le roi soleil--the sun king--and vested with unprecedented power and privilege, for fifty years Louis epitomized the glory that was France...

Published by Thriftbooks.com User , 11 years ago
As a first introduction to Louie XIV, one could hardly do better than this sophisticated psychological analysis of perhaps the most complex and the most important of French royals. Assuming the throne at the age of four, the seventy-five years of Louis XIV's reign set the initial parameters for the French culture we have come to know and love (and hate). Using his personality as foreground, this book gives not just a skeletal look at French power and culture during the 17th and 18th Centuries though this lens, but the essentials for understanding French political and cultural development since. It is more psychological analysis than history per se, and that is just fine with me. Of equal importance to the unfolding of this story of Louis XIV's personality, is the parallel developments in the backdrop (which will disturb establishment historians, since it almost amounts to a subtext), is France's development as a nation, as a culture and as a world power. It is at this intersection between Louis XIV's personality and its impact on these other developments: French national unity, continuing French power, and French cultural development, that the author earns his pay. Louie XIV, his father, and their respective courts, especially the ministerial advice of Richelieu, Mazaarini, and later Corbert, shaped the French foreign and military policies, as well as the French culture we have come to appreciate. In the early pages of the book the author describes the "Boy King" as being the custodian of France's grandeur. No description could be more apt. Yet, beneath this royal class façade of grandeur, pomp and circumstance was a prickly, insecure, often brutal and always self-absorbed monarch, whose royal pedigree, even today, remains in doubt, and who at various times throughout his life suffered from the less than grand diseases and medical ailments as smallpox, typhoid, gonorrhea, and that all too human of aliment, hemorrhoids. Some things we have historically come to expect of royals: the normal intra-court in-fighting, royal-class debauchery, incest and intra-family marriages, taxing-and-spending the national wealth as if the state's treasury were a royal ATM machine, using war as a pretext to unify and rally a nation to a common cause, establishing, promoting and maintaining the moral and cultural styles for the nation, and then covering up all of the royal failings so that history will never know the full truth of their ineptness. And of course, extreme royal sensitivity (to match the royal ego) to slights to the royal dignity. In all these areas, the book does not disappoint. It provides the reader nothing less than a menu from a royal banquet. However, what we did not expect, and what we get as a bonus is how an over-populated, profoundly illiterate nation could evolve into a sophisticated "bottom-up society" that, towards the end of his reign, was pushing the (by then) decadent and anachronistic King, into the 19th Century. It is a book t

Published by Thriftbooks.com User , 15 years ago
I bought this book in the bookstore at Versailles. After my tours of the palace and the gardens looking for ghosts and wondering what life was like and what was in the heads of the people at court of Louis XIV. This is a very readable yet scholarly history book. It doesn't get into the head of Louis XIV quite so well as Antonia Fraser was able to do in her biography of Marie Antoinette, "Marie Antoinette The Journey". Louis XIV doesn't quite become a real person in the pages of this book however it is a beginning. This is one of the better written histories I have found.
Copyright © 2020 Thriftbooks.com Terms of Use | Privacy Policy | Do Not Sell My Personal Information | Accessibility Statement
ThriftBooks® and the ThriftBooks® logo are registered trademarks of Thrift Books Global, LLC