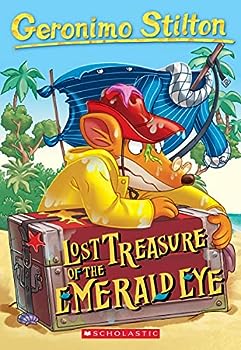 Lost Treasure of the Emerald Eye

Re-enter the world of Geronimo Stilton, where another funny adventure is always right around the corner. Each book is a fast-paced adventure with lively art and a unique format kids 7-10 will love Who... This description may be from another edition of this product.

Published by Thriftbooks.com User , 16 years ago
If you are looking for a new book series, this should be it! There are 24 books out so far, and I have read them all. They are funny, clever, and have lots of funny mouse jokes. They are perfect for ages 7 and up, and come out bi-monthly. They are the best series of books ever. They originally came from Italy, if you're wondering. They are great, so read them ALL!!

Fun, humours and pleasant to the eyes

Published by Thriftbooks.com User , 17 years ago
There's one fine line between well-played and over-played layouts. The full Geronimo Stilton series falls into the well-played category: the outcome is pleasant and not too loud and the fonts / colour used are really a statement on their own. Another point to note is the translation involved. While this is not "literature" literature, the adaptation in cultural and linguistics aspect are well taken care of. I don't know any Italian but have compared the Chinese and English versions of the same book (yes, my colleague at work has the entire Chinese series while I'm catching up by matching the English version). The funny bits are transformed elegantly. Recommended to not only children, but anyone who's intersted in translating humour and layout.

Published by Thriftbooks.com User , 17 years ago
As my 8 year old son would put it. Geronimo Stilton series is the FIRST book series that my son is willingly reading. The use of different fonts, colors and most of all humor in the book is what has kept him captivated. My 6 year old who is reading "Junie B Jones" chapter books has picked Geronimo as well. Geronimo books are packed with references to popular culture, all re-worded to match the mouse vocabulary. And my son finds it particularly fun to "translate" mouse terms into something that he uses everyday. For example New Mouse City (New York City), Mousific Ocean (Pacific Ocean), San Mouscisco, etc. I would also applaud to the translator who did wonderful job on the books translating them from Italian. We could hardly wait fo the next installment of the series. So, in short, if you have a reluctant reader in your family, give Geronimo a try. It might just do the trick!

Geronimo Stilton is the Greatest Mouse Author Ever!!

Published by Thriftbooks.com User , 18 years ago
I thought this was a really good book. My favorite character (besides Geronimo Stilton) was Geronimo's cousin, Trap. He is very funny. Thea finds a treasure map and she gets Geronimo and Trap to go looking for the treasure. The scariest part of the book was when the Lucky Lady sank! The most exciting part is when Geronimo finally sees the Emerald Eye!I also like the way the book is printed with the words being different colors and styles. It has lots of pictures and maps too. It makes it easier for me to read it. I am going to read all fifty titles as they are translated from Italian to English!

Published by Thriftbooks.com User , 18 years ago
Geronimo Stilton, editor-in-chief of The Rodent's Gazette, and author of numerous books featuring exciting stories that are tastier than Swiss cheese, is pulled into a mystery, when his sister, Thea, discovers an old, mysterious map that shows a faraway island, where there is a secret treasure hidden. Being the adventurer that Thea is, she decides to go to the island and find the secret treasure. Of course, she demands that not only Geronimo accompany her on her trip, but also their cousin Trap. Now the three of them are on an adventure that they will never forget.The Geronimo Stilton books are a cute new series for kids of all ages. Geronimo is a very intelligent, and fun character, as are his crazy family members (Thea, Trap, and Benjamin). While many children's books are very repetitive, the Geronimo Stilton series is something very fresh, and original. Filled with beautiful illustrations, a map of Mouse Island (Geronimo and the gang live in New Mouse City), and a listing of everyone who works at The Rodent's Gazette, Geronimo Stilton is sure to be a hit with all. Even adults.Erika Sorocco
Trustpilot
Copyright © 2022 Thriftbooks.com Terms of Use | Privacy Policy | Do Not Sell or Share My Personal Information | Accessibility Statement
ThriftBooks® and the ThriftBooks® logo are registered trademarks of Thrift Books Global, LLC