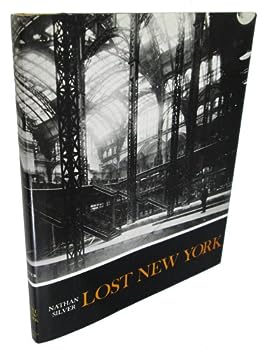 Rare and vivid photographs recapture the beauty of old New York City buildings that have vanished forever, such as the original Madison Square Garden, landmarks from both World Fairs, the old... This description may be from another edition of this product.

Nice but Could be Much Nicer

Published by Thriftbooks.com User , 16 years ago
The original version of Silver's ode to New York City's architectural ghosts was compiled almost forty years ago, so it's nice that this revised edition was released in 2000, with a ton of new photos and revised text. It definitely belongs on the bookshelf of anyone with an interest in the modern history of Manhattan. That said, the book is very poorly designed and would benefit from a total makeover. The photo size and placement follow no discernable grid or system, and the text and photos often don't match up, forcing the reader to flip back and forth. More annoyingly, there's no standard system for captioning or dating the photos, except for an "Illustrations and Sources" section at the back. So, I read this book with one finger permanently stuck in the back so I could flip back and forth to get a sense of the eras I was looking at -- very cumbersome. It also would have been really nice to have a map at the front with the photos matched to it. While the photos are obviously archival, the reproductions seem curiously flat and fuzzy. This may be due to the uncoated natural paper the book was printed on, but they would benefit from the contrast a bright white paper would provide as well as new scans and some careful retouching work. So, this is a neat book, but could become something really excellent in the hands of a good designer.

Published by Thriftbooks.com User , 18 years ago
Mr. Silver has a poetic prose style, revealing a most poetic soul, and frames his message of architectural conservation and adaptation through a highly effective personal lens of incredulity and nostalgia, articulating what most readers subconsciously knew but probably never take the time to think about: that architecture is the most accesible and inescapable reminder of urban culture at a given moment; that while culture evolves and architecture becomes artifact, these artifacts can often continue - through thoughtful planning and incentives - to live and to serve without economic detriment to their owners; and that rapacious, self-serving obliteration of our architectural past is the obliteration of cultural evolution and memory. I would like to see Mr. Silver now produce a companion volume to LOST NEW YORK, a book about what has been saved.

A Success on Two Counts

Published by Thriftbooks.com User , 18 years ago
IF the reviewer below is really Nathan Silver, I congratulate him on the shift of gears from his 1968 version of LOST NEW YORK to this one. (Even if it's not him, I congratulate him anyway.) The first edition was heavy on the preservation/conservation debate while this one is more reflective and personal. In both instances, however, Mr. Silver has made an incredible contribution to the study of New York history--not just its architecture, but to the thinking that went into the creation of these lost structures, and the lack of thinking that destroyed them. Like Jane Jacobs, Mr. Silver shares a passion for the city and how its monuments, public buildings and spaces, and private residences have a direct and fortifying effect on its citizens. The photographs are stunning, as is the quality of the printing. Mr. Silver's text is equally powerful and just as relevant. At times the effect of seeing these representations of a lost time, and reading about their ends, can be upsetting; the sense of loss is very powerful. But there is a point to all of it beyond the seeming nostalgia: we had better start appreciating those gems of the past that are still rooted in the schist of Manhattan before they wind up in the next edition of LOST NEW YORK.One last note: As rebuilding begins on the site of the World Trade Center (a part of lost New York that wasn't our fault), this book indirectly compels New Yorkers to participate in some forward-thinking. It makes one wonder, not only what was lost to us, but what will we give to future generations? Rocco Dormarunno,author of THE FIVE POINTS

Published by Thriftbooks.com User , 20 years ago
The book Lost New York by Nathan Silver is one of the best photo and information books ever writen. Old photos and information on land marks in New York City which have been torn down. Shows you how buitiful a city is but also how little care some people can have for it's treasures

A wonderful book about lost buildings in NYC