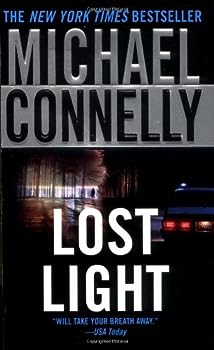 In this New York Times bestseller, retired LAPD detective Harry Bosch wants justice for a murdered production assistant -- but without his police badge, can he take down a powerful and ruthless... This description may be from another edition of this product.

Connelly is a master

Published by Thriftbooks.com User , 13 years ago
I have read every one of his books. They are all wonderfully entertaining, beautifully written. The words just flow so smoothly and the characters are beautifully "drawn". Connelly never fails to amaze me with the brilliance of his writing. One of my top ten writers of all time. The character Bosch is very special and illicits much pathos because he has so much depth of feeling. I also love James Patterson, Capote, Bernard Cornwell, Patricia Cornwell, Larry McMurtry (probably my favorite of them all), just to recommend a few of the really entertaining writers.

Retired but not finished

Published by Thriftbooks.com User , 14 years ago
Retired from the LAPD, Bosch refuses to rest. He carried away several of his old cases that continued to haunt him, and is determined to find justice for a young woman's death. Angela Benton was a production assistant for a movie being filmed and Harry had been removed from the case when it was linked with the theft of $2 million from the movie's set. Neither case was solved, but Harry is obsessed with finding out what really happened. In this book, since Harry is off the force he finds it more difficult than ever to discover the answers he needs, but as those who know and love Harry Bosch are aware, he won't let anything or anybody stand in his way while he tries to discover the truth. A definite recommend from me!

Policing Cold Cases without a Badge

Published by Thriftbooks.com User , 14 years ago
You can quit the force, but can you get it out of your blood? Clearly not based on this excellent novel about a retired Harry Bosch seeking justice for a murdered woman. But can you at least get away from the police politics? Maybe so. Maybe not. Why can't Harry leave a cold case alone? The dead woman's hands were "directed upward from her head, as if she were reaching out to someone, almost beseechingly, begging for something. They looked like the hands from a Renaissance painting, like the hands of the damned reaching heavenward for forgiveness. In my life I have worked almost a thousand homicides and no positioning of a fallen body ever gave me such pause." The advantage of being retired is that you have plenty of time to work on one cold case. The disadvantage is that no one has to help you. Harry Bosch always finds a way, driven by the cruel memory of the dead Angella Benton. One thing connects to another, and soon Harry is seeing that appearances may be deceiving . . . and intended to fool the casual observer. Then Harry steps his foot into something very delicate, the heavy feet come down on him. Harry doesn't like it, and he's more determined than ever to get to the bottom of the murder. Opportunity, motive, and alibi all turn out to be important to solving the crime. But Harry also notices some things that don't add up . . . but doesn't draw the right conclusions until the end of the book where you and he are in for a big surprise. This is one of the better Harry Bosch stories, and it marks new ground for the series.

Published by Thriftbooks.com User , 19 years ago
From his first incredible book, "The Black Echo," LAPD Detective Harry Bosch has had one mission and one mission only as he sees it-to speak for the dead. To bring justice to those who have killed and some measure of comfort, no matter how small to the victims left behind as survivors. When he retired, he took his watch and his files and thought his mission was over.Instead, while he does not have the authority of the badge any more, he realizes as time passes that the mission remains. In particular, a case from a four year old unsolved murder begins to work its way into his mind. Angella Benton, an employee of Eidon Productions, was found dead in the vestibule of her apartment building. Bosch was assigned the case and was working it days later on a movie set when the set was robbed of two million dollars during a brazen daylight robbery shootout. Bosch would wound one robber, none of whom were ever caught, and the money was never found. After the robbery and the resulting high profile glare of the media, the Benton case was pulled from Bosch and folded into the robbery investigation and given to two detectives from Robbery Homicide. Days later, while eating lunch, one of the detectives was killed and the other permanently paralyzed in a robbery at a neighborhood bar.That was a death knell for the case as cops are a superstitious lot and there are always new cases that demand immediate attention. But Bosch without a badge is just as aggressive as he was when he carried the shield. He may be retired, but he still goes at it the only way he knows how and soon seems to have antagonized his former bosses as well as other parties. Before long, old friends are annoyed, a federal terrorism task force is involved and unhappy, as well as numerous other shadowy figures. Once again, violence comes home in more ways than one, but no matter what, Bosch won't stop.As in the other novels of this enjoyable series, Connelly looks deep into the dark abyss that lurks within everyone where life is cheap and greed in the moment wins out over human decency. At the same time, by using an unexpected plot twist, one of several at the end, Harry is redeemed and temporarily at least, finds the peace and solace he has sought for in novel after novel.While this book reads like it might be the final one in the Harry Bosch series, which has had one heck of a run, I hope not. If it is, Michael Connelly has fittingly ended the series by exploring and further developing his signature character. He has done so in new and unexpected ways while adding plenty of action, an intriguing core mystery as well as additional secondary storylines, and a fine plot. This is a top notch read and proof of why he is simply one of the best crime writers in the business today.

Published by Thriftbooks.com User , 19 years ago
It was her hands he would never forget... The unexpected call from Lawton Cross brought it all back to him. Standing at the crime scene, detective Harry Bosch remembered how Angela Benton's hands seemed to be reaching toward him, begging him to solve her murder. He worked the case for only four days before the company she had worked for, Eidolon Productions, was involved in a major robbery. Eidolon was in the process of shooting an action flick about a mob heist and had contracted with BankLA to borrow two million dollars in real bills to use as a prop. The hold-up occurred as the armored truck arrived on the set to deliver the money. Two million, gone without a trace. The case was immediately reassigned to Cross and his partner Jack Dorsey over at the elite, Robbery-Homicide squad since as a production assistant on the movie set, Angela had intimate knowledge of all aspects of the money delivery. Cross and Dorsey worked the robbery/murder until they were unlucky enough to be gunned down while eating lunch during a barroom robbery. Dorsey never knew what hit him and died at the scene. Cross wasn't as fortunate. He was left a quadriplegic, living a life filled with indignities, pain, and misery. But now four years later, he's beginning to remember things about their unfinished investigation, and he wants Harry to start over and rework the case. And Harry's intrigued. Now retired for eight months, after twenty-eight years on the force, he's bored and lonely, looking for direction and happy for the opportunity to reopen a cold case that has always haunted him. And he soon finds that their are forces much larger and more dangerous than the brooding, uncorruptable Harry Bosch at work here who want this mystery to stay buried and unsolved forever..... Michael Connelly's intricate plot is tight, tense, and compelling as his seemingly unrelated storylines twist, turn, and finally come together in an explosive, knock you off your feet climax and clever, unexpected ending. His prose is eloquent and entertaining, and filled with vivid, evocative language, crisp, gritty dialogue, and riveting scenes. But it's Mr Connelly's brilliant characterizations, that as always, make this book a stunner. These are complex, fascinating, real people captured on the page, and he is able to breathe life and magic into even the most minor player. For those new to Michael Connelly and Harry Bosch, start at the beginning with The Black Echo, to get the real flavor of this series, and read them all. For those who are already fans, Lost Light doesn't disappoint and belongs at the very top of every mystery/thriller lovers's "must read" pile.
Trustpilot
Copyright © 2022 Thriftbooks.com Terms of Use | Privacy Policy | Do Not Sell My Personal Information | Cookie Preferences | Accessibility Statement
ThriftBooks® and the ThriftBooks® logo are registered trademarks of Thrift Books Global, LLC