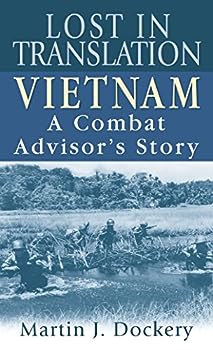 Offers a firsthand account of the role of American military advisors during the Vietnam War, describing the author's experiences with an infantry battalion of the Army of Vietnam (ARVN) in the Mekong... This description may be from another edition of this product.

Published by Thriftbooks.com User , 14 years ago
The book moves fast and gives one the feel of being there. Its style is almost Hemingway. The geopolitical views are beautifully reasoned. A great perspective on the times and on these times.

Published by Thriftbooks.com User , 16 years ago
Terse and void of embellishments Dockery chronicles his frustration with moral compass to ultimately discover self actualization as tenacious warrior turn civilian. I highly recommend this book for Policy Planners and those interested in histography, volunteerism, and Asian American Studies. Especially potent for those compelled in the circuitous rational, that ground conflict establishes a venerated democratic value system. The reader is left to speculate as to why entrenched corrupt civil war settings consistently prompt this "Christo-American" reaction. Dockery's voice is original, masterful, and commanding. Weaving a penetrating insight on the human condition with its flaws and zeniths making this reader suggest that Random House Publishers keep a pulse on additional Dockery writings, clearly he has more to contribute. Read it twice, time well spent.

An enterprise doomed from the start

Published by Thriftbooks.com User , 17 years ago
This is a very worthwhile account of one young officer's experience in the early years of America's Vietnam War when President Kennedy sent a couple of thousand advisors to Vietnam to show the South Vietnamese Army how to fight their war. Reading Dockery's account it is incredible that anyone really believed that seasoned Vietnamese commanders, many who had a totally different agenda, would take advice from a few fresh-faced Americans. Query? Are we in the process of making the same mistake this very minute in Iraq? The reviewer is the author of "Killed In Action..." a book about the other end of the Vietnam War, told through the life of SP4 Stephen H. Warner, an anti-war activist, who was drafted and killed in action while serving as an Army journalist in February 1971.

All the reasons we went wrong in Vietnam.

Published by Thriftbooks.com User , 18 years ago
Dockery list in a clear and concise manner all of the reasons for our ultimate failure in Vietnam. From the arrogance of our views of people and culture to our total misunderstanding of the influence of the dead on a culture. This is a must read for anyone who needs evidence that the military is not in the business of winning the hearts and minds of a people. Thanks to Martin Dockery for sharing this long overdue piece of American military history.

One man's war in Vietnam

Published by Thriftbooks.com User , 19 years ago
Every vet has his unique experience and Martin Dockery's is a worthy read, a page turner. Arriving in Saigon '62, he (age 23)was the field combat advisor to an ARVN (Army of the Republic of Vietnam)Battalion commander (age 45) with 25 years of military and combat experience. The pair had vastly different backgrounds -- cultural, religious, philosophical, educational. In addition language was the source of misunderstandings and many frustrations between the two, hence the title of the book. The isolation of being the only American with the Battalion certainly drew on Dockery's inner qualities. His service in Vietnam came to an end because he contracted malaria, hepatitis, dysentery, skin fungus and worms. A very ill man was taken to the Philippines for medical care.This memoir takes us from Dockery's growing up in White Plains, NY, his education, Vietnam experience (his views on the war and many interesting stories about the people and the land). He completed his military service in the Army's "Old Guard," telling of his duty at President Kennedy's funeral. Law school and years as a bond attorney followed, not without more interesting tales.I found this a very "honest telling" of a young man's growth and his desire for adventure. He found more than his share!! It's a reflective piece, clearly written; as he says after 38 years of gained perspective, he might "make some sense of it."I highly recommend this good read!
Trustpilot
Copyright © 2022 Thriftbooks.com Terms of Use | Privacy Policy | Do Not Sell My Personal Information | Cookie Preferences | Accessibility Statement
ThriftBooks® and the ThriftBooks® logo are registered trademarks of Thrift Books Global, LLC