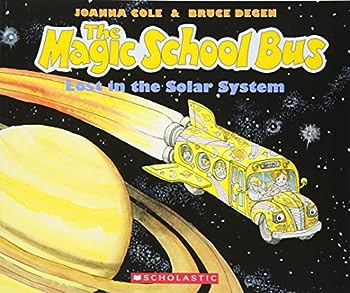 The Magic School Bus Lost in the Solar System

(Book #4 in the The Magic School Bus Series)

No 3d glasses with book!

Published by Hannekemom , 9 months ago
The book is great, as are all the others in this series. It's geared toward being seen through enclosed 3d glasses, which were NOT with the book! It was a big disappointment for my granddaughter.

Published by Thriftbooks.com User , 18 years ago
Not content with what Earth has to offer, Ms. Frizzle takes her class on a field trip of outer space for the fourth installment of this acclaimed science series, "The Magic School Bus: Lost in the Solar System." Joanna Cole and Bruce Degen are bright as ever in their latest out-of-this-world adventure.The Friz was already planning for this field trip at the end of her previous voyage, "Inside the Human Body." She informs her students that they're "going to the planetarium to see a sky show about the solar system." And since the kids have already swam through water ("At the Waterworks"), dug up rocks ("Inside the Earth"), and been digested ("Inside the Human Body"), an afternoon at the planetarium seems like a walk through the park. Or, better yet, through the solar system!There is only one thing dimming everyone's shining star. Arnold's cousin, Janet, is visiting for the day and she isn't exactly the quiet type. She's a regular Ms. Know-It-All, expressing her opinions whenever she feels like it. "I know all of you will be nice to our guest," says Ms. Frizzle. And with that, the class blasts off for the planetarium.However, it looks like the Friz's mission has been grounded. The planetarium is closed for repairs! But that's when the magic school bus takes matters into its own hands. If you can't bring the stars to you, simply go to them yourself!The students in Ms. Frizzle's class learn all sorts of interesting facts about outer space. They get up-close and personal with the other eight planets - Mercury, Venus, Mars, Jupiter, Saturn, Uranus, Neptune, and Pluto. They are educated on universal bodies such as the Asteroid Belt, meteorites, the Sun, various moons, and rings of the planets. They even find out about things such as gravity, orbits, sunspots, various temperatures in space, etc.Then something happens that threatens to end the students' quest of knowledge through the solar system. What will Ms. Frizzle do? And even though Janet is a bit haughty, is she the only one that can save the entire class from drifting off into space?Once again, Cole and Degen prove they have no boundaries. Mixing humor and truth - and not to mention a dose of drama - author and illustrator lead Ms. Frizzle's class and readers alike on an intriguing journey of the solar system. Written in 1990, "Lost in the Solar System" is yet another solid effort from all those involved. But would you expect anything less at this point?The end of this book, like the three before it, has useful information on what was fact in the story and what was made up. And, like she's done three times before, Ms. Frizzle leaves the reader another clue as to what spectacular exploration she has rolled up her sleeves during our next encounter. Dolphins, fishes and sharks - oh, my! If her outfit is any indication, readers had better start packing their diving suits right now!As Ms. Frizzle herself would say, "Buckle up, class. We're going down!"

Published by Thriftbooks.com User , 19 years ago
The Magic School Bus Lost in the Solar System is one is a series of science adventure books by Joanna Cole and Bruce Degen (Illustrator), all of which are trulky excellent. The chart the adventures of Ms. Frizzle and her class as they go on some really interesting field trips.The books operate on several levels. They work as adventure stories as the manner in which they get diverted from an ordinary school field trip to the adventure at hand is always entertaining. The illustrations are truly wonderful and add to the story line very effectively. The books do in fact contain a lot of basic information about the topic at hand, so your kids are actually learning something as they read. And, as a final bonus, the books always involve some sore of class socialization issue, so your kids are exposed to some real life classroom issue, (here it's a Miss know-it-all type) and strategies for dealing with them as well. On top of all that, the books are just plain fun.A great series for late pre-schoolers and early elementary age kids. So, what are you waing for? Jump on the Magic School Bus and have some fun!!!

Published by Thriftbooks.com User , 19 years ago
Magic School Bus Lost in the Solar System By Joanna Cole Illustrated by Bruce Degen In the beginning of the story the class is going to the museum. But it is closed for construction so Mrs. Frizzle pulls a lever and they blast off in to space. The first thing they go to is our Moon then the sun then Mercury then Venus then Mars. Then they come to the Asteroid Belt. They lose Mrs. Frizzle and on the way back to Earth they find Mrs. Frizzle in the Asteroid Belt. And in this book Arnold's cousin comes with them and she keeps on touching Mrs. Frizzle`s things when she is gone When she is lost they tell her not to but she does anyway. This book tells me all about the universe. And the plants and when they get back to earth they make a project about the Solar System. I think that anyone could like this book. I say it would be good when you are studying the universe. That is the time you should read this book. Like I said it could be good for everybody I'm 9 and I still like this book so I bet you will to. I like this book because it is very interesting.

Published by Thriftbooks.com User , 21 years ago
I really like all my Magic School Bus Books. I liked traveling to all the planets and learning. The book doesn't have any newer facts about space. I also bought the Arty the Part-Time Astronaut Book with CD. Using these two books I learned everything about space I needed to know for school.

This book is a must-have for a study of the solar system.

Published by Thriftbooks.com User , 23 years ago
Ms. Frizzle and her class are delightful. This book is a must-have for children interested in the solar system. The students in my second grade class thoroughly enjoyed it. It is PACKED with information. My students even asked if they could take notes! The book has sparked such excitement about the solar system that I find myself searching for more books to feed their interest.
Copyright © 2020 Thriftbooks.com Terms of Use | Privacy Policy | Do Not Sell My Personal Information | Accessibility Statement
ThriftBooks® and the ThriftBooks® logo are registered trademarks of Thrift Books Global, LLC